Showing posts from September, 2012
Show all

I am actually in a very much frustrating mood now, because: There will be this blood donation campaign held in Kurnia office 'today' and they have all these awesome sponsors (OK lah maybe not that awesome, but cheapskate me prefer a decent goodies bag) and my friends told me usually a quite-big scale of blood donation campaign like this, they offer additional services like free body checkup etc (OK lah maybe it's just some extreme simple BP test etc, but cheapskate me appreciate such services dearly).

I've been hearing about this campaign since the beginning of the month and have been looking forward of it ever since (In a boring land like this, even blood donation campaign can make you hype)

HOWEVER, my hormones always LOVE to tease me, mock me, and it's all wrong timing. Few days back, I had all this pre-menstrual syndrome coming together, the headache, upset tummy etc, and I hoped it would have given me at least a …
Post a Comment
Read more

Last Sunday, I joined this Zumba Party held in Seberang Jaya, Penang, along with Theresa, L.Jynn and Ai Ling. The venue is at Safira Country Club*. It started at 9am and finished at 1pm. YUP it is 4 hours of dancing and moving ecstatically!

*Funny and speechless thing is that, I always thought the venue is at an SMK, because I saw the word 'MK' at the address and never bother to read the whole thing LOL)

I had a flu few days before, those itchy throats (luckily no severe cough) and running nose thingy. The sickness seemed to get worse on Saturday morning, with all the yellowish and thick nasal mucus, and both my left and right nose holes stuck, so I bought some meds at the Chinese pharmacy store.

We departed from Perlis at 5pm, had a late dinner at Gurney's Chicago Rib House (good gracious nice food!!!! Multiple thumbs up!!) and overnight at Theresa's mom's apartment. Nice view!

As the registration started at 8, we head out from Island as early as 6.45!! Met up w…
Post a Comment
Read more

Once Upon A Time

September 24, 2012
*Spoiler alert!!! You have been warned*
"Once Upon A Time" is one of the 'stocks' I have in my hard disk. Now that I finally finished watching the season finale, it is one of my favorite too!

It begins with a 28-year-old woman, Emma, a bail bond agent (still can't understand the nature of this occupation), who is one day being approached by a boy, Henry, claimed to be her son. He brings her to Storybrooke, where every fairy tales characters are trapped without knowing their true identity, to break the evil queen's spell, or shall I just quote the opening:

"There is a town in Maine... where every storybook character you've ever known is trapped between two worlds, victims of a powerful curse. Only one knows the truth, and only one can break her spell."
"Once upon a time, an evil queen banished every storybook character you've ever known to our world. Who knows the truth, and who can break the spell?" That pretty much tells the genera…
1 comment
Read more

The Chronicles of M&M: It's Been A Year!! 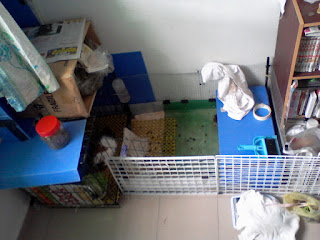 It's been a year!!! So that would mean Biggie Man is about 1 year 2 month old and Little Moz is 1 year old.

One year ago, I finally decided, I wanted a pair of guinea pigs, the very first pet I have for myself. (Honestly and seriously. Yes I have dogs back in my hometown, but mom is the one 'compellingly' fully in-charge, my responsibility is only playing with them)

A year ago, both of them were the size of my palm, I could easily grab them and put them on my palm, freaked the hell out of them. I think that's when they started frightened of me, and they still scared of me =( Failed bonding attempts =( Besides failed bonding, they also fail in toilet training, so I think that makes me not a thumbs-up owner? -_-


This is their temporary cage layout while I was away for the weekend. The half-cage-half-solid-floor setup is to make my house-mate's life easier when he cleans after them. The green color mat thingy is a mosquito net, so their pee would flow to the cloth unde…
Post a Comment
Read more 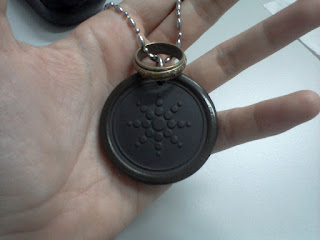 Few years back, mom bought this quantum pendant for all of us, kept saying the good things like it is made from volcano rocks/ashes, the benefits, the advantages, etc etc, until we jokingly mocked her (in a good way!!) that wearing the pendant can give us superpowers! Plus, mom emphasized that... it is 'NOT CHEAP'. By 'not cheap', mom's response was "it's not cheap lah, wear it! It's for your own good."

We usually won't go against mom, and it's just a pendant, so I've been wearing the pendant for... I donno 3-4 years?

From time to time, I read articles about the side effect or hazardous effects it may cause to human, because it emits unsafe level of radioactivity. Somehow, recently, the news about these quantum pendants get heated up, there's even claim about AELB* banningthe pendant, which sounds rather bad.

*AELB is Atomic Energy Licensing Board, I've been there few times for seminar and applying the company's license or…
Post a Comment
Read more

September 12, 2012
This clueless and speechless 'thing' happened yesterday, when I thought yesterday was 10th, FOR THE WHOLE FREAKING DAY!

Funny thing was, I checked my phone for date, wrote the 11/9 on my note book and 'account' book for few times, and still I thought it's 10th!!

Why is it so important that I remembered the date wrong? Because...

I sent her a birthday message last night at about 10PM local time (approx 12AM in Brisbane) to wish her happy birthday (to show how 'accurate and early' I am LOL), without realizing anything wrong... until I heard the news on 12AM talked about 911 attacks 'which has just passed and yadda yadda', then I hurriedly checked my phone... and yes, it was 12th Sept.

LOL! My mind must be in a big mess hahahaha!! Wondered if this is going to happen on my own day?
"What's wrong with everyone? My birthday is tomorrow, yet everyone is wishing me today!!"