10 of us going, 11 of us coming back.
No, we did not bring any 'entity' back with us. Uncle Sunny went a day earlier than us and came back with us.
Verdict: 2D1N cycling trip is too damn tiring :(

We gathered at Genting Sempah McD R&R as the take off point. Luckily for me and Hon, we managed to find a mamak shop opened at Batu Caves to have our breakfast, the others had to make do with the only stall opened at the R&R.

It was drizzling with light rain on the departure day so we had to delay our departure time from 7am to 8am as the rain slowed down a little. The first 10-20km was mostly downhill so it would be wiser to go on a better weather.

On the way, all of us had a fair share of whining, rain-mud puddle + bad road condition = pain in the ass, literally. We arrived Bentong just in time for brunch, but thanks-but-no-thanks to the Raya holiday, the place was jam-packed with cars and humans!! Thankfully, we came with bicycles, so we tried to waltz our way around to find a place with empty seats, which was such a big challenge.We quickly settled our meal and continued on. During the itinerary discussion (I was not part of it because I was tagging along only lol), Rex proposed a detour to Chamang waterfall which everyone agreed on. Hon thought the waterfall was on our way towards Raub, but nope, everyone was wrong and didn't expect it was actually a one-way-in-one-way-out journey. Instead of 'a part of the journey', it was actually a 20km add on yikes!


Not only that, the road to the waterfall gets narrower and reach a point of bottleneck where all the cars were stuck uphill! Thankfully, again, we were on bikes, and I couldn't stop humming happy songs while overtaking all the stuck cars heeeeee! 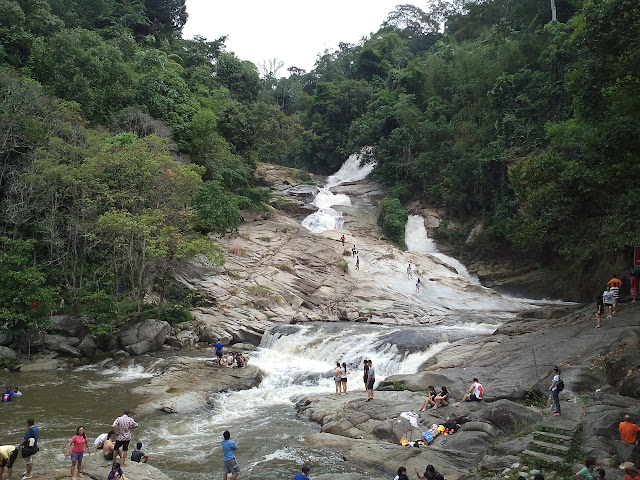 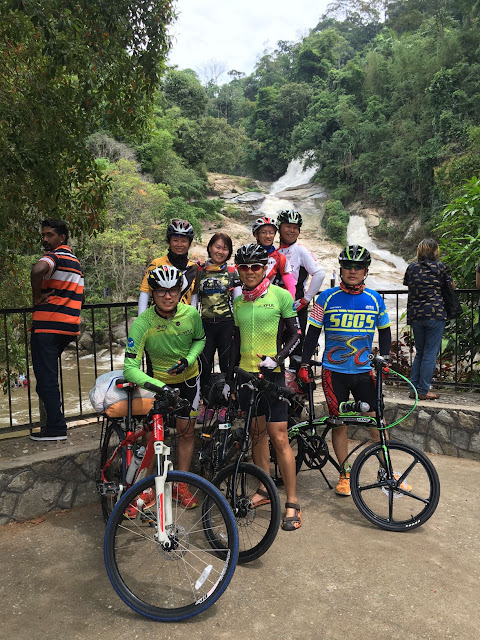 Good gracious the waterfall was so huge and beautiful!!!

I was reluctant to go into the water because of the long cycling pants and the shoes and whatnot, but they managed to 'lure' me into it regardless lol. 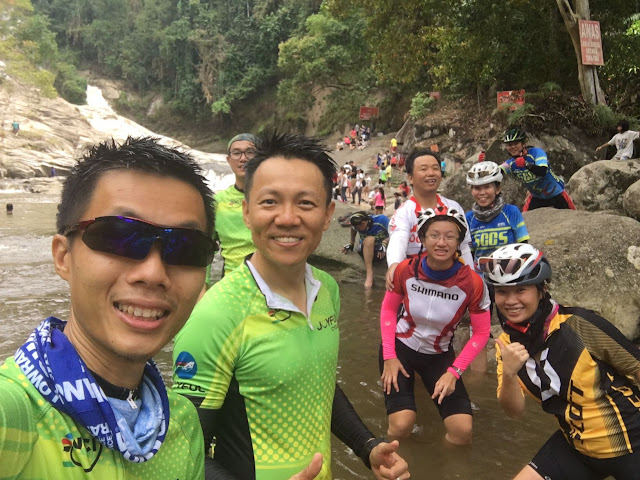 Cleaned up, water in, gear up, and off we went again.

We used the alternative route to Raub from Bentong, and oh boy that was some TOUGH CLIMB!!!

We all know so well and hate so much about the encouragement talks like "KEEP GOING! You're almost there!!!!!", or "5 more min to go!!! 5 more min....... to the signboard" =_= We laughed and cursed and sighed and puffed and gasped and paddled and paddled and paddled. I rolled my eyes all the way to the back of the eye sockets and swore at the top of my lung everytime a hill showed up OMG.

Rex kept reassuring us about this Durian landmark thing which meant we were half way there, and ironically enough, at one of our regroup and rest point, there was indeed a durian statue. 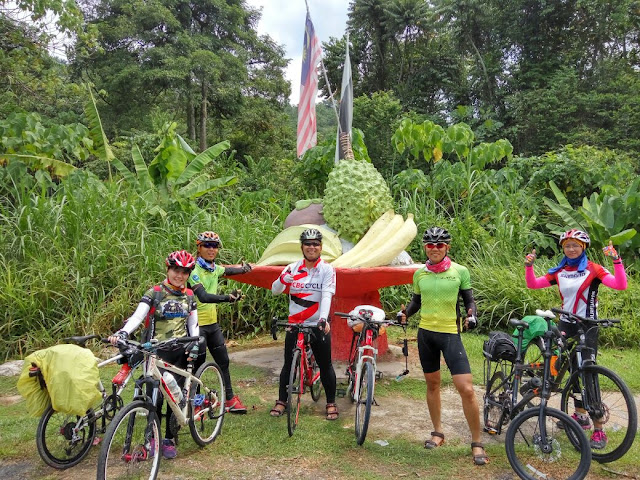 When we were finally at the Durian statue, Rex was like:"YES!! Good job guys! Another 20km to go!" WHATTTTTT?!!?

The traumatizing uphill rides didn't end like that. When we finally arrived Raub, we went up the wrong hill while looking for our homestay. For crying out loud, Raub people all stay uphill one!!! OMG!

We had our dinner at the famous Restoran Ratha. Their famous dish is the curry fish head, and it doesn't disappoint. The squid/ sotong and mutton also very nice. Only downside - expensive loh.

Some wanted to have beer so we went to the only convenient store that some knew - Tunas Manja. 5 of us (me included) were detached from the large group and got lost a little, when we finally found our way to the store, the two BFs so gan jiong waited outside LOL! Who ask you guys go so fast and never look back!? =P

The almighty housewife Winnie cooked us all Luo Han Guo for the heatness of daytime ride; bought watermelon to beat the heatness as well. The gang sat at the garden outside for more chit chat but me the 不合群 one went to bed lol.

The next day, our planned departure was 7am. If it was up to Hon and I, we would definitely stay another night sigh.

We used the 'highway' on our way back as it was about 8km shorter than the way we came, and it was a wise choice too as the downhill can get us going without paddling for almost 2-3km! Woohoo!

Our joyful ride ended when we arrived Suria Hot Spring Resort Bentong. The last 20km was the worst. Mostly uphill, my thighs were soaring, my ankles were feeling funny-ly, I was so exhausted it reminded me of the hike to Nuang few years ago that I cried at the end of the hike, just like this one but I didn't. I didn't cry, I mean. LOL. Hon stopped when I said I felt like crying, he fed me water, and there I saw, the roof of the RnR building! 到了到了到了!!

IMO: I find 2D1N bike touring is a little too rush and tiring, in fact, there wasn't really a 'touring' involved, just cycling. I don't blame them as they only have 2 days break and have to go to work the day after. It would be wiser to fit in one more day to actually tour the place. Even though going to Hatyai is shorter, there's no way I want to do it 2D1N. Just sayin'
OH, and we realized a bike stand aka tongkat for the bicycle is so important! Often times we had to stop at random places to rest and regroup without any trees or poles or something to lean our bike on, it was quite inconvenient.
cycling trip