August 15, 2016
Went to Phuket for a 2 days conference, a collaboration between UniMAP (my Uni) and PSU - Prince of Songkhla University, Thailand. The schools that are in-charge of this conference are Computer and MicroE, which are not the school I'm in, so I didn't know 99% of the staffs/lecturers there, except Fan Yun haha! I stick to her all the time LOL!

The conference was on Thurs & Fri. I only decided to go two weeks before the date, FY got a lil upset coz she booked flight ticket back on Fri afternoon. If only I decided earlier she would have stayed longer yikes! She is such an angel coz despite my indecisiveness, her offer of letting me crash her room still stand til the very end hehe! She is one of the committees so she gets a free room, and thanks to this/her, I spent so little on this trip!

The bus journey took 12 hours!! I sat until my butt hurts and my back sore.

The conference took place at Graceland Resort in Patong, Phuket. 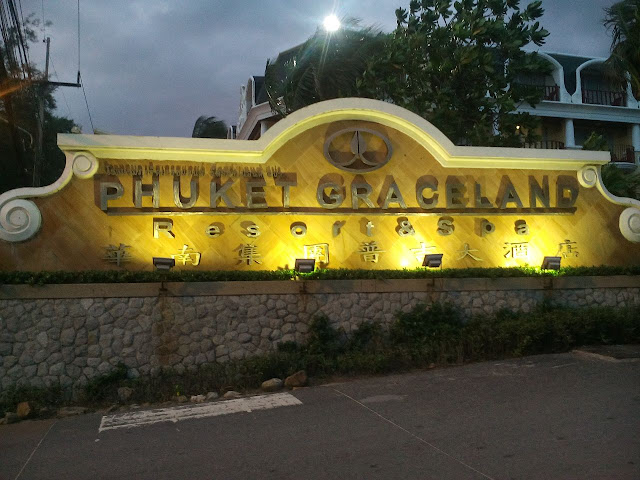 The resort itself was elegant and nice. Their gym was awesome!!! Their pools were awesome too!!! They couldn't fit all the committees in this resort so some of the committees, including us, stayed at Kalim Resort, Graceland's sister resort. It was about 2km from Patong, considered outskirt of the happening places. yet the room was huuuuuge! I think we can easily fit 6 people in one room. 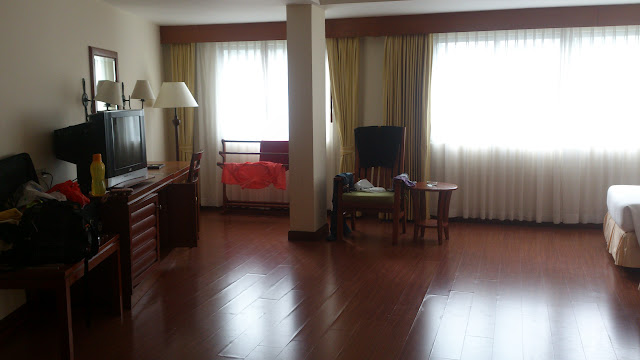 P/S: from now onwards, time stated is +7 GMT and currency stated is Baht (B).

We arrived at 10pm local time, and we were too tired to walk far so we settled our dinner, adventurously, at an outdoor roadside beachside sit-on-a-floor-mat steamboat! LOL 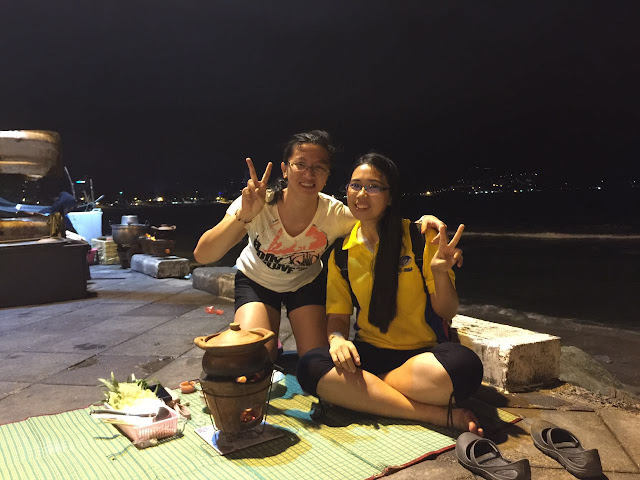 As we walked out from the resort, we saw several local Thais sitting by the roadside and eating what seems to be steamboat! Out of curiosity, and we both agreed to test our iron stomach, we decided that's what we're gonna have for dinner! 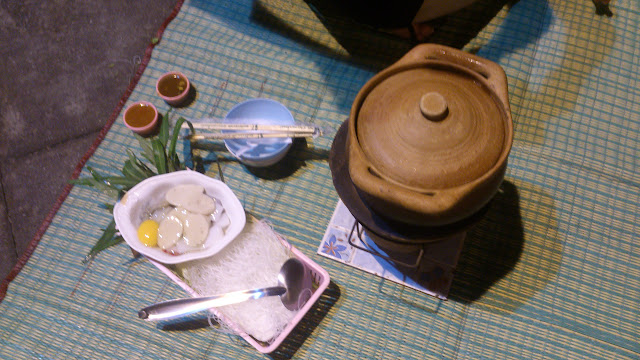 The menu was pretty simple. 200B per pot/set, three choices - beef, seafood, chicken. The setup was simple too, just a floor mat and a brick/tiles to put the clay stove things. There's strong wind that night, so the fire was furious! It was quite creepy/dirty as I saw few mouses running around, FY was facing the other way so she didn't see them, and she shouted at me not to look! Haha!

The locals were chatting and drinking and having the time of their life, one of them even put on songs in their car and enjoyed the food! Nice experience~ Thank goodness, after the meal, none of us got diarrhea. Iron stomach checked!

The conference was A-OK. Get to know few undergrad and postgrad students, most of them freaking nervous! Ah, the conference newbies. I was all old-bird telling them to "Relax!! It's just a conference!" LOL.

The first day was spent in the conference venue for the first session and opening ceremony.

Had lunch at a shop selling pork and chicken rice. FY got to flaunt her limited Thai hehe. 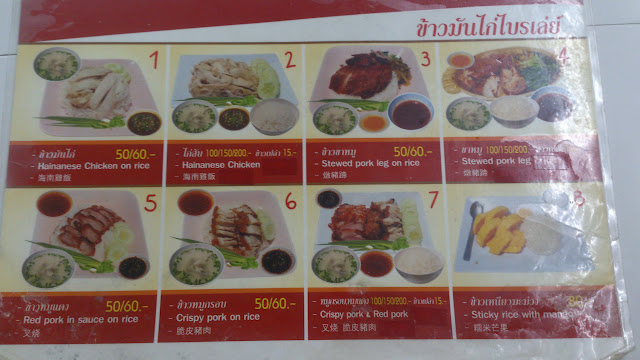 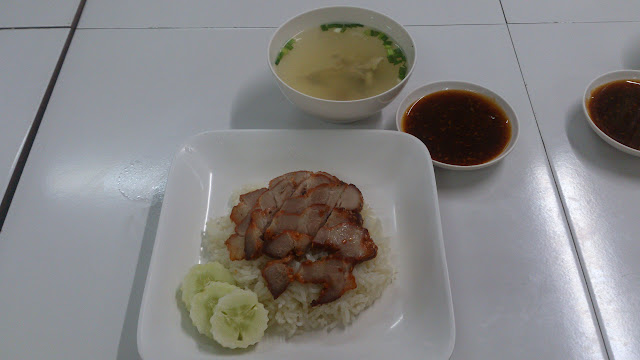 Later in the evening, I ditched FY (coz she had committee's duty to do) and befriended Joanne, a soon-to-graduate undergrad, and brought her around Patong town the way I knew it from two years ago. Had a second round of Patong town walk with FY after her duty.

We didn't get to cover much coz of the limited time we were there, and I have to keep reassuring them - NO! Patong does not represent the whole of Phuket! Please come back again and explore other places in Phuket! Pleaseeee.

Yeah you can say I love Thailand very much LOL. I wish I can speak Thai.

Even when FY's colleagues talked about the infamous Bangla Road and how it 'pretty much sums up what Phuket is like', I went on the defensive mode again. I kept pointing at the Phuket map and said "See? This is the only part you've covered... There's so much more to see out there!!"

I thought this would be another uneventful conference although it's my first overseas conference, and then 'things' happened.

After my session, FY and I went for a last minute walk/shopping before her flight, and we stumbled across a barricaded road. 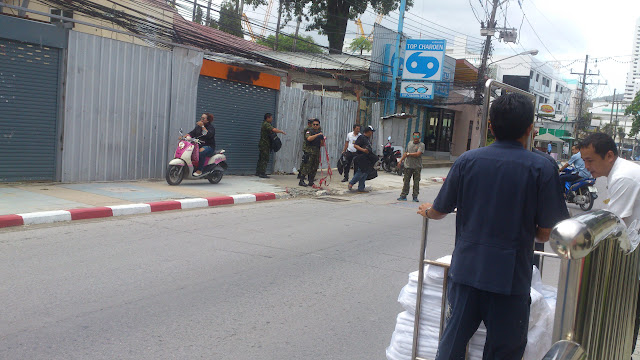 It was right next to Impiana Resort, and it's not really barricaded, just a few guys in army uniform and bullet-proof vest (GASP!) standing in the middle of the road and closed the road with a no-entry red ribbon. No one was there to stop us from continuing but we got scared so we hide at the side lol.

Worried but curious, I asked the Impiana staff (the guy in the white shirt on the right) why did they close the road. The staff was like "Bomb! In front!" 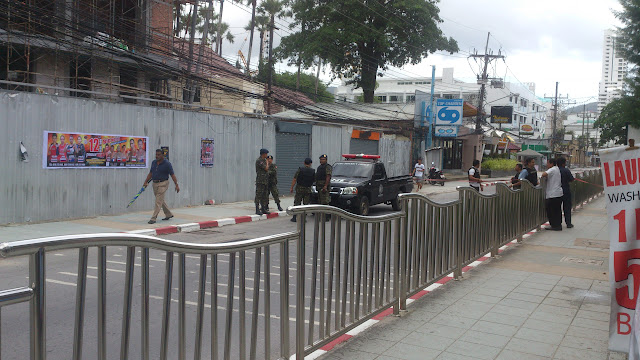 But, of course, if you don't know me, I am a daredevil, sorta. Instead of quickly running away, we both stand inside a closed cafe and took pictures. Haha. The aunty who owns the touring shop where we stand hurriedly pack her stuff and 'close shop'. We asked her again what happened, and her info was very frightening: "Suspected 80 bombs around Surat Thani, and 12 around Phuket". Yikes! As it was also the Queen's Birthday that day (equivalent to Thailand Mothers' Day - a big deal in Thailand), there was a celebration/function going on by the beach, and the aunty asked us to stay away since it's one of the suspected bombing hotspot.

I quickly updated the news to my family and Hon. FY was frustrated as her transport to the airport was brought forward - she couldn't see the action and had to rush to airport before lunch. Sigh. She kept asking me to keep her posted "If you think you wanna walk around after this. I kinda knew you wanna" Can you not know me so well? Haha!


Despite being alone and all, I decided to walk around town 'just to see'. Surprisingly, 3-4 hours after the road closed incident, Patong town seems to be alive and kicking! Tourists and people filling the roads, shops, malls, everywhere. I walked to the closed road and it didn't even show any signs of a dangerous situation just few hours before.

As I said earlier, the Queen's Birthday was a really big deal in Thailand. All the Thai channels were showing the same thing - prayers and gift giving to the monks and speeches and song singing and fireworks and everything! For several hours! All the Thai embassy around the world was also celebrating.

Since I was all alone the last night, I got a simple microwaved dinner from Family Mart. Sound so sad ya? Hehe. Got to watch 'The Godfather' incompletely.

Phuket must be sad to see me leaving coz it rained heavily since midnight until our departure time at 7am! Another exhausting 12 hours bus ride back.

That's it! Nothing much, nothing too fun - except the bomb threat incident. Thank goodness FY was such an awesome and wonderful travelling companion! The eating part was the best coz we both are quite adventurous when it comes to food haha!

I think I'll be back again Phuket. Or, the least I can do is say good things about you. =)

And, seriously, don't judge Phuket based on Patong. As much as I like Phuket, Patong is the very last thing I would recommend - unless you like to party.

Hmmmm.... Can someone name me as 'Phuket ambassador'? :p
trip