September 12, 2018
Phew~ Now that I've finished all my thesis shenanigans and ready to submit for viva, let's get started with the overdue blog posts!! 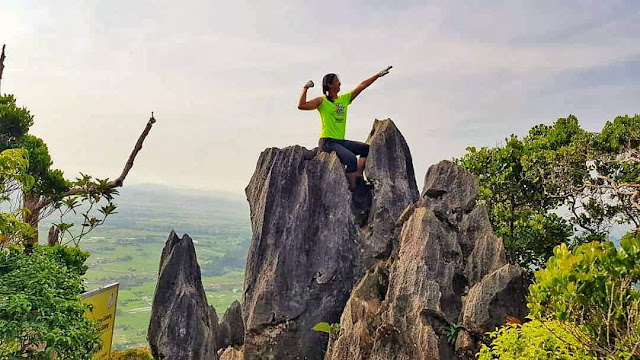 Verdict: One of the toughest hikes I've been to, and I haven't been to that many hikes LOL. It is tough and challenging but doable, the view is definitely to die for. I would really LOVE to visit again.

A little info about Wang Gunung: It is located at Sungai Batu Pahat, for those who familiar, its entrance is nearby the Taman Ular the golf club area. A permit is necessary, do take note of that. The permit can be obtained at Perlis Forestry Department for RM5/person. The hike actually criss and cross on the Malaysia-Thailand border, which is very interesting to me. It is considered challenging and tough, some trails require very steep climb with rope (not technical), so glove and a pair of good gripping shoes are highly recommended. More info from here.

The hike was in July. It was supposed to be a co-joint hike with another group coming from KL. Hairil was one of the guide and he was the one who asked us to join this group. There was another friend to join along but she had to cancel last minute.

The itinerary stated the hike started at 4am and gathering time was at 3am!! It took me about 20 minutes to arrive the location, add in the preparation time etc, I literally slept at 9pm and woke up at 1.30am -_- When I woke up, my housemate hadn't sleep yet, so she asked if I hadn't sleep or just about to sleep LOL. She was very surprised when I told her I'm going for a hike AT THIS TIME, then asked me to check out the eclipse. What eclipse?

Sorry, that was as far as my phone, TP-Link Neffos X1, can do in taking moon picture -_- Apparently, this was the longest total lunar eclipse of the 21st century. Like WHAT!? Yeah, I am ignorant and obnoxious like that lol. I seriously didn't know anything about it until my housemate told me so, and when I arrived at the gathering point and the guys asked me to look up.

After waiting some time later, we were told the van those KL gang took broke down, and transportation problem etc causing them to be so late to depart from KL, so Hairil gathered 6 of us to ascend first at 4am.

The ascend was like the midnight ascend to the peak at Mount Kinabalu - in the dark. It was a good thing because we couldn't see anything except anything our headlight shine at, so we could only be able to concentrate on the hike and nothing else, aka couldn't see how steep the climb or how narrow the trail etc. Come daylight and OMG this was where we hiked up?!

No much pictures ascending and descending because I was too busy climbing. I was with the two hiking pioneers in Perlis (Hairil and Abang Razak) who were the ones responsible in routing the trail!! Thank you!

I made the wrong decision to wear a 3/4 pants, it was loose (I had to stop and pull the pants up so many freaking time) and I couldn't tugged in the pants into socks to prevent leeches. It was raining for few days (luckily it was dry the day of the hike) so the trek was a little muddy and slippery. Due to the humid, it was leech party aka Pesta Pacat, leeches everywhere!!! Abang Razak handed a miracle water, a lemongrass solution thingy that can knock off the pacat, and it partially worked. I had at least 6 leeches bites around my foot and ankle of both legs, and one actually got up to my butt cheek!

Not long after the walk from entrance, we were asked to put on our gloves as it was hiking with the help of rope time! OMG it was really slippery, you have to watch out not to stay too close to the one in front of you to prevent their slip foot hitting you in the face!! YES it is THAT steep!! I think all those leg days do help out as I learn how to use my legs properly and effectively for the hike. At some part of the hike, we actually walked on the Thailand side. That was pretty cool if you ask me.

We reached the summit at 6.30am and the sun was starting to come out.

While enjoying the view, the KL group caught up and managed to reach the summit as well.

According to them (me eavesdropping), they were a group of coworkers working at a hospital in Klang (I didn't get the name), consisting of doctors, nurses, etc, and their plan was to depart from Klang at 4-5pm. Unfortunately, their van broke down in Perak (I think?) and they waited for the contingency plan, departing again at about 12am!! They arrived at about 5am and immediately started the ascend! A million dollar question was asked:"If you all come, does it mean the hospital is closed for the weekend? Or you have other staffs in the hospital?" The question went unanswered (or they did but I didn't hear). 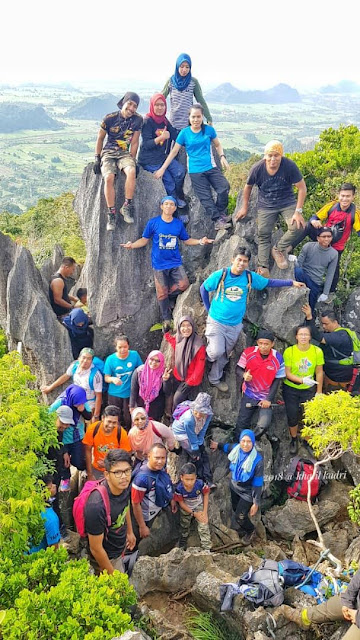 Honestly, I don't think the pictures do any justice though. The view is so beautiful and magnificient, the sound of nature is very soothing, it is really great!!

The group descended first as we waited for them to clear the area for pictures lol. Hairil said I'm very good in the hike so we can definitely catch up. 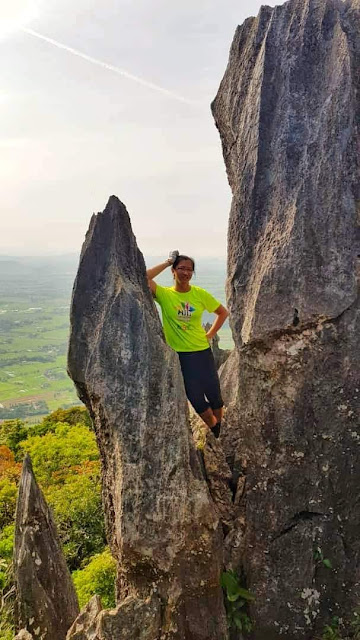 The challenging part about the descend was that, I get to see the trek I came up from. OMG it was so steep!! Still, no pictures coz I was too busy going down.

At the last part of the climb, one of the lady sprained her ankle hence she couldn't use her legs strength properly. As there were all guys and I was the only woman besides her, I volunteered to become her human tongkat aka climbing stick. I didn't know how else to assist but to stand in front of her and ask her to throw her weight on me when descending. At first, she was very cautious as she didn't want to burden me. But after few slips and falls, she did throw herself at me hehe. OK lah I'm glad to help, thanks to my very strong legs! :p

At the end of the hike, I was tired, no any single muscle straining but tired because of the early wake and all lol. Seriousl
hiking