October 15, 2008
Day by day, my list of presentations and assignments are reducing one by one. Yippie! BUT that indicates how near the final is, day by day -_-

I went to KL last weekend, to unbreak my previous promise, plus in conjuction of my birthday too.

So ngam Rais rode the same bus with me, but I sat at the single seat. Beside him is an auntie with a baby, along the journey I saw him helped the auntie to hold the baby timelessly, so cute! ^^

Friday night we had our dinner at Wong Kok Char Chan Teng. I ordered a delicious spagetti 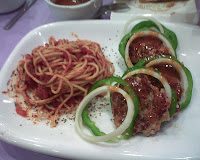 and a not so nice 'snowy chocolate blueberry' 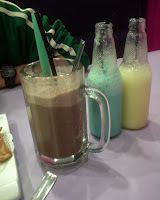 The green and yellow drink were pakcik LCC's. 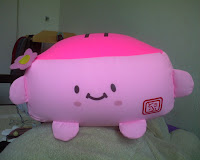 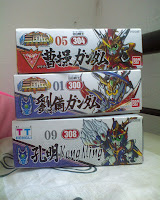 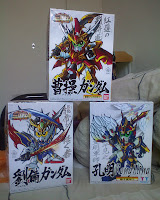 I already finished constructing Liu Bei. The story will be up next.

We went to sing K at Neway BTS with Lim Tino on Saturday. Lim Tino, LCC gege gong ni jin jia yao yeng. We sang for about 3 hours++, very memuaskan, BUT there's one part which is NOT memuaskan: They give us two mic, one was partially broke. Cheh~

After that we went to Genting with AhYen, Vin Ann and AhHo. AhHo planned to go on afternoon, to have fun at outdoor first, too bad he asked the wrong person about this. He brought with him Heroes season3, Prison Break season4 and some TVB dramas with him, too bad my external HDD was at Kg. Wai. Aiks... We main-main-ing snow at SnowWorld for an hour, then yam cha at Starbucks until late night, and then back home.

My movie at this weekend was 'Eagle Eye'.

I read the posts in lyn, most of them are not very enjoying it and giving it bad rates neh. Maybe it just me or my taste, I think the movie is good! In this movie, Shia Labeouf seems so 'grown man' style neh, with his 不修边幅 look =) The story's climax is never coming down too, kepp going on and on and on, even though the story line is almost predictable as it will be, but I still love it. I am the 'will forward to the back to agak-agak see what's the ending and resume back to where I've stop' kind of person -_- But the ending is really not memuaskan lar. Sigh. And the cinema that we went is seriously not memuaskan too (IOI). I didn't complaint that much lah, but pakcik LCC mumbles alot about that. So this cinema can consider to be permaban from our cinema list until further notice.

It's like so unbelievable that this semester will finish so quickly. ^^ I'm gonna be so miss my dear lecturers and labs. I hear that! U call me poyo right!?

2. Coursemates messing around with the transparent umbrella after our 'grand dinner' meeting. 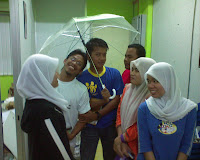