December 04, 2011
Balik-ed kampung last weekend since I haven't been home for quite some time (since Ah Kong's funeral on early Oct!! That is so 'long' time ago...). I mean, it was few long weekends but I wasn't be able to go back... 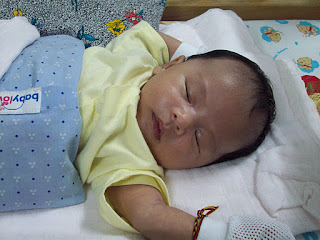 This is my dear little kai zai aka Godson, my deary friend Min Shin's son. He was born on 23rd Oct midnight. This little fellow is predicted to be quite some pain in his parents' a$$es because Min Shin suffered from labour pain for 4 DAYS just to wait for him to come out!! Anyway, according to the mother, the pain wasn't that suffering, it's the waiting part that frustrated both she and her hubby, as well as their families. 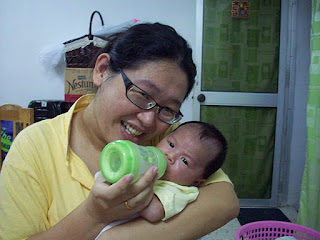 Promised a cross stitch pillow cover for little kai zai but I wasn't able to finish it on time (promised to deliver by his full moon). Break promise to a baby, I shall rot in hell I guess... I wasn't dare to carry him though, as I never carry such a young baby before. So I guess my first trial will go to my little new nephew/niece next year? Haha!!

The other time was just hanging around in the house doing nothing.

The hot story was this!!

I bought the bus ticket on Monday, Kgr-KB on Friday night and supposedly KB-Kgr on Monday night. For some reason, I didn't mention the date AND the day when I was buying the ticket, which I normally will, because if I get the date or day wrong, the counter person will scold me, or look me through her skeptical eyes. Sadly, I bought the ticket for Sunday night, and I never notice the mistake and still proudly carrying the ticket around, BY MY SIDE!!

Anyway, until the day when I supposedly to take the bus back to BoringLand, I boarded the bus, the driver did frozen for few seconds, checking, ticking, then off I went to my seat. By the time the bus arrived at Tanah Merah station (usually the last station to pick up passengers before heading to the East-West hilly highway), I was so sleepy, then this guy came up holding his ticket, walked to my seat and stunned for few seconds. I looked at him, he looked at me, and he said there might be some mistake at the counter, so he went down to check with the driver.

He got back up, and said the driver told him that night's bus was a full house, and it's nearly impossible the counter would have sell double tickets since they use online system. I was a little flustered, I took out the ticket, and said rather loudly:

"There must be some mistake. Mine is tonight's ticket, 27th, seat 3C."

When I said that, everyone around me turned their head around and looked at me, as if I'm some kind of an idiot.

That guy stunned for few more seconds, and slowly said:

"Ermm... Miss, I think YOU made a mistake. Today is 28th, not 27th..."
(He actually said it really slowly and softly, but I want to make a statement here, that I really looked like an idiot!!! Malunya...)

My eyes opened as large as they can be, and I quickly grab my phone to check, but the guy was fast, he showed me his phone with the right date on it.

I was TOTALLY speechless. I kept apologizing repeatedly, and worried about where should I sit since the driver said it's a full house. Luckily there's still a free seat next to me, so he settled there. The guy gentleman-ly looked for free seat for me, just in case... I said this supposedly to be the last station that the bus will stop, as the guy sitting in front of us agreed too, then this gentleman still wanna say things like this:"Ermm.. who knows maybe the driver stop by somewhere to pick people up?"

'Thanks' to his Ermm, I wasn't be able to sleep for the next two hours, quickly open my eyes in ultimate surprise when the bus slowed down worrying the driver was really picking up people along the way, until the bus finally leave the last town in Kelantan and sped off towards the uphill road only I could sleep worry-free.

For the past 10 years of taking long distance bus, this is the first freaking time I made such a careless and stupid mistake!! Oh my gosh...
home