No to the early rising though, that one sucked max -_-

I was first informed about this event on June. The initial date was on 2nd Nov and it was supposed to take place at Dataran Merdeka. There's a lower rate for group registration - RM70 instead of 75, so I joined Chen's group since no one in Perlis was interested that time.

Around October, an email from SCORE saying the event has got bigger and "better", they marked a new date on 18th Jan and shifted the venue to Stadium Merdeka. The word better always has to have the quotation mark on and di-Italic-kan, especially events as such when they make it "bigger". Even smaller events sometimes don't do well, let alone bigger ones. I just hoped it went OK-ish...

And, WOW, SCORE does not disappoint! In fact, it was an event with almost 6000 participants, and I did not have any complaint or rumbling or dissatisfaction at all!! Kudos!!

We arrived the venue at 7.15am by cab as they had a RM10 cash rebate for booking via MyTeksi App. Theresa was there as early as 6am woah!

Chen's friend helped 8 of us to collect the entry kit, nothing fancy I was a little disappointed. The SHAPE magazine is pretty interesting though.
You could see all the people in their greeny t-shirt with a big Z at the back walking towards the stadium. The flow was massive but on the move, so everything was really smooth. I think one of the reason was the entry packs were given a day before the event, so reduce one crowd control spot on the event day itself.

We were required to register again to get a number sticker, and as I said earlier, the crews were really good in crowd controlling, there's a clear line of where to queue, where to go in, no one pushing, no one shouting, everyone queued and waited for their turn patiently and nicely, it was all at peace~ 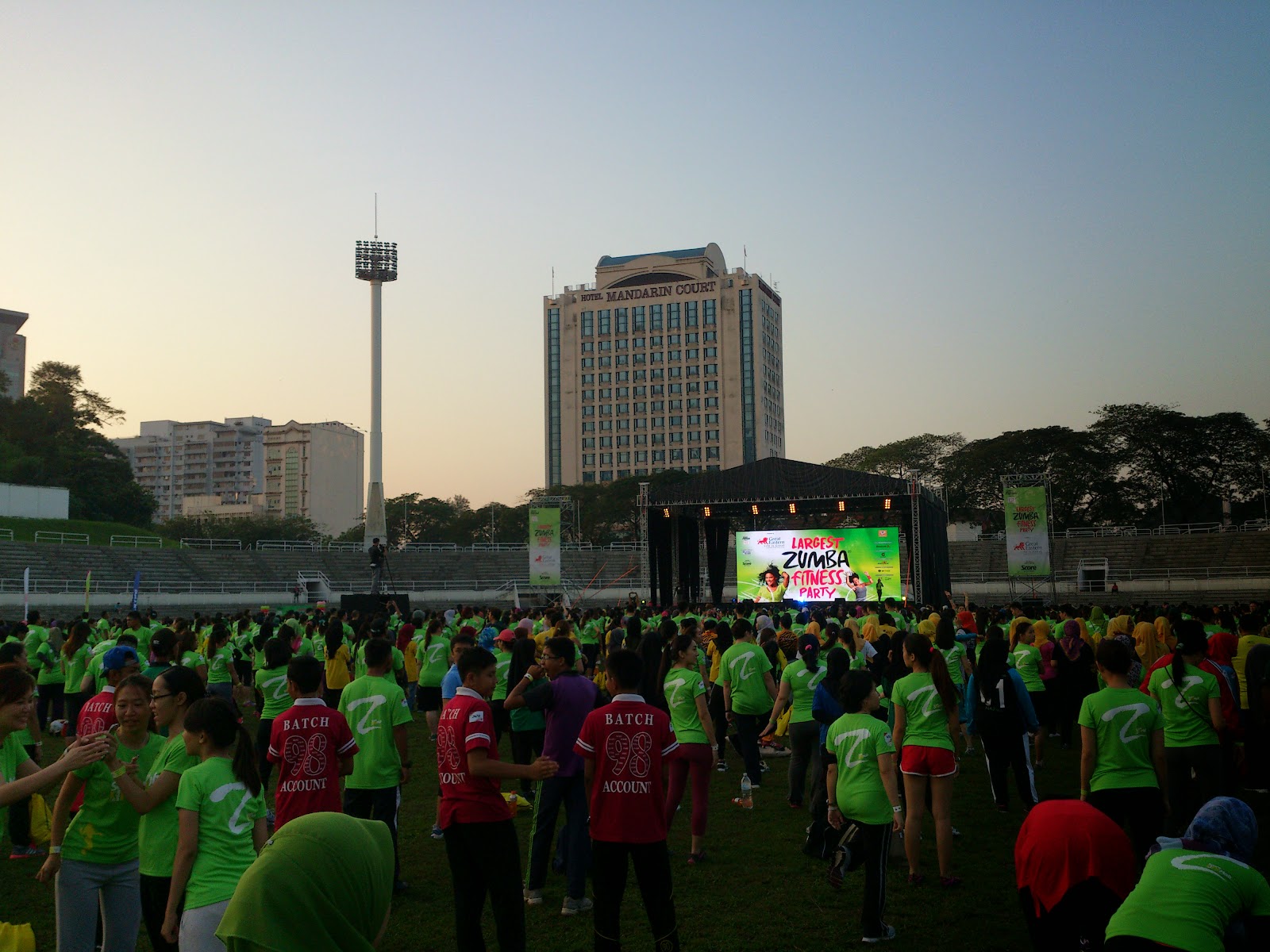 We stood behind all the crowd as it was the most vacant (at the time). Minutes later, people started to swamp into our zone and yikes so many many people around us!

Linora Low from MIX FM emceed the event, the stage was quite far and she was so tiny from our view I didn't pay much attention to her. Theresa, who was in the stadium very early and she stood very close to the stage, said that she kept the early risers entertained and she did a very good job. They showed the video of their previous events and the bodycombat one was so seducing!

The event started at 7.40am and ZUMBA BABY ZUMBA!! It's pretty fun(ny) watching all the people wiggling and wagging and twisting and turning while since there's no mirror (obviously) I also shiok sendiri indulged in the fun. The field was a little wet due to light rain the night before but luckily it didn't get into mushy mud, and it was soft ground it was good to our knees. The sun started to rise up and we started to get sunburn on one side of our face. I also get to see David, the instructor of instructors (he trains instructors), although he is just one tiny stick hopping and jumping on the stage.

I went to the toilet at some point and I tried to search for Theresa, and thankfully she spotted me! We chatted for a while and got back to our own spot.

One complaint though, the camera and video crews were not good enough. Us at the back depended heavily on the big screen as that's the only way we could see what were the instructors doing on the stage, but, nope, from time to time they just had to go around shooting the participants and whatnot, so we were left clueless of what to do until the camera focused back on the stage. I know it's part of their job but couldn't they do something about it like installing another screen maybe?

The even ended at 9.30am, and again, there was a properly organised queuing line formed up to collect medals.


Overall, it was satisfyingly fun! Kudos to SCORE job well done, excellent crowd control, excellent crews, excellent flow, in and out of event no problem!

Hon sent me to KLIA2 that evening. We detoured to Bukit Jugra for some sight-seeing.

Bukit Jugra is very famous of paragliding activities too. There was a lot of viewers (like us), and paragliders doing their stunt. 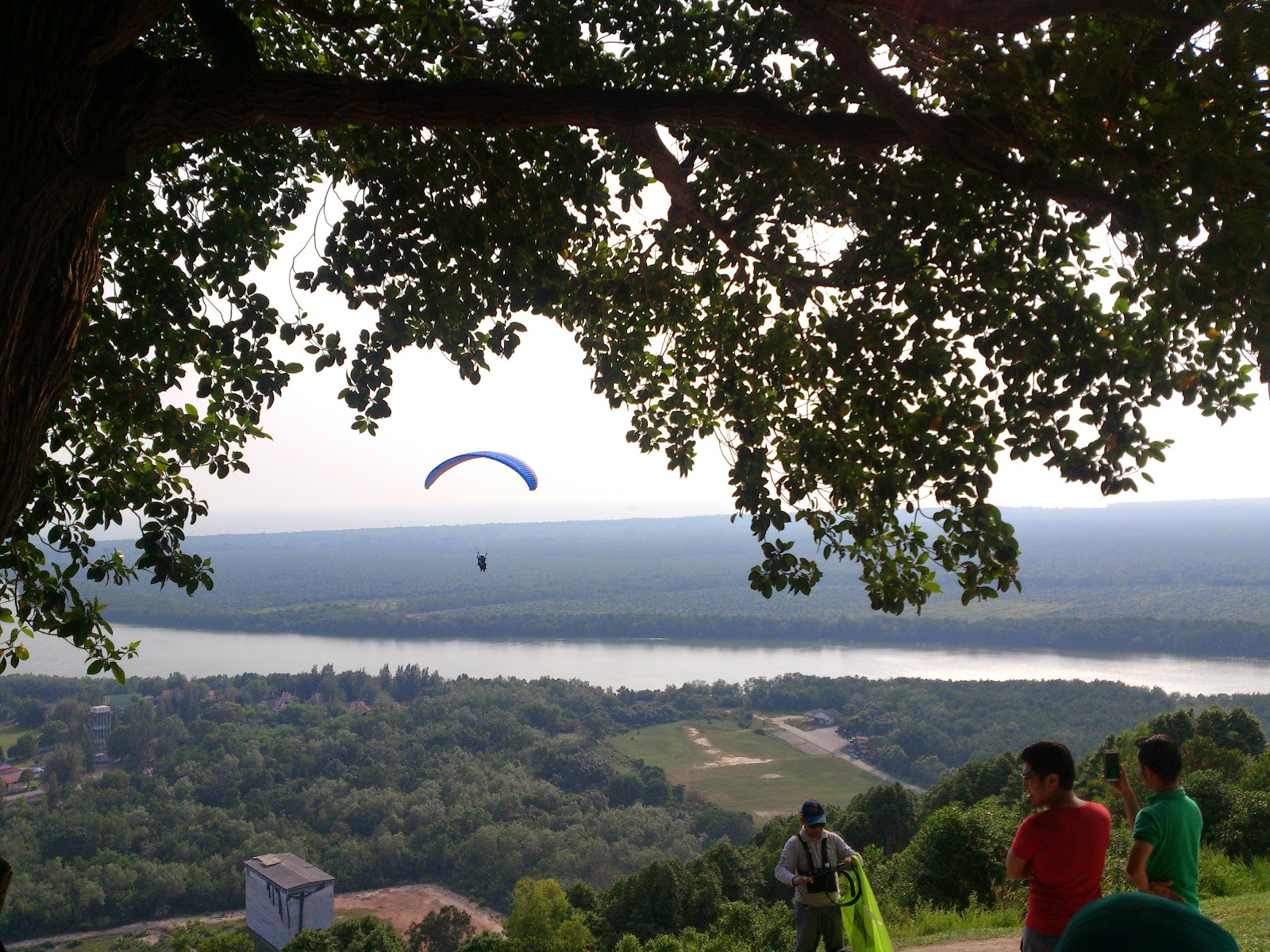 Hon chatted with one of the paragliders there. He told us about the ways to become a paraglider (meaning you fly and land on your own), the cost of equipment, the condition of paragliding etc etc. I can't remember most part of the conversation, but one thing I remember, the cost is RM150 per pax which I did not expect to be this cheap, and he said the wind on the day was perfect!! Too bad we had a plane to catch so we had to go sigh...

The weekend was over and I was down with flu and running nose after I got back. -_-
ZUMBA