January 17, 2016
Since I wrote about Shirlyn, it's only fair to write about my new niece Zhi Xuan too.

Haha maybe I'm the only one to think that LOL!

16th Nov 2015, eeearly morning about 6 something, I woke up, turned on my phone and I saw several WhatsApp messages from our sisters group, At 5.30am Chen said she felt the pain and going to the hospital, then I slept back.

Woke up again at 8am and she said she's still waiting for the doctor and to be admitted. Several messages going around like she's been admitted, delivery room still occupied, this and that.

I got up, morning bath and getting ready routine, got out of the house, had breakfast and by the time I reached lab at 10.30am, message came in said she's delivered!

I've heard about people go into labor for hours and some even days, I expected the news to come at least on the noon or something, but that was FAST! Quickly demand for pictures!! 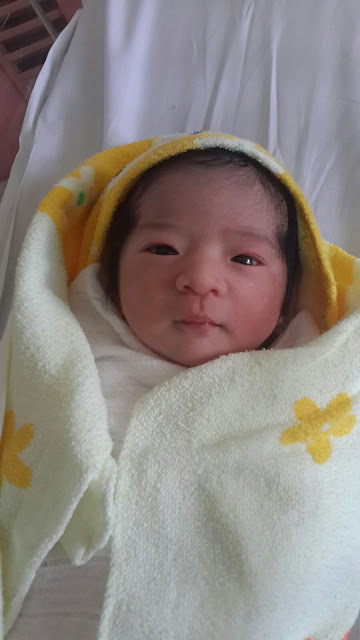 When I told Hon about it, Hon was all with his snide remarks saying "all babies are cute ah~ What makes her so special~"

Hey Mr that is my niece OK She's the cutest baby in the universe lah!!

Speaking of which, I have a funny remark regarding her gender.
My bro in law, Keong, comes from a family of 4 boys, then the boys who have kids also all have boys, so the assumption is that the XY gene (the correct term should be chromosone) is very strong in his family.
Our family, on the other hand, has 4 girls and the only grandchild so far (then) is also a girl, so our family has a formidable XX girls-power gene force.
When they found out about the baby's gender, I was all excited saying to everyone "Our family's XX gene is the strongest force of all muahahaha!!!"

On her first month, she was 'yellow-ish' with jaundice that made us a little freaked out. Luckily she wasn't too serious to be admitted.

Since I'd be in KL for the PECIPTA exhibition early Dec, I only able to visit her 2 weeks later. 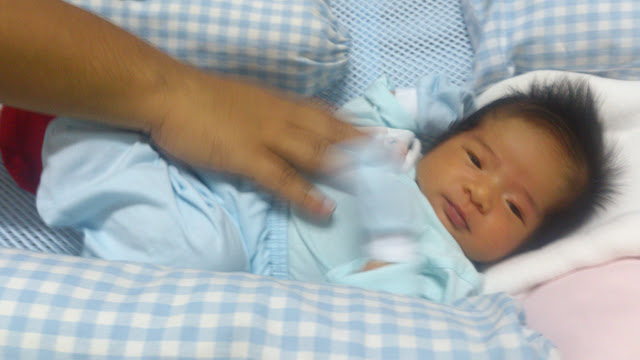 Too bad that time I was down with fever, running nose and diarrhea, plus menses, it was like all hell break loose yikes! So I could only look at her from afar and touched her a little =(

After the exhibition, I stayed for a week until her full moon, the day she's going bald muahaha!

After confinement, mom took charge of taking care of the baby and Chen (Chen's MIL took up the confinement duty). When we were all in KL, we would send mom over from Chen's place in Jalan Gombak to Keong's place in Batu Caves, and as a daredevil woman as she is, knowing that we would eventually not be around all the time, she started to memorize the route so she could drive herself there instead.

On her first (driving) attempt, she missed the exit and going towards MRR2!! I heard the tales from both Chen and mom later, it was full of adventure and everything wow!! 2 hours later, she figured out the way to Keong's place (by asking people for direction) all by herself!!!

62 year-old aunty, without GPS, without smartphone without anything, managed to survive KL road and, most importantly, NOT FREAKING OUT AT ALL AND WANT TO DRIVE AGAIN!

Now you know where I get those bold blood from~~

On the weekends, Chen would bring B Xuan to Diamond (her place)

Most of the time, we would hang out at Batu Caves.

She gets a whole lot of nutrients from her mom's breast milk, she gains so much weight!

I guess this is how it's like to have a new baby in the house haha, all hype up!
baby family