Chen (my sister and the mother of the new niece) asked my mom to help in her confinement month, to cook, to do laundry and what not. Her MIL helped during her first born but she couldn't make it for this one so my mom is up. Since I was in the middle of correcting my thesis, I promised to go along as assistant when my correction was done.

Her expected due was supposed to be on the end of Feb, which was few weeks after CNY. Everyone already planned their things. I too already planned my things.
Finished correction in two weeks - go to KL.

However, thing took an unexpected turn.

On the 19th 7am, Chen messaged on our group chat saying her tummy hurts and she will go to the hospital after drop off her first kid Xuan at nanny. Two weeks early!!!

I told Sing (le new bf) about it and that I might have to go to KL two weeks earlier than anticipated, and he was like "then you have to finish the correction by this week loh if you wanna go this weekend. Can?"

Proven, desperate times call for desperate measures. The correction that I have procrastinated for 2 months, managed to finish it up by 4 days lol!!

Her delivery was super fast too this time (just like her first born). By 12pm we got the message that she has delivered!
In fact, Chen said it's actually faster than Xuan, 7.30-ish am she went in delivery room, by 8-ish am already delivered!! But because her phone was with her husband, and her husband went to send Xuan to nanny, she couldn't contact anyone. And also because her husband wasn't around, the nurses kept on calling him to attend to the wife to no avail lol.

My task was easy (and hard physically). I was there as chaffeur, babysitter, nanny, lifter, bodyguard, runner, mail girl and also bin for the food mom cooked. The three of us actually ate 10 whole chicken in 14 days! It was hard during the time but it's such a great memory.

Yao is such an easy baby to take care of!! For the carer lah, not the mom. She doesn't cry much, she can play by herself, she sleeps and naps a lot! As for the mother though, unlike her sister, Yao didn't drink much, so Chen had quite serious fever at one point due to breast engorgement and she skipped pumping the night before. Yikes! Chen said Xuan would just direct latch all the while so she didn't have to pump so much, but this Yao was the opposite. 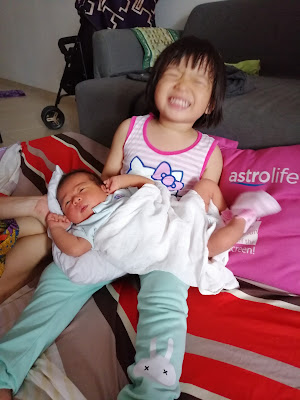 As for the big sister, *sigh* I wish she doesn't crush her baby sister. Chen gave all kinds of "new baby is coming" pep talk to her and she seemed ok-ish, but when the baby came along, all hell break loose -_-

During the confinement month, she stayed at her nanny's place and we took her home on weekends. The jealous of divided love was undeniable, but she hopes to get 120% of our love TO her even when the full attention is on her. Hmmm.. So many times she would just free fall onto the baby!! So, whenever she's at home, we played and played and went swimming to divert her energy. 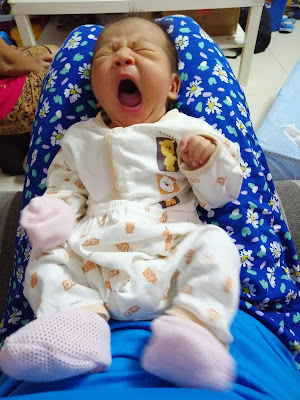 After the confinement, I came back with very heat-y body! Mom cooked a separate dishes for her and I besides Chen's confinement food and it's still so heaty! My period postponed for the whole month yikes! I can feel myself burning from the inside lol. It took me about a week to start feeling the heat drain away. At six months old, she starts interacting with people, and she interacts A LOT!!! Such a cheeky baby!! Her sister was a very cool toddler, hardly smile and it took the whole circus act just to get her giggle ONCE -_- Yao is the direct opposite. She smiles the minute you make eye contact, and giggled and laughed a little when you tease her! So sweet I gonna die!!!
baby family