Last Friday, I went to the hospital with Lee Jynn to donate blood. It was her first time and she was sooooooo nervous.

You know the drill if you ever been to a blood donation. After filling up the form, "check point 1" step up the weighing scale, get a pinch on your finger to obtain few drops of blood to "check point 2" check hemoglobin level and blood type (wonder why are they still doing that although the blood type is clearly stated on my donation book!), then you are asked to meet with the doctor-on-duty for Q&A and blood pressure checking session.


Jynn took some time in the doctor's room, and when she came out (she passed!), she said maybe because it's her first time, the doctor asked her about the AIDS/HIV questions like how is it transmitted. It's quite a shocker as I never had that question asked except 'do you understand what does this section of questions mean? OK you are clear.'

Then it was my turn.

The doctor spoke very softly, I had to 'HUH' at every sentence and he had to repeat at least twice of whatever he was saying. Then, TADA, I was asked the exact same question Jynn kena. Yikes I donno lah doc I hentam saja, stole the answer from Jynn muahaha.

Then the usual questions like do you feel well today, do you have a fever or sick for the past few days, do you have any medication blah blah. Although it's been two weeks, I think I was obliged to confess about the Kayap, so I told him about 'Shingles' and the antiviral med I took. He was wide-eyed when he heard me say 'I had Shingles few weeks ago', and he went 'are you sure are you sure!? Are you really sure it's shingles?? It's very rare and hard to get shingles you know??'
He was so surprised and concerned, I was shocked!
Then I said 'actually I'm not sure what's the English term for it, but Malay says it's Kayap, do you know about that?' He shook his head, went into deep thought, and stood up to ask the nurses to be clear! I was like 'CRAP! So teruk kah?? Takkan the virus is in my blood now I cannot donate forever!??'
He got answer, came back, and explained. Apparently, his explanation is exactly the same as I quoted in my first post about this shingles thing. You get chickenpox, your immune system defeat the virus, you win heal, the virus is in your system, it would come back when your immune system is low. However, according to him lah, shingles usually occur on the waist, and spread horizontally or in stripes, and very rare it would happen, so in my case (a tiny small tipsy bitsy on the shoulder), might not be shingles, maybe something else.

'No.... Have to check your blood pressure first'

This doc really make me che kia, scared the crap out of me!

I've learned so much from this illness lah~

Extra fact:
I am often repelled by those who is qualified as a blood donor and healthy as a bull, but always comes up with all sorts of excuses to reason their refusal to donate blood (just say you don't want to lah aiyoh!). So, now, I'm gonna provide you another strong excuse for not donating blood. Because.... 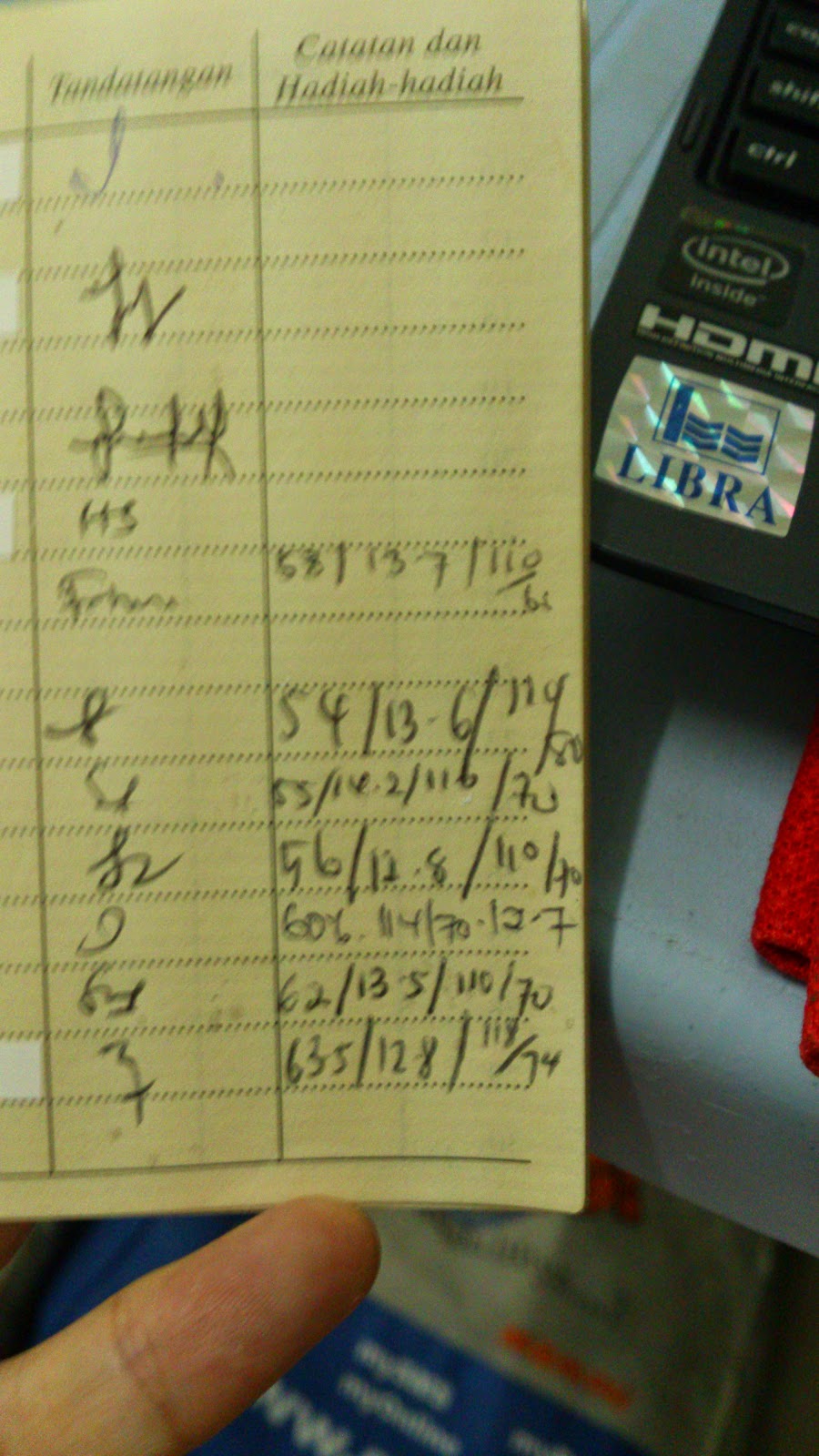 Blood donation may cause WEIGHT GAIN!!

I am getting fatter/heavier these days, but don't freaking care as long as my abs and muscle lines 马甲线 still there! Muahahaha!

Anyway, the weight, hemoglobin level and blood pressure reading was first recorded 3 years ago when the doctor allowed me to donate although my BP was 110/60, too low for blood donation. His reason of jotting down the info was to 'confirm' my low BP is a norm for me and it wouldn't affect me after blood donation.
(Your BP will decrease after you donate blood, so if you have a low BP, it would decrease further more and it can be dangerous)
So he suggested me to ask the doctor or nurses to jot down these information the next time I donate, as a form of keep tracking. As you can see, the weight has gained time after time, the BP maintains at almost same level, and hemoglobin level fluctuates (easy to manipulate hehe).
illness