The packed we booked was under a company called Raya Princess Tour. The price was originally 2,200B and there's a 50% - 70% discount during low season, so I highly recommended visiting the Thailand islands during low seasons! Everything (except food) is so cheap!

The minivan picked us up from the hotel at 8.00am, and we were brought to a 'gathering point' at Chalong Bay. Coffee and tea were free! Each of us were given colored sticker for grouping purposes. We were in orange team. Soon the tour guides arrived, called out the sticker color, and we were led by the guide to the pier. Our guide of the day is Pi (or Bi). 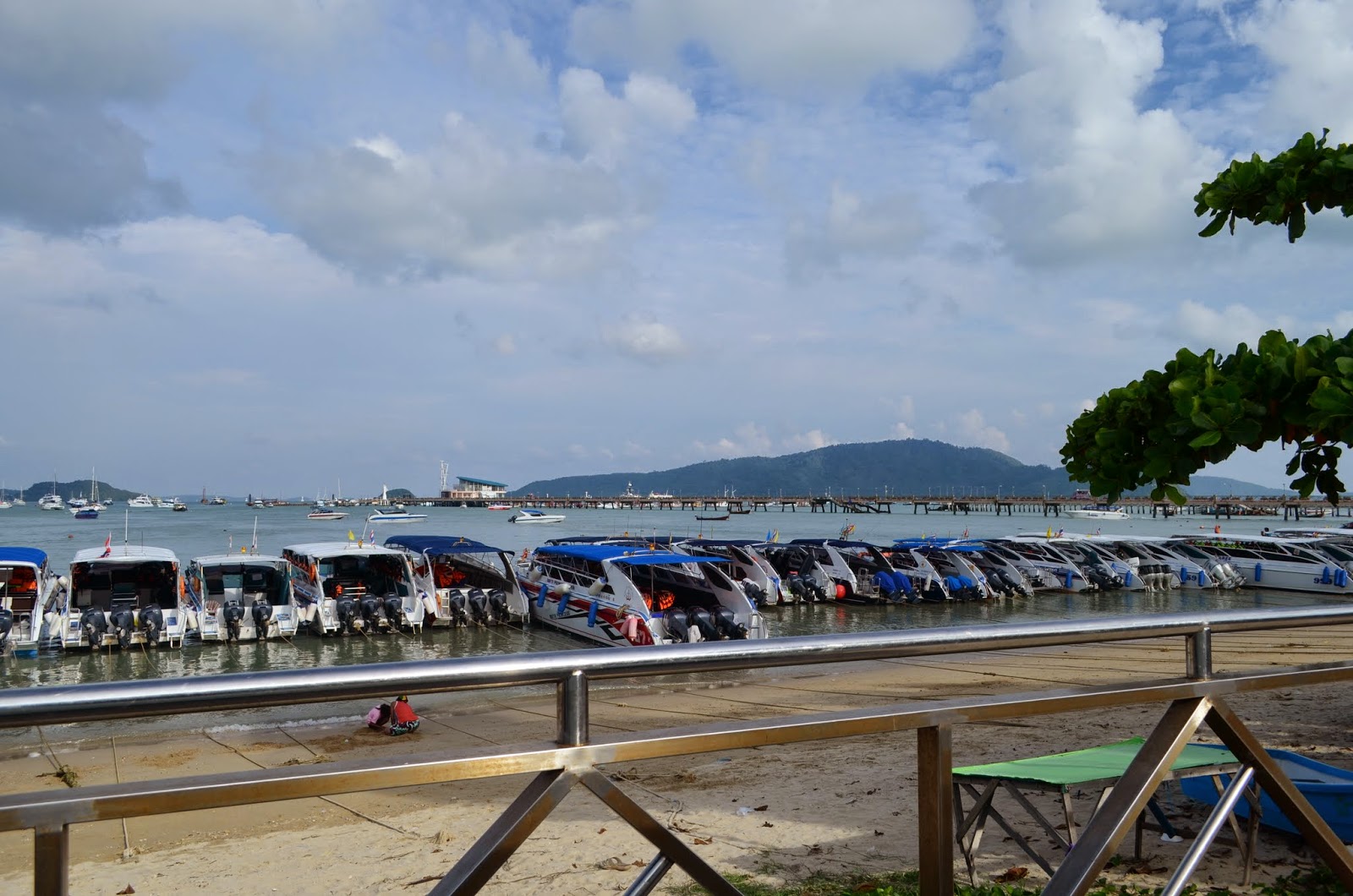 Same as in Koh Lipe, had to walk through the sea to board the boat. Before play water leg already wet.

The first stop was Coral Island, 10min from the pier. 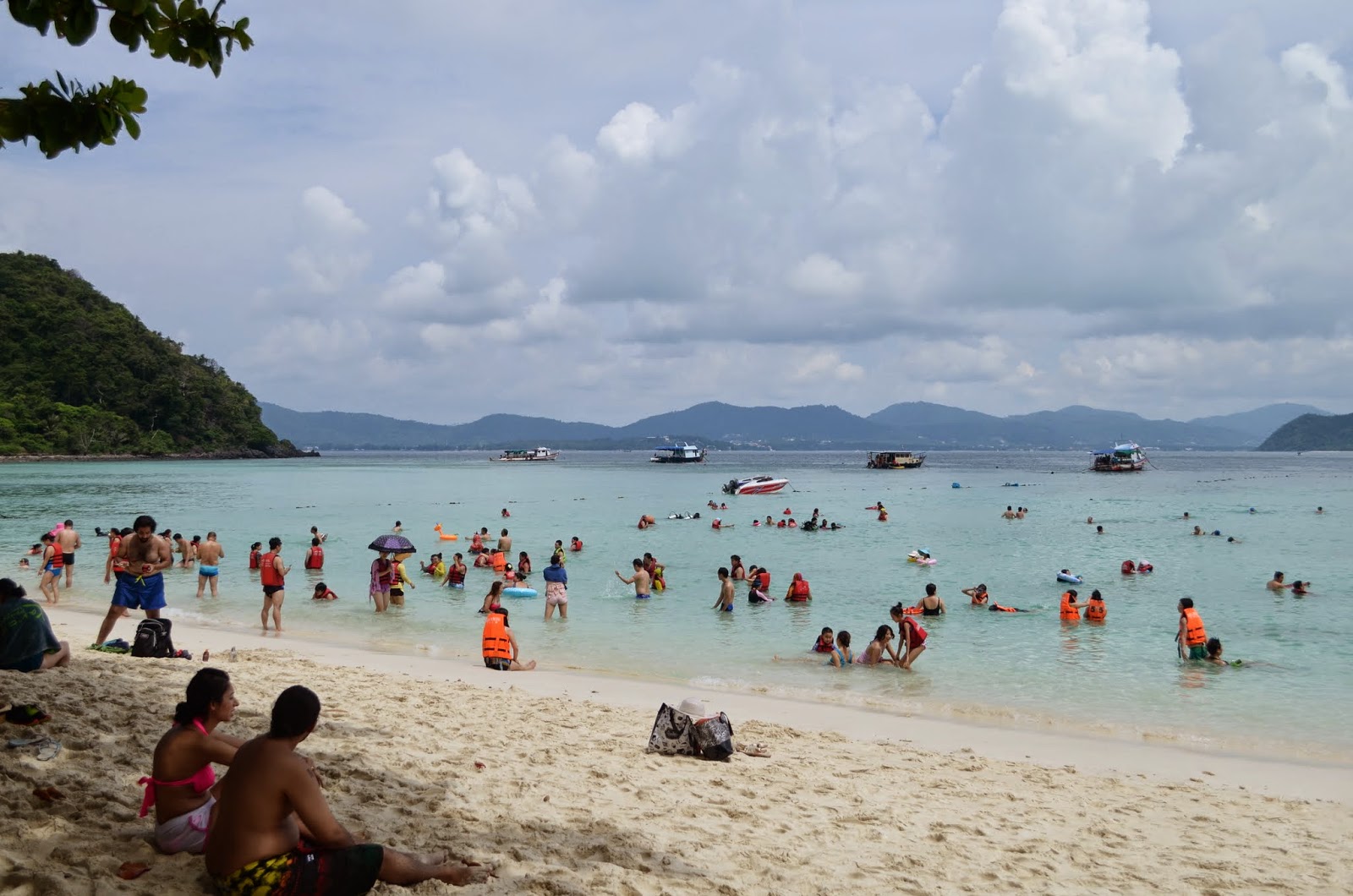 The activities here were mainly water sports (with additional charges) like 45min scuba diving, banana boat, boat driving etc. No snorkeling activities though, but the beach is shallow and wave is very gentle, so we just walked around, eyeing bikini babes and beach pants/swim trunks lads.

We had a 'fluorescent tube' dude in the orange group, meaning someone who wears fluorescent color outfit, be it top, bottom or both. Anyway, this guy was wearing a hot pink see-through jacket when we saw him at the 'gathering point', and then at the beach, he revealed that he wore a fluorescent green swim trunk!!! Triangle shape summore!! Who wears triangle swim trunk to beach!! I mean for guys! Beach pants is enough to be hot LOL.

The beach chairs were also not free, it's for rental at 100B. We made a smart move kononnya by buying a drink from the restaurant on the island so we could sit there without feeling guilty lol. We also played arm wrestling that attracted the tour guides' attention muahaha!

The second stop was Raya/Racha Island, about 20min away from Coral Island. When the boat approached the island's pier, Pi shouted (coz we were a large group) whoever is not interested in snorkeling can head to the beach as the snorkeling took place in another beach.

After those not interested got off the boat (summore had to turn back to fetch some fan shu coz they didn't want to listen properly and kiasuly hopped off the boat), we were brought to another side of the sea for snorkeling. Some jumped off without life jacket and did mermaid and merman stunts. The ocean view was nice and deep enough that we could not step on the coral rocks.

30min later, we were brought back to the island for lunch. Lunch was buffet style but 2 fried chicken per pax, kiam siap! However, the restaurant has clear water at the toilet so we had our shower there yippie!!

After lunch, we hang out by the beach, taking pictures and stuff... 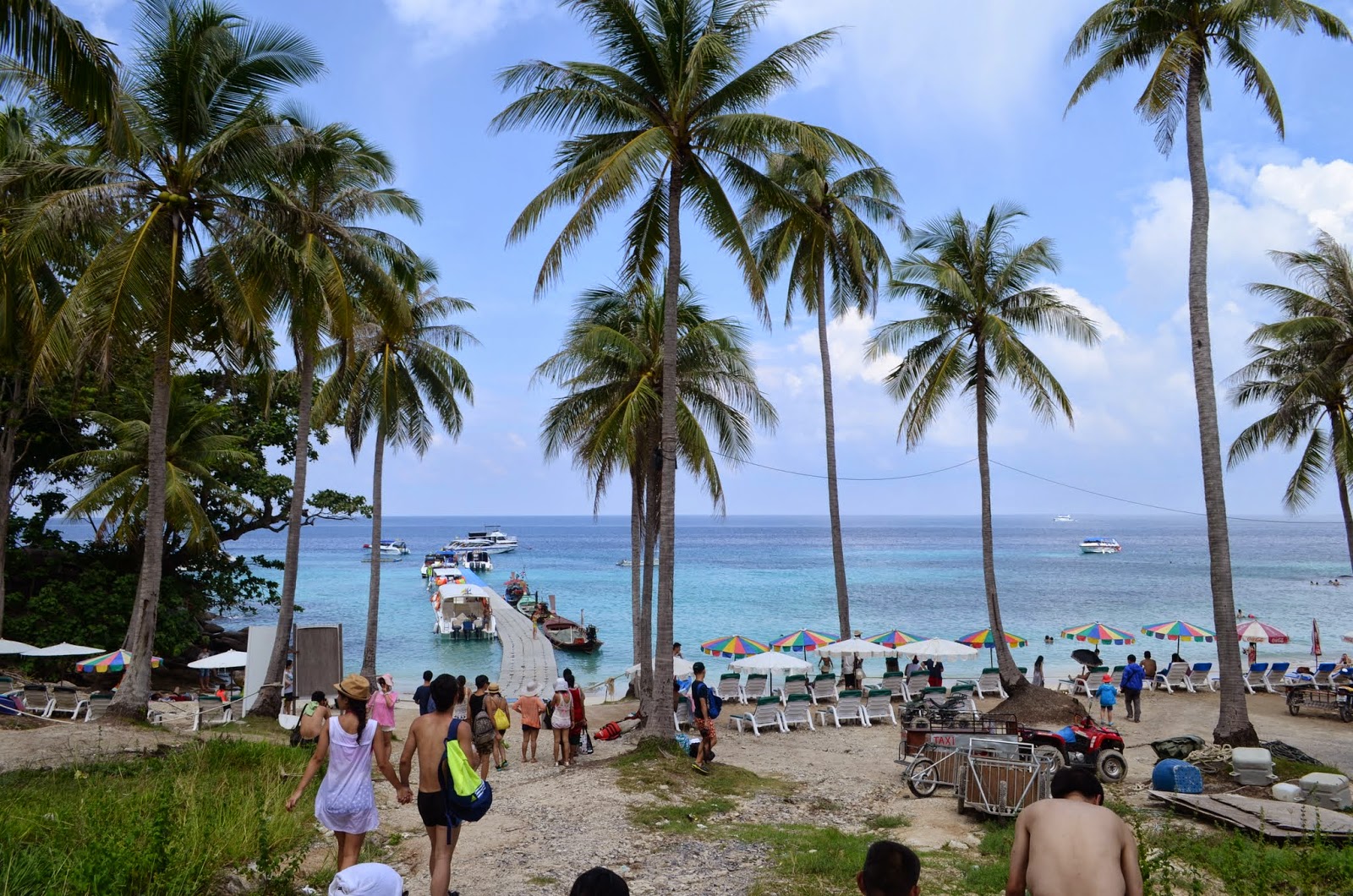 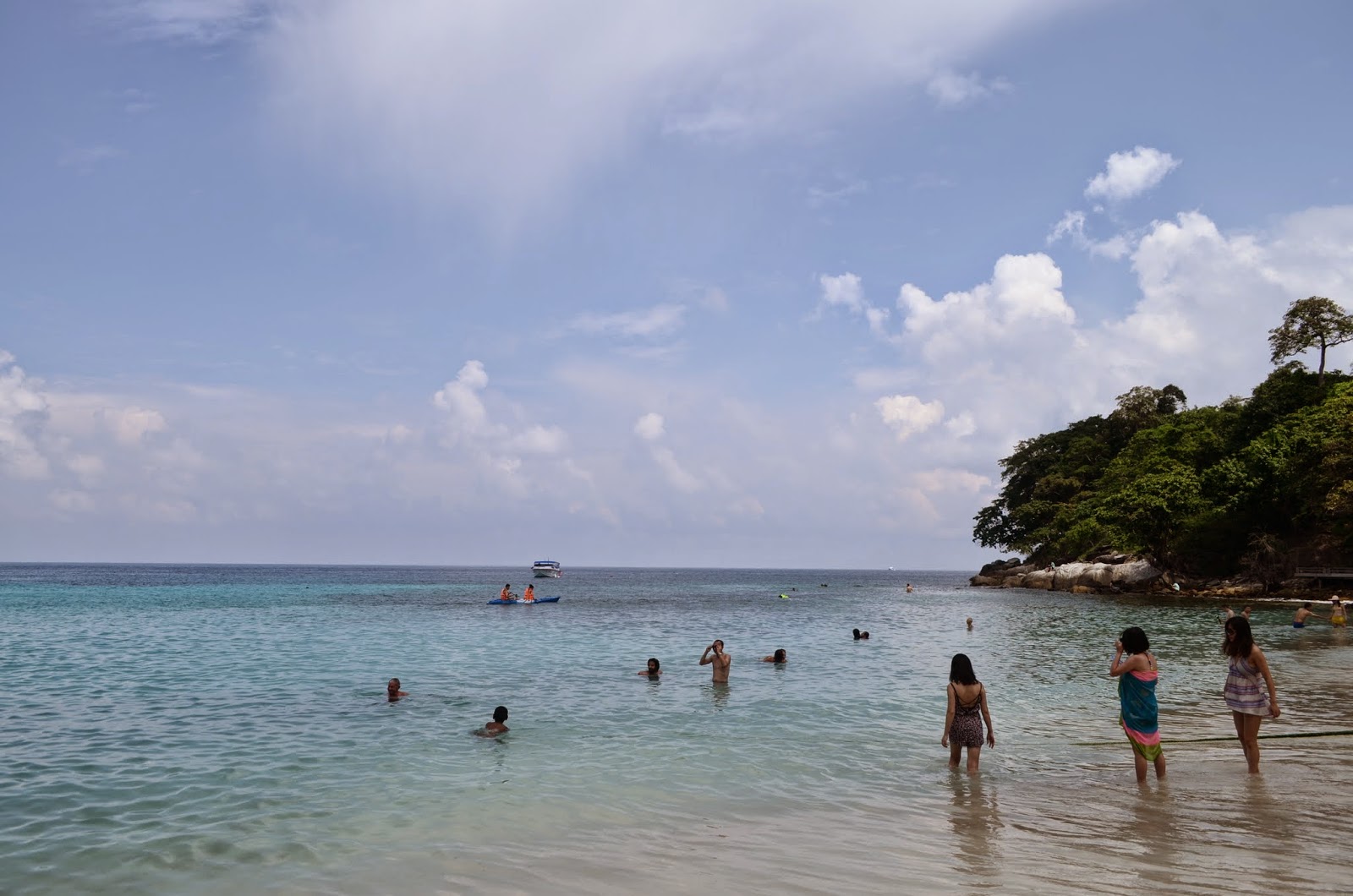 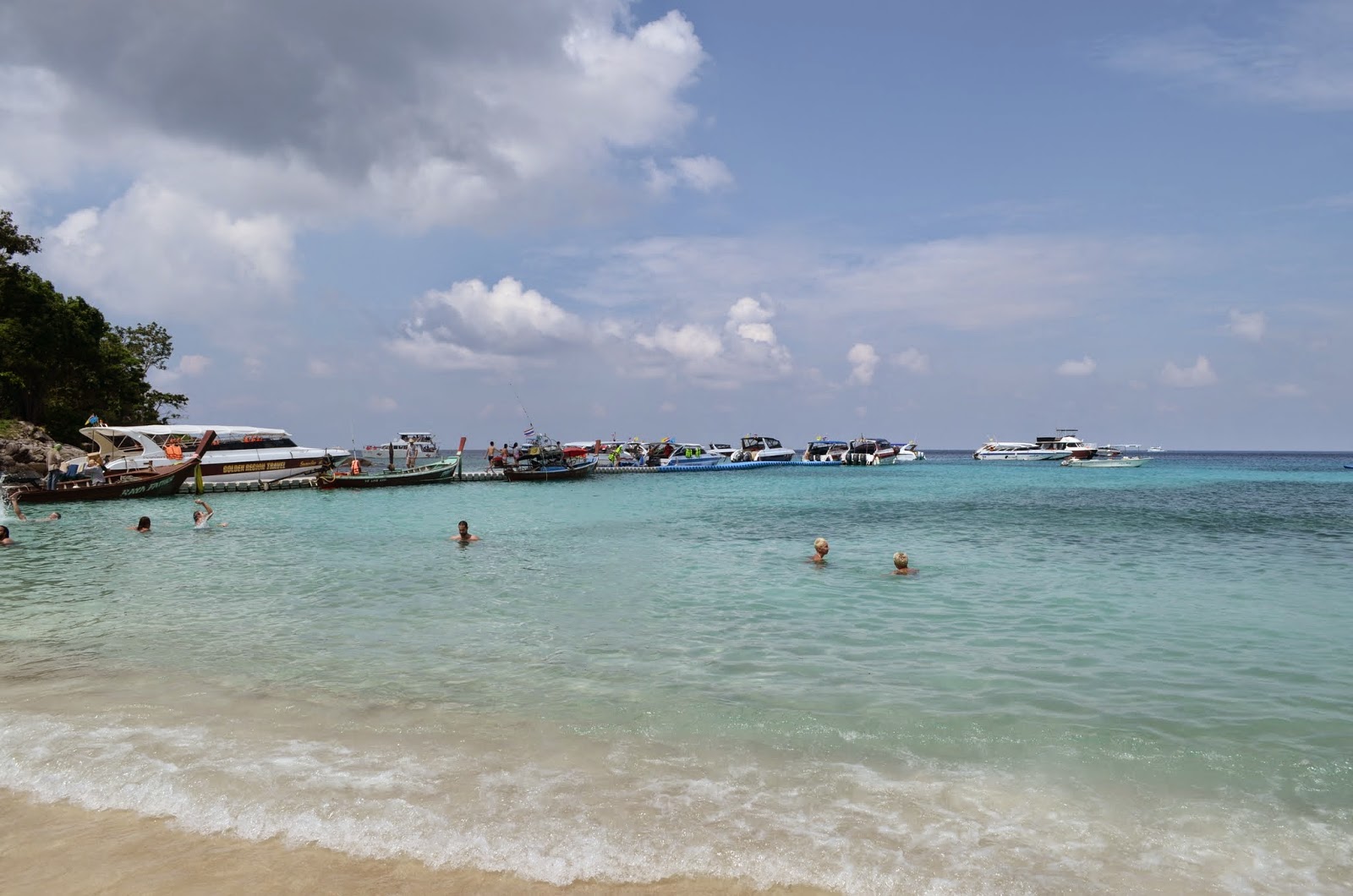 At 4.00pm, we were called by Pi to board the boat. There and then, an accident occurred at the boat rotor. The rotor must have knocked at the rock or coral or pier or something and it broke! The whole repair took around 1hr30min when slowly boat by boat were leaving the island. Finally, the boat was repaired and we arrived the Chalong Bay pretty late. The minivan were waiting for us by the pier and we were quickly sent back to the hotel.

At night, we went to the other side of Ratuthit 200P Road to find the famous club 'Hooters' and food hunt. We stopped by the only optical shop that sells contacts, Top Charoen, to buy extra contacts. There is another optical shop called KT or something buy they don't have contacts. We were the only customers in the shop so we asked the shopkeepers to teach us some simple Thai, while a golden-aged Russian couple walked in to, buy specs I suppose? They spoke completely Russian and didn't even bother to try to speak in English!! All 4 of us wanted to at least help to understand, but NOPE, they speak Russian no fail. When we were paying for the contacts, the wife said something about the contacts and pointed at the box, and I assumed she wanted me to teach her how to wear it, so I asked loh, manatau she looked into my eyes so confidently and pi li pa la talked Russian as if I understand like that!!! Dumbfounded, we quickly ran out of the store, leaving the two shopkeepers with the couple.

We had out dinner at More Ma restaurant. It is located at the quieter part of Patong, opposite Grand Mercure Hotel. We had fish, tomyam soup and pork/chicken and the meal costs 550B. There is a seemingly very quiet market (as opposed to Jungceylon and Bagla Road which are merely 100m away) called Otop Market.
HonNee trip