The reason why we ate so lavishly the night before

When I was taking the morning shower, Hon suddenly yelped so loud it shocked me! He is a very calm man so that was very unusual. I asked him what's going on, and he slowly looked up from his laptop, and said "I wanted to check in our flight, was frustrated and wondering why the hell they don't let me check in, and... ... ... actually our flight back is TOMORROW!!!"

I was stunned for a good minute. I was already packed, my luggage and my heart to be ready to go back, and he told me this!? This is so NOT him to be so 糊涂 blunder! Blunder and clumsy and absent-minded are supposed to be my department!! LOL! He was like "What happen leh?? I die die thought it's today!!!"


Anyway, it's the fact lah, had to deal with it. Luckily Hon always have a backup plan - meaning extra money hehe! Need to extend motorbike rent and hotel for a night. Now you know why we booked three nights instead of four (if you still remember my previous story)

Oh yeah we stayed to chit chat with Mr. Pinit while he changed the date on the tickets for us. All of us tried our best to exchange information LOL!! He told us about the Chinatown in Phuket Town and a restaurant in Rawai Beach called Sea Gypsea which belongs to his friend. He kept saying "Sea Yibsy my frend open Sea Yibsy you go tell them Mr. Pinit my frend Mr. Chart and waif Miss Ja go Sea Yibsy cheap seafood Sea Yibsy" Ya he kept repeating Sea Yibsy so cute LOL! All the way to Rawai, both of us kept imitating his Sea Yibsy, even after come back also same hahaha!

Thanks to the blunderness, we get to cover the other part of Phuket =))))

This day's coverage: Phuket Town - Wat Chaithararam - Rawai seafood
We stopped by the Shell petrol station in Phuket Town to refuel one last time for 100B.

One fun thing about riding motorbike is that, you can stop whenever you want as long as you are not obstructing the traffic. I asked Hon to stop when I saw seemingly dessert stall or something, at an alley called Soi Yaowarat, I was wrong, but opposite the stall was a Boat Noodle restaurant!! There's been a craze about this boat noodle thingy in PJ area that you can simply Google about it, so we were like, well since it's originally from Thailand and we found this in Thailand we should eat it here lah!

Luckily the handsome boss (who is also the main chef) speaks perfect English, we had no problem ordering food. The ordering is pretty simple, you choose you want chicken or pork or beef soup/broth, which kind of noodle you want (egg noodle, glass noodle, small kuey teow, bihun), spicy or not spicy, and waited to be served! When Hon went to order, a boy delivered a plate of cut-up cucumber and some raw leaves, and asked me something in Thai. I was dumbfounded and shook my head said I can't understand, and he just walked off... Hmmm... In the restaurant that time, we were the only foreigners...

I have heard so many stories and seen so many pictures about how small the portion of the boat noodle in PJ is, how one can gobble down an entire bowl, how stacking up the bowls are some kind of a trend, how Hon's BIL who is a light eater can't get full after 6 bowls but it's already RM12 for that meal, I was amazed and curious!!

It was priced at 20B per bowl, but the portion was definitely 3-4 times larger than those back in Malaysia. The soup is very thick of aroma and flavors, it tickled my taste bud!! =) I was half full after 2 bowls, and Hon suggested I try the beef ones as he doesn't take beef. He ordered the meatballs.

The whole bowl stacking thing didn't seem to be a trend here. Everyone ate the max 2 bowls per person, some had rice(!!), and that's it! Imagine I might have to eat at least 10 bowls/spend at least RM20 only to get half full back in Malaysia!! As the times hit noon, more and more people came flooding this place, and slowly there's queue forming up in front of the shop. Apparently here also people queue up for boat noodles huh! We paid and leave.

Midway to town, it was drizzling so we stopped at a cafe called Peakaboo Cafe to avoid the rain and had a cup of coffee.

Apparently, this On On Hotel is the first hotel built in Phuket Town, very 古色古香 feeling.

I walked in the needlecraft shop next to it, Hon was like "Are you sure? I wanna see how you gonna buy things in here lalalalala~~" LOL as if I was gonna buy anything lalala~~~

Then we drove to the bus terminal area to had afternoon tea at the roadside stalls. We had corns and pad thai, which is so much cheaper than those ridiculous food in Patong!!! 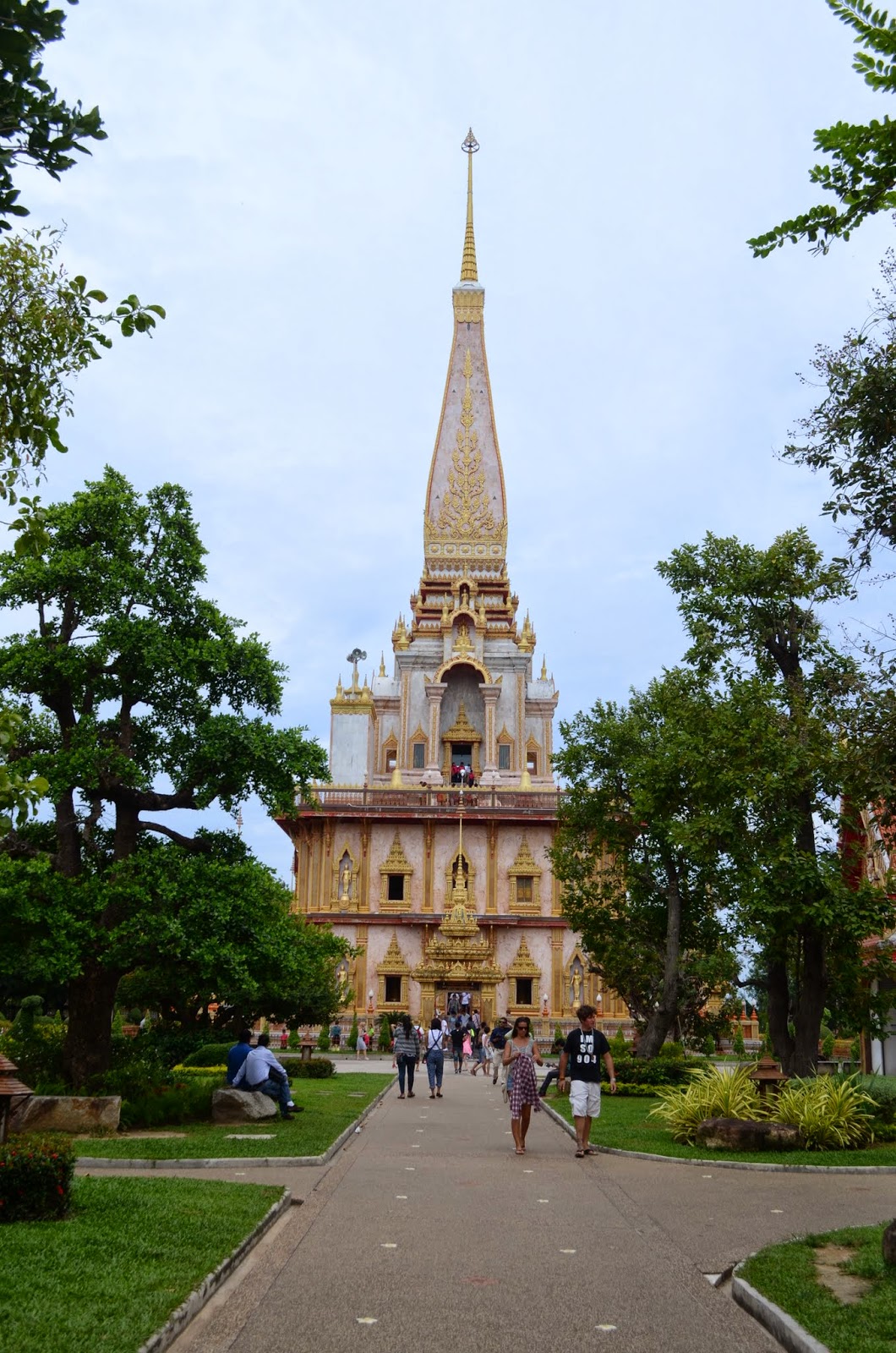 The temple was originally built in 1837, which means this Wat is the first and oldest temple in Phuket. But it didn't look old to me... Everything was refurbished, it all looks soooo new and classy, even the toilet also very very pretty!


On our way going in to the temple, we saw this...

WT..... IS HE HERE!!!??!?! We couldn't know for sure lah coz we didn't follow/stalk the driver around, we just stalked the car. LOL The last social media reported, he was in Thailand transform into a monk. This was a total surprise!! Of course lah it was purely kepochi to snap this picture.


We stopped at random places to reapply our sunscreen too. Once at a park, once beside the bus terminal, once in Macro hahaha totally random!

Mr. Pinit was like "Rawai very fun!! Play water!!" but I think he meant sightseeing lah coz all Rawai has is a pier and stretch of beach where countless boats parked at the side, totally not play-water-friendly. 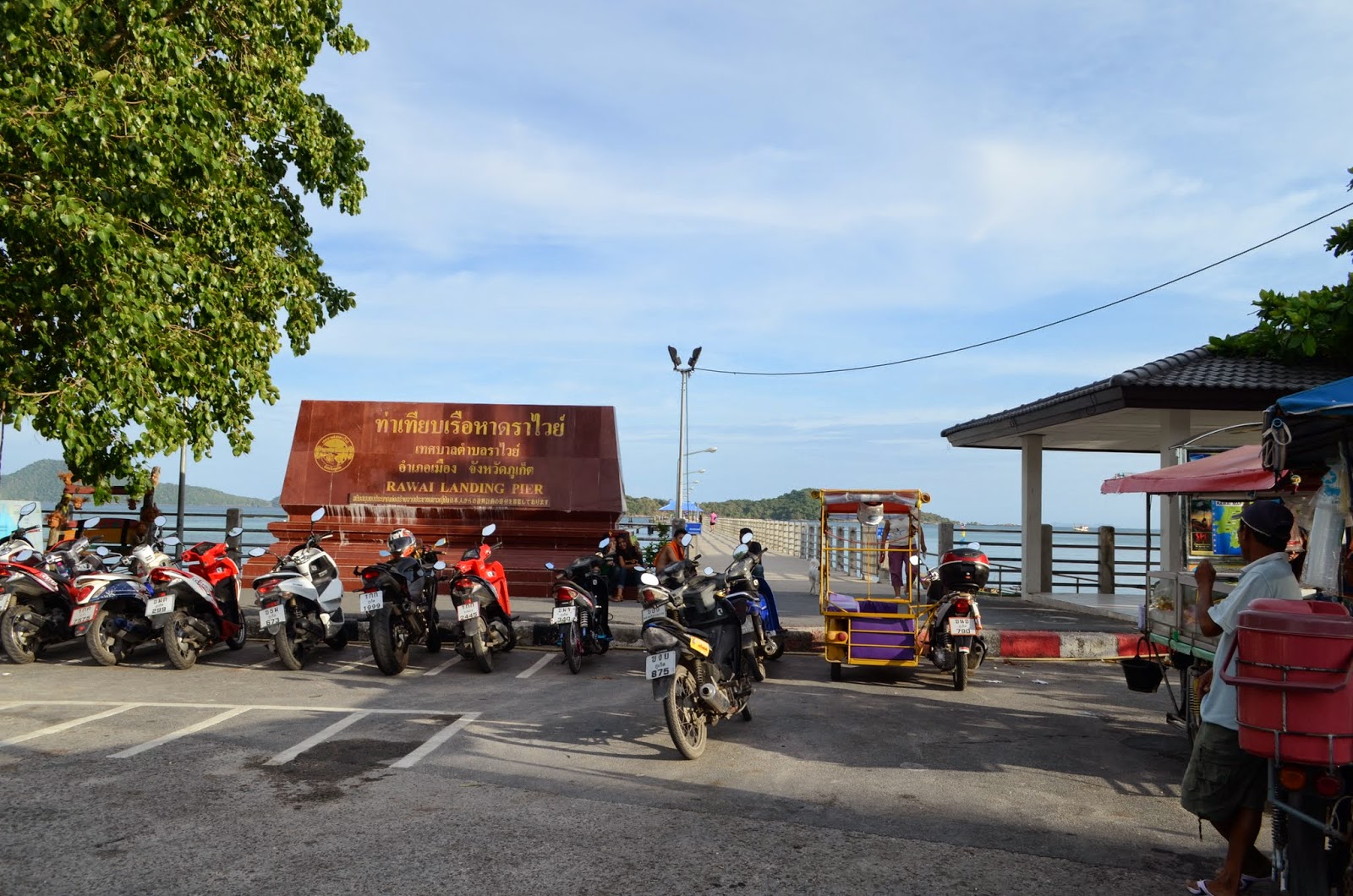 However, magic do happens....

LOLOLOL boh pasal-pasal... From the 'Rawai Loading Pier' sign, turn right and you'll see stretch and stretch of seafood stalls, the kind of road I will only walk 10 steps in and walk out uninterested if I am not told about the 'awesomeness' inside the lane.

It occurred to us this was the only possible lane that Mr. Pinit was talking about when he told us about Sea Yibsy, so we walked in to try our luck. The seafood here in Rawai was indeed so much cheaper than those in Patong, excited!! 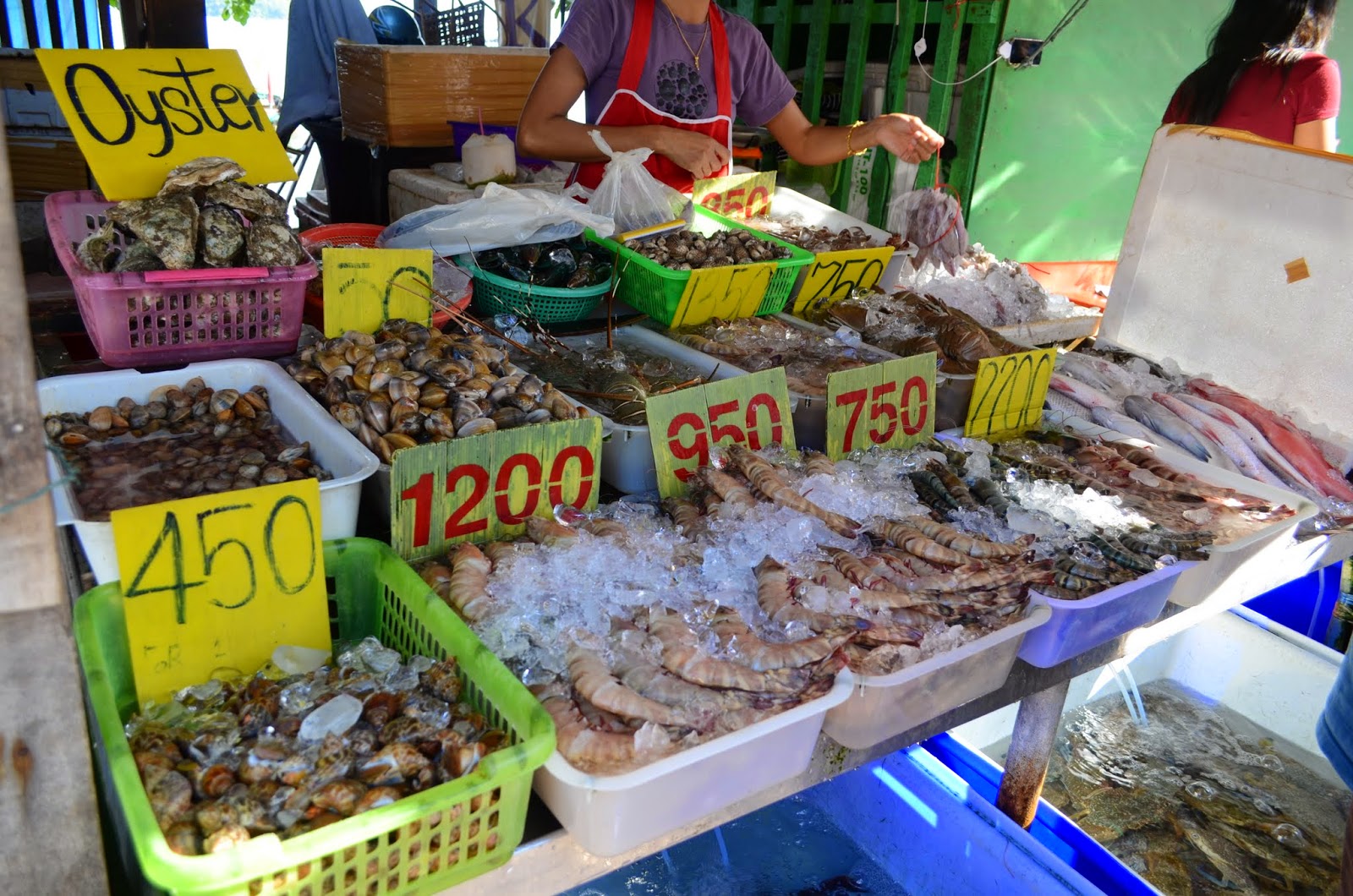 ...and, amazingly, we found the Sea Yibsy afterall!! 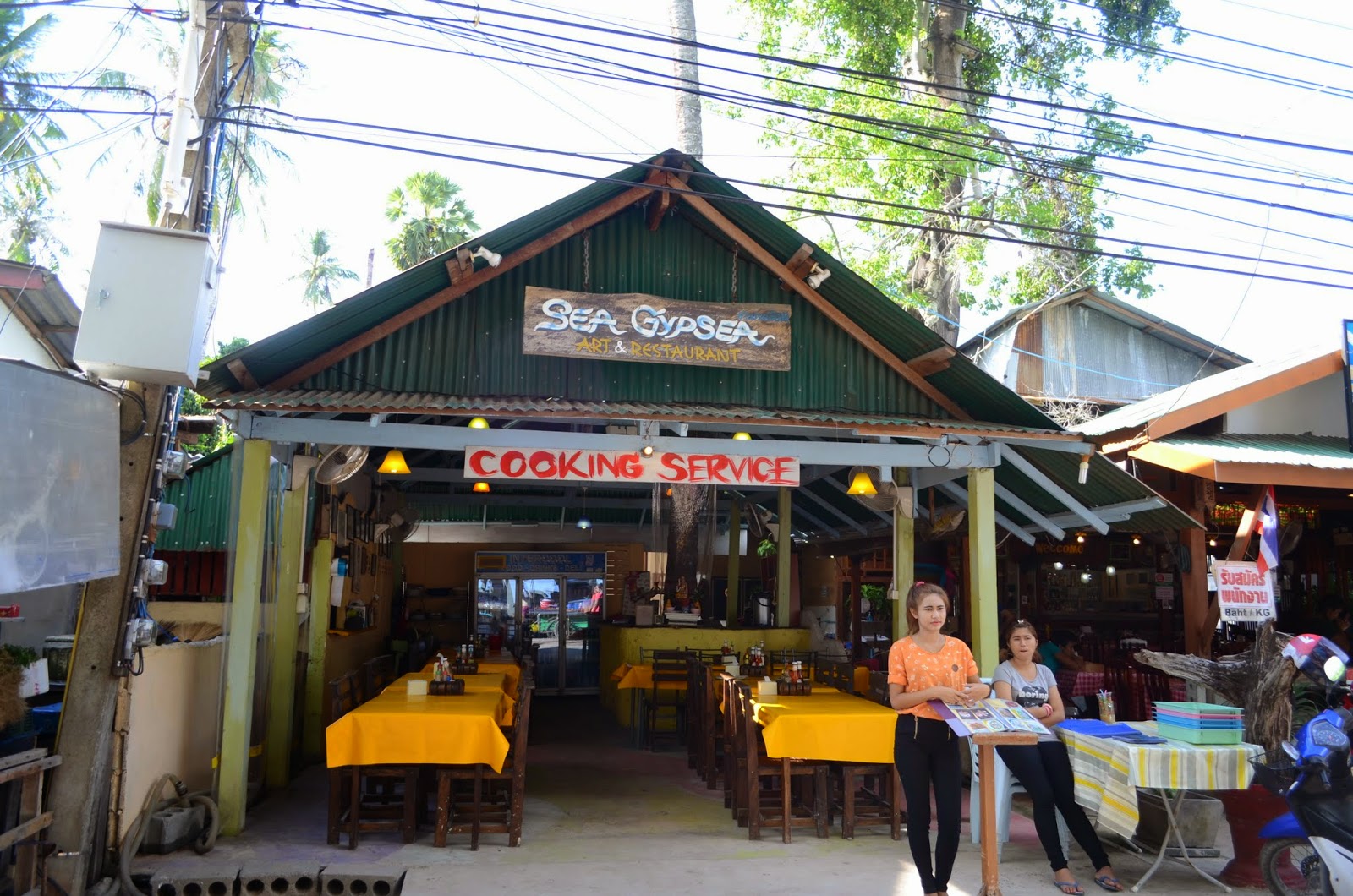 There's actually TWO gypseas here, but Mr. Pinit was very specific in mentioning after the seafood stall is the restaurant, I was confident with this one while Hon insisted it was the other one, and I WIN! =) Miss Ja came out to greet us hehe!

When Hon walked further in to look for money exchange counter, he was approached by an uncle who offered him a cheaper rate of the food, and the uncle is from Penang so he has better deal for Malaysian Chinese!! Wow! Too bad we already bought seafood and ordered our meal in Sea Gypsea...


The seafood costs us 500B: 250B for the prawns, 200B for the grouper and 50B for lala. The restaurant charges 50B cooking fee per item, but fish is according to weight, so I think the heavier it is the pricey the cooking fee gets too. Overall, this meal, including the fried rice (which was super nice!!!) and drinks, costs 300B + the 500B seafood = 800B. OK lah acceptable, but we would prefer the 300B prawns in Food & Drink Festival in Patong.

Initially Hon wanted to change more money for some other food, but we were so full after the meal, he cancelled that plan.

Had our last feast of sunset at Phuket Provincial Land Reform Office...
Later that night, blackout at our side of the road, so we went out for a walk. Went in this Dee-Lish Restaurant as the manager did a very vigorous ushering job hehe, and because the live band seemed nice. The cocktail was at 99B for happy hour, we ordered two...

I think we were the only table who responded enthusiastically towards the duo live band, man and woman combo, the lady singer interacted with us all night long YAY! I lip-synced while she was singing 'Closer To You'; she asked for our name and country of origin; we get to request a song!! =) - Hon asked for 'Way Back Into Love' and we were asked to sing on stage with them LOL!; She asked us to come dance at some romantic songs she sang and we were too shy haha!! An hour later, the electric came back, we paid (summore the waitress assume we wanted them to keep 10B change?! No way I would rather tip the live band), tipped the live band, photographed with them and went back hotel. 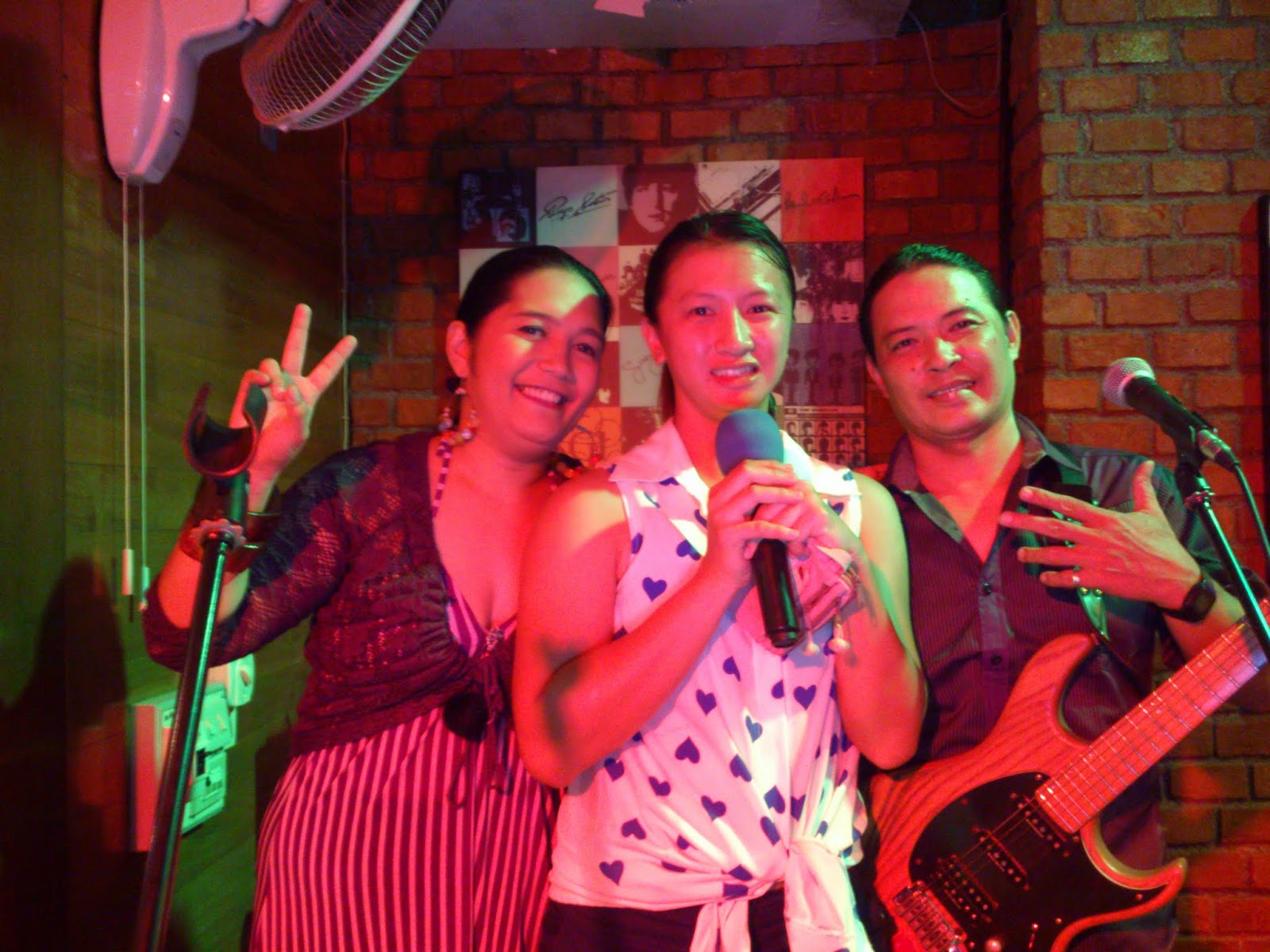 Some fun way to end the last night =)
HonNee trip