December 08, 2006
On the 2nd of December, we went to Benjamin's wedding at Serdang behind South City Plaza's Golden Lake Restaurant.. hmmm, i know Ben will be damn frustrated if he read this, but 'faithfully' (haha! =P) it was not a really satisfying wedding dinner for all of us who attended.. -_-" so i only manage to take one picture that night..

<-- Ben's Honda Civic! (no need to buy the number.. tak kena one..)
BUT his wife Fiona is so gorgeous!! (..ahem, although she is 'less sparkling' in their wedding albums as Ben took all d sparks around him.. -_-") So until today, we still talked bit bit about the sang-ka-la-and-trafficjam-and-no-liquor-at-all-!! wedding dinner... HAH! and another thing is about when will they get a baby .. muahahah!
Last tuesday (5th Dec) was our company's year end dinner at Shogun Japanese Buffet Restaurant. We were quite excited about it, and when the clock pointed 5.35pm, we were standbying and staring and signalling each other "oii... what time we wanna belah?? boss and tracy still sitting le... traffic jam leh... how how... hmm... *wink* let's go!!" so 4 of us (kim, nic, karen n i) drove 4 cars heading towards 1U!! As we arrived quite early, so we hanged out in front of the restaurant's entrance and i took this:-> 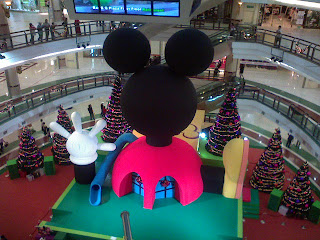 a GIANT 'face-off' Mickey Mouse!!!
then we still waiting n waiting until our goddess (don feel like describing her as it will only pissed me off~) 'manage' to get a seat for us.. then we went in and still waiting as our VIPs ->BIG boss n tracy didn't arrive yet, so for us small small juniors, it would be better to wait.. (Duh...) then our goddess was :"go n take food lar.. tracy said no need to wait for them... go lar... *the same sentence, i think she repeated for 4-5 times.. as usual..* go lar go lar..." as everyone was having silly fun without hew-ing her, she stood up and went off --> to the foods ofcoz... then later on Tracy arrived, followed by my BIG boss few minutes later... and the interesteing part when we were taking the food:
BIG boss:"I TELL U GUYS HAH.. DON TAKE RICE!! TAKE THOSE EXPENSIVE ONE LIKE... *hmm... i cant recall what had she say.. -_-* BUT THEIR SUSHI IS NOT BAD.. HUH! HUEY NEE, TAKE THIS! THIS IS GOOD!... NO NO! THAT ONE YOU GOT IT ALREADY MA.. WHAT FOR YOU TAKE ANOTHER ONE?? ... ... 'ermm... this leh?' THIS ONE GOOD! HAH! TAKE FISH EGG ONE! ... ... bla bla..." *my boss is cute neh.. =P*
so our first round was sushi!! 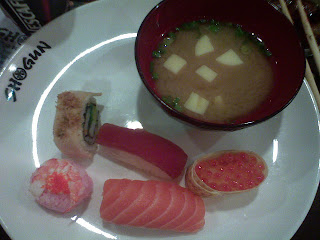 Then we went on n on n on for secong, third and fourth round!! 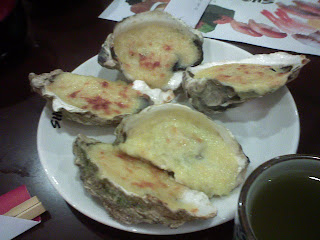 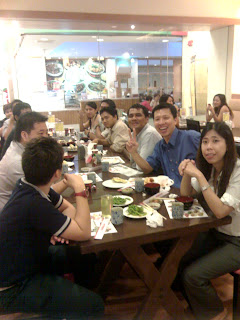 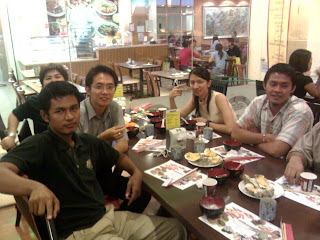 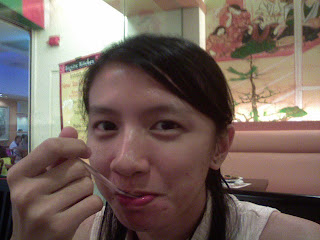