Showing posts from May, 2012
Show all

May 28, 2012
Theresa was away for a trip, so I was 'in-charge' of Jack-sitting. Theresa sms-ed me about Jack's depression when they were leaving the house, so me, the comforter, to the rescue after I finished my furbrats' stuff.

(Oh, btw, lil Moz suffered a minor diarrhea few days back, causing the foul-smelling bedding and it's totally unpleasant, but luckily he was all good after a day of mushy poos)
Jack is always a darling. He got all excited and jumping and running around the place when I came. I brought along my cross stitch kit to spare the time. No laptop this time since the screen was faulty and there's no way I brought along the monitor and stuff. Too troublesome!

May 20, 2012
Since young, we (us Lim sisters) were aware that there's no point of arguing and throwing tantrums, typically in public, because our parents would just leave us there and mind their own business (Well that's what my mom told me, and I believed her because she's my mother).

Here, the point of this post is because ahem... I want to brag about my good manners in public.

Last Saturday, there was a 文娱晚会 'Cultural Night (?)' at Kangar Buddhist Society, a friend and I went there after dinner.

By the time we arrived, the show has began with few singings. We settled down at the stands for the rest of the show, and there's when our nightmare began.

Around us were groups of youngsters, most likely Unimapian, sitting in front, behind, left and right of us. When the show started, the crowd was still in their solemn silence mode; but when one of their friend* performed, they went crazy from then on til the end!!

The crowd was super noisy!! I noticed some of the elder groups at th…
1 comment
Read more

Movie I Watched (Over the Weekend)

OK lah the only reason I was so keen of waiting for this movie is because of, none other than Johnny Depp! His appearance in the trailer is Edward Scissorhands + Sweeney Todd blend into one, I mean the make up.

For me, 'Dark Shadows' is funny and entertaining enough, but it's hard to please those Imdb people.

The whole movie is alright. Good (looking) actors + actresses; some really funny scenes and punchlines; I especially like Carolyn Stoddard, so rebellious and bad girl (I didn't even realize she's the girl in "Hugo", just thought that she's very 面善)

Some downside though (my own POV):
1. Angelique's make up is tooooo heavy. The face is too fair, and the lipstick is too red. I know she is a witch, but is it necessary?
2. Angelique + Barnabad love making part. Yeah I know they have their never ending love-hate story and one is witch and one is vampire (explains the 'extraordinary' love making process), but, again, is it…
1 comment
Read more

Cycling Round 2 at Perlis

The weather was windy and 'small' rainy on the morning.

Started off at 8am, Cikgu and I began our journey with breakfast at Restoran Buluh something in Jejawi. The traffic was OK.

From Arau, we passed by the newly built correctional centre, going towards Chuping using the Kok Klang route. As we entering the outskirt area, the road was narrower, less traffic with nicer view and fresh air.

The stretch of Felda Chuping main road was one nightmare. Fortunately the weather was treating us very well, the sky was cloudy and windy, and the sun wasn't harsh at all.

Exiting from the main road, we had a drink at Batu Bertangkup and continued our journey to Tasik Melati (it's so huge ass big!!).

Having lunch by the golf club at 12pm, head back to Kangar and arrived at 1pm. We didn't …
1 comment
Read more

I had a 'Screen' Problem

May 07, 2012
The other day, my laptop suddenly decided to sabotage me AGAIN, by blacking out his screen. This wasn't the first time already, but still I was terribly furious, jumping-up-and-down-cursing-here-and-there kinda mad.

Moreover, this little cunning fellow decided to trick me! When I was frustrated about using him at the lab (and I did using the huge ass CRT monitor to substitute the blacked-out screen for 2 days), he decided to 'come alive', back to normal again and stuff.

The next day, there he went again. Jilakat betul!

Anyways, sending him for repair is not really my option currently. Ever since the beginning of the year, I have been considering a new laptop purchase, and I have been threatening this cunning fellow since then. Plus, this kind of 'black screen' repair gonna costs me another 200+ bucks which I would rather using it on the new laptop fund!

So, there goes my dilemma. Sigh~

Why does it have to be now!?

May 06, 2012
1) ...doing private stuffs. Dinners, going outs, this and that, I have been home to sleep for most of the days, and went out almost every single day in a week, and out for whole day during weekends.

3) ... wedding dinner at Alor Star last weekend. Mom, dad and Lim Erjie came to the north; met a whole lot more of distant relatives (relation related, not distance); proven that I have a LOT of relatives in the north!

The Chronicles of M&M - Vet Visit and Eye Treatment 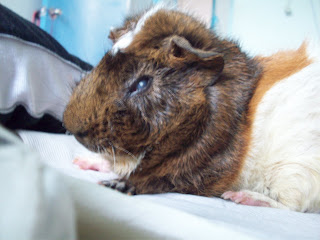 P/S: The new blogger layout is so complicated, I dislike it :-(

I got cautious and doubts after the local vet department's diagnosis, so I emailed a vet, Dr. Jenny in KL (who is highly recommended by forumers and guinea pig owners) for a second diagnosis opinion, and I did the rightest thing!!

Apparently, Neodeca contains steroid (Dexamethasone on the label). According to Dr. Jenny, the steroid will not effect the guinea pig in general, but it is a form of steroid anti-inflammatory medicine which can help reduce swelling and pain but it can delay healing at the eye. According of Shin Yee, my chemist friend, steroid is very 'strong', it might heal the wound now but might not work if the same kind of wound or disease relapses in the future and there would be very hard to find some other alternative medicine.

Not only that, Dr. Jenny gave few possibilities for the cause of the eye problem, including infection, injury etc, and …
2 comments
Read more