Since our promised motorbike return time was 9.00am, we set a plan a night before that we wanted to have the last dip in Kata Beach, as early as 6am, and so we did!

It was so early, the traffic flow was scarce. Karon and Kata Town were completely empty in fact! It was fun having a morning dip in the wide ocean, and the water wasn't cold if you are wondering.

It was a short trip, so we got out half an hour later, took a shower at Club Med entrance*, and went back to hotel.

*Club Med Phuket has a shower head at the entrance, the one we used on Day 3, Hon completely ignored the guards who were calling for us and I felt slightly ashamed about it. So, this time, I asked Hon to at least ask the guards properly and politely to use the shower, he did, and well, the guards immediately say OK. Hon assumed it's a community service Club Med gives to the public, a place for the public users to wash off the sea water, please take note ya!!

We head back to Patong, had fan tuan breakfast, packed, check out, had out lunch at Wine Connection in Jungceylon Mall, and walked to the bus station. Mr. Pinit was already there standby for his morning customers.

At 1.00pm, the minivan came, there's only two of us Yippie!! We dozed off all the way to airport lalala~~~

1) Phuket is an all year round holiday destination but, like any other islands in Thailand, it has its low and high seasons. Low season is between April - October and high season is between November - March. There's pros and cons in choosing which season to visit, be sure to pinpoint the main agenda you want to do in Phuket. Some islands are not opened during low season such as Similan Island which I heard is supremely beautiful.

2) No matter what, I would still recommend to visit during low season as everything (except food) is cheap! I cannot emphasize this more as I talked of this so many times throughout my trip posts.

3) Staying in Patong has its pros and cons. Pros: near to beach, near to nightlife hot spot; cons: very pricey.

4) Staying in Phuket Town, according to Hon and other information I get from Google, is a cheaper option as food and everything else is cheaper too. Cons: 18km to beach.

6) Don't trust those who says Banzaan Fresh Market in Patong sells cheap seafood. Cheap your head! Even the roadside stalls' food also NOT cheap!! Opt for Rawai if you want some cheap seafood. Fastfood in Patong seems more reasonable than the overpriced seafood.

Thank you for all of you who has been reading! Here's some bonus for you, my bikini shots ;)

LOL sorry lah I find my front view very no eye see -____- And lately I've been doing some upper and lower back workout, so here's to flaunt my upper back and 'little mouse' 小老鼠 hehehe... 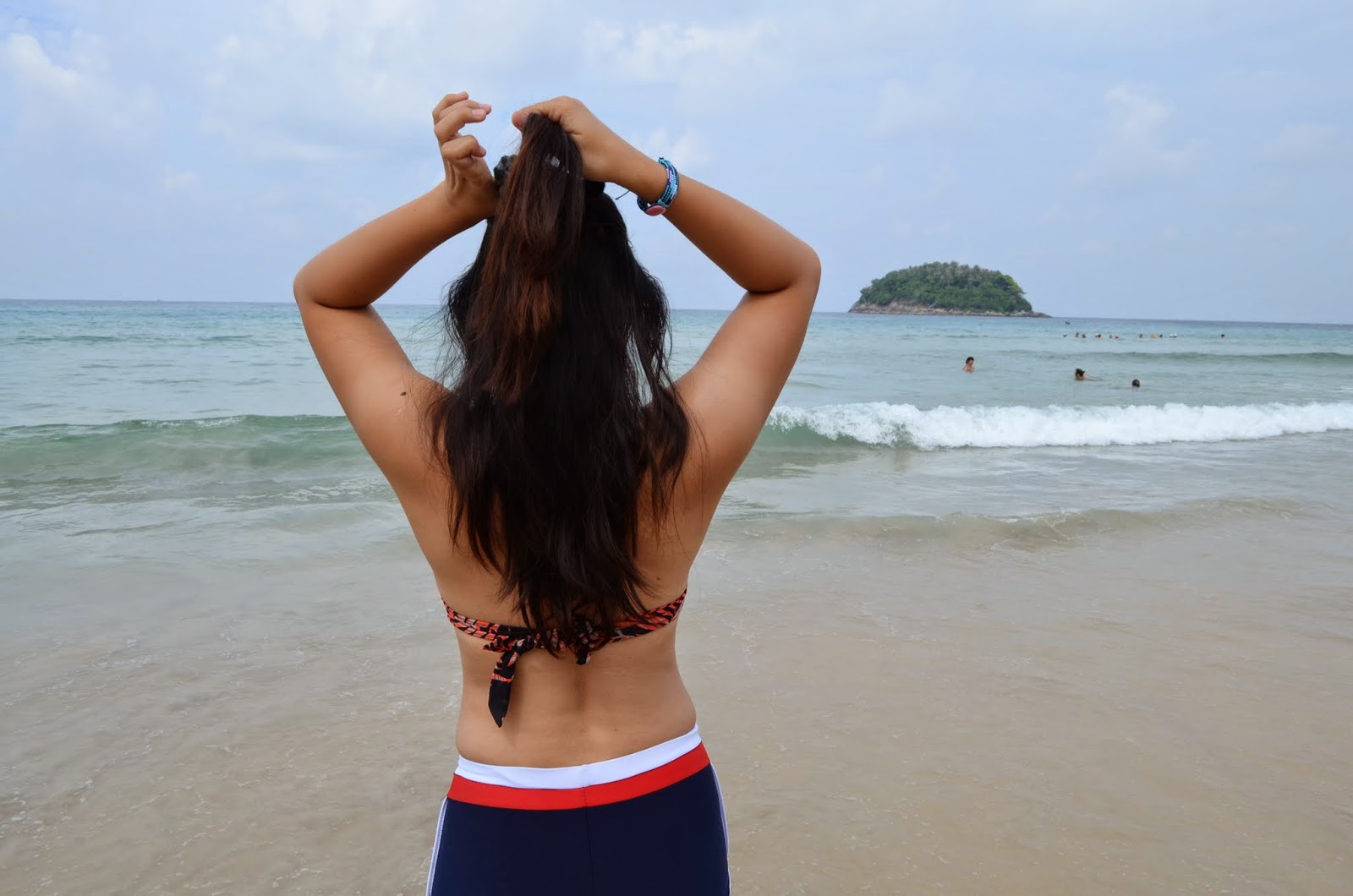