November 27, 2014
This post is sooooo long overdue but I still wanna write about it.

Hon and I had a dating day some Saturdays ago. The first half was only us and the second half was with his friends.

Both of us were being really healthy, slept before 11 and woke up at 7! That didn't include cuddling time though haha!

We started the day early by having breakfast at Yut Kee. It kinda surprises me that we had to get there so early 'so that we don't have to queue' said Hon.

Apparently Yut Kee is one very very famous restaurant in the heart of KL that you can expect a queue EVERY.SINGLE.DAY, especially (not sure if there's an 'especially' though coz it sounds like there's a line forming every day) during lunch hour on weekdays.

We arrived around 8.30am and the tables were almost full!! Hon said the new shop (Jalan Kamunting) has more tables than the old lot, but it just means the queue gets shorter perhaps? LOL. In such famous and crowded place, 'dap toi' or share table is a practice here.

We ordered a Hainanese Pork Chop, Roti Babi, coffee, half boiled eggs for me, roti bakar for him.

Early morning eat pork chop no problem at all haha! The Hainanese Pork Chop has some sour-ish taste in the chop and the sauce. Sometimes I find chops meat being too dry like chicken breast, but Yut Kee's version of pork chop is really yummy and nice to my taste bud.

The Roti Babi (pork bun) has shredded pork inside the bun, which is very very unique because they are the only one shop who has this kind of cuisine. The staff handed us the Lea & Perrins sauce to match up with the bun. Hon nearly poured soy sauce on the bun as there's one Lea & Perrins bottle on our table, then after some clarification only we knew they refill the bottle with soy sauce 好家在还没倒！！


I never been to the old shop, but from the outlook of the old shop I can assume it has this aging and getting old kind of feeling, and this new shop totally refreshes the environment and ambiance.

We asked for the roasted pork roll and was informed that it is only available after 11am. I would come back again for the pork roll as it looks (from the internet) very unique and special.

While we were eating, there were already a queue of 2-3 group of people, so you can't hog seats for too long as everyone from the owner, the staffs to the customers will stare at you and your table until you walk off. We hurriedly finished our meal and let others to take our seat.

By the time we finished breakfast, it was only 9am++. Where to go in KL at this hour!?

It was drizzling at the time, so those outdoorsy parks such as Taman Tasik Titiwangsa and Tasik Perdana/Lake Garden were out. Think lai think qu the only possible place to go was Pavilion LOL. Donno why we thought of that also, maybe because they have underground carpark and the rate might be reasonable?

The parking lot was VERY empty (废话 nonsense no one would come to a mall so early except the ones who work there) and we parked beside the lift entrance, only to realize that the automatic doors were not operating before certain time. We've walked to few doors to no avail, directions given by guards also very vague, they point point point and asked us to follow the shop assistants THEN only we managed to find the unlocked automatic door lol. Not to mention the RM3 per hour parking rate. We parked for 3 hours and tada RM9!!

But, of course lah, at 9.30am even ghost also lazy to open shop for you, so we wandered around the outdoor dining area, then walked to KLCC via the covered air-conditioned walkway.

We had a reservation at Black Market at 12 noon. Hon chose the one at Kampung Pandan because it was right next to the Royal Selangor golf course, which means awesome greenery view. 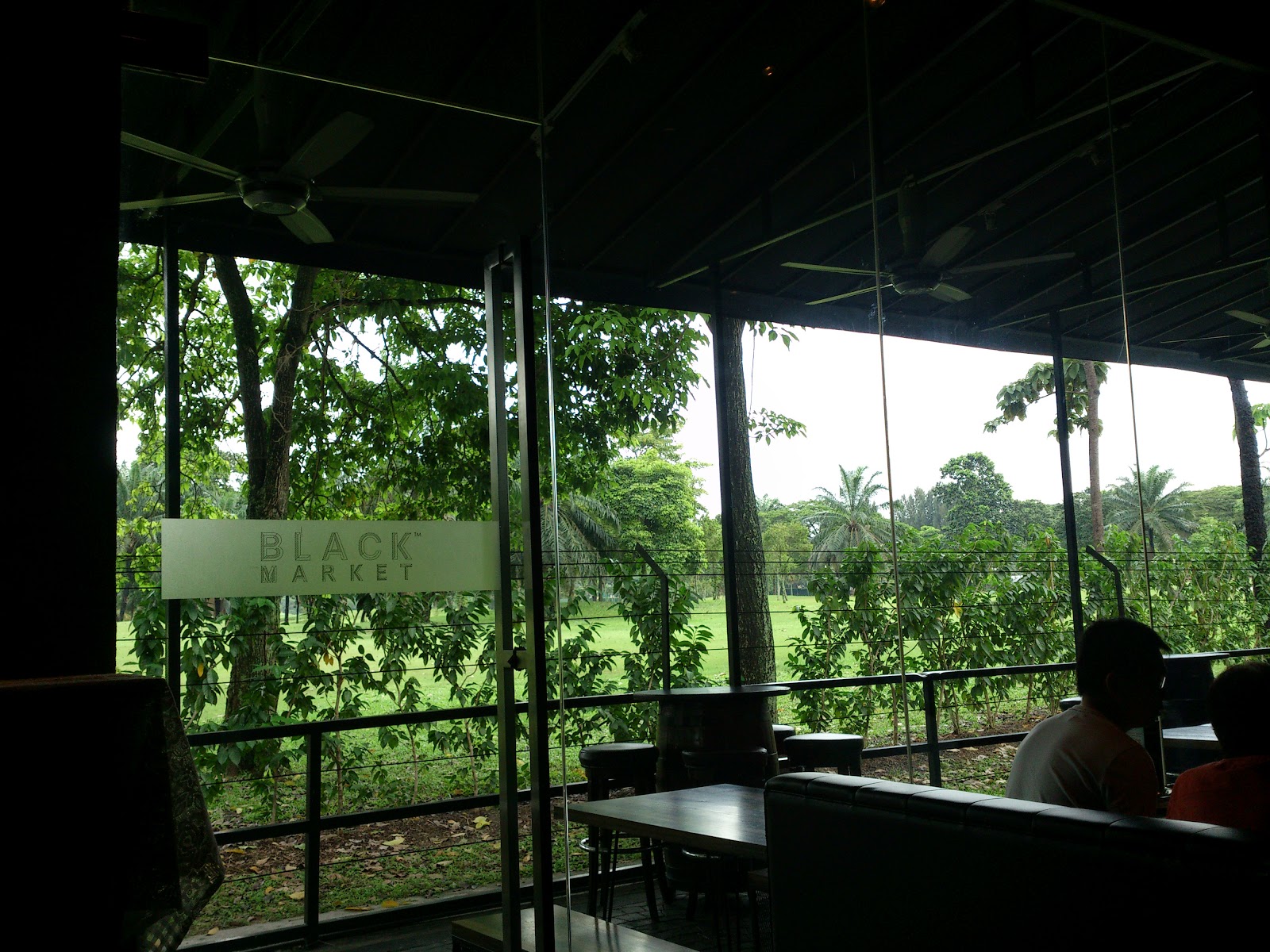 This was a Groupon deal, which caused some hurricane stir between Hon and I because of misunderstanding and interpretation problem, which was also supposed to be a RM200 voucher but became RM150 instead because of my problem. Nevermind lah we are all cool now.

Like the name, the restaurant itself really is 'black'. I personally think it was a little too dim, even on a bright sunny noonday. The deco is black in color, the paint is dark, the tables and chairs are dark. 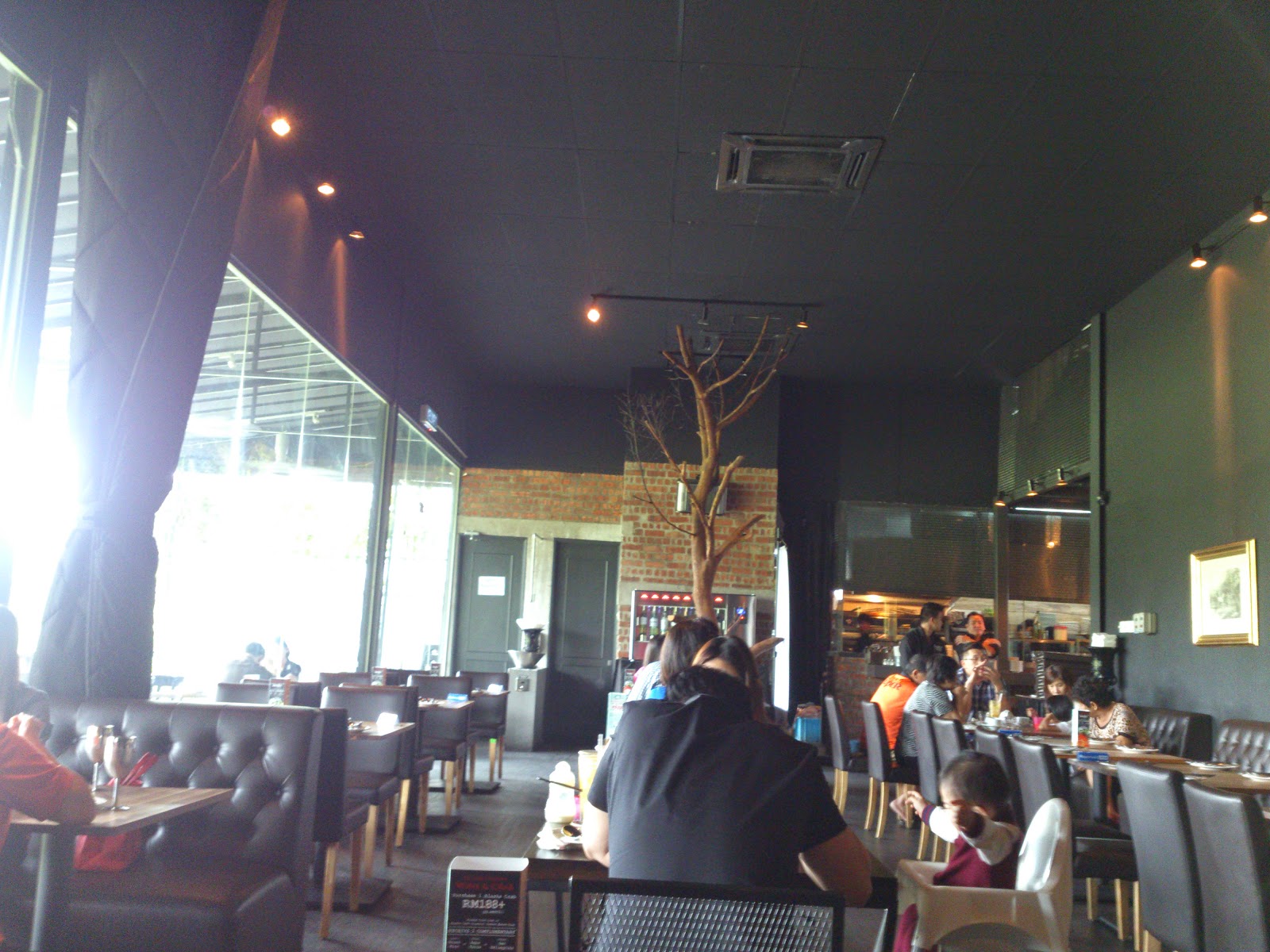 We were handed the menu, and since it's a Groupon deal, lunch set is not available for us.

It's actually my first time trying these sorts of cuisine - truffle, foie gras, huge sized scallop and squid ink spaghetti. Everything was so new to me!

I don't know how to make review on food, I'd just gonna talk about it in commoner's way:

Truffle mushroom soup - when this was up, I sipped on the soup first then Hon told me to dip a little truffle to sip together with the soup, and went "香吗香吗香吗？有没有一股很不一样的香味？" meaning "Nice or not?? Can you taste that unique scent and taste??" I was like "hmm.... It is nice, it is very good smelling, but I donno about the unique thingy it just tastes really good"
-_____- it's like feeding truffle to king kong all gone wasted...
(wanted to say pig but truffle hog too famous cannot ruin their reputation)

Black Market signature pork burger - It is very special kind of burger because, unlike any other kind of burger, their patty is actually slow cooked braised pork (according to their menu's description). Kinda unique that you can't find it in any other places (yet).

Black Market's Foie Gras - (according to menu) Foie gras cooked to medium with splash of premium cognac, served with scallops, rockets and toasts. Cognac, couldn't detect or sense at all LOL. It's my first time seeing such big scallops with roe, too bad I'm not a roe person so I did not appreciate that, just swallowed everything in. Foie gras, hmmm a very very oily chunk of jelly is my choice of comment. I'm not a internal organ person too but I find foie gras to be very oily, very slippery, very juicy, unlike those yucky feeling whenever I ter-eat a pig liver.

Black Scallop Pasta - the pasta was cooked TOO al-dente, and they were little too generous on the balsamic sauce because it's too spicy for my liking.

The total bill came to RM154, paid with the RM150 voucher and RM4 sendirian berhad (+ RM55 from buying the vouchers).

We reach to a conclusion that, we die-die won't dine here if we are to pay for the full price.

Later that evening, we had a gathering with friends at Hobby N Coffee at TTDI. We played Monopoly for the whole evening!!! I no bankrupt but was very poor in the end coz I didn't have much properties in my hand :(
food HonNee