It's another HCM full day trip. This time around, it was another tour guide, and bigger group than the day before's. A bus!

The tourist place staff came to 'fetch' us from our hotel, her riding a xe om/motorbike and us taking the taxi (on their expenses). We waited at the tourist place for our transportation, and on the bus touring the city to pick up other tourists. Our tour guide of the day was an old uncle (I forgot to jot down his name). 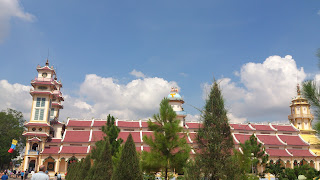 
The Cao Dai Sectwas founded in the 1920 by Ngo Van Chieu, a Saigon civil servant. Followers believe in a combination of the Islamic, Christian, Buddhist, Taoist and Confucian faiths. The symbol of the religion is an "all-seeing eye", which dominates the altar at the Cao Dai Holy See, a colorful temple described by Graham Greene in "The Quiet American" as "The Walt Disney Fantasia of the East". Monks dressed in bright colors represent different branches of the sect and the noon mass (one of four each day) is an amazing spectacle.


The Cao Dai Temple itself is magnificently huge. It has three high towers at the front, middle and the other end of the temple. Shoes must be taken off before entering the temple.
The mass was ongoing when we arrived, along with few buses full of tourists. The mass venue was strictly forbidden, and we were allowed to stand only at the back of the hall. The monks/staff were there to assist and direct the visitors of where to/not to go, and they would suggest visitors to sit down listening to the mass.

The second floor seated a group of band playing the musical instruments for the mass, and the monks circling the band chanting prayers. The staffs were controlling the crowd going up to the second floor, and we managed to go up when the crowd decreased.

There were eyes on the window all over the temple, which I find a little creepy. The eyes were watching every prayers and every visitors. In the middle of the chant, the monk in gold attire walked up to the altar, the place where we were not allowed to go/see. Other than that, I found something rather amusing...
We left before the mass ended (have no idea at all when would the mass end). En route, the bus stopped at a local restaurant for lunch. The food was nice! Tino ordered some local food which appeared to be interesting too...

We were utmost clueless when the food was served, so we asked the waitress to show us how to eat it. The transparent paper thingy was an edible paper, to be dipped in a bowl of water (turned to be glue-y when in contact with water), layer the veggie and chicken on the paper, roll and wrap it, and nom nom nom... It was quite nice, but didn't really fill up the tummy.

Next and final stop of the day is Cu Chi (pronounced 'Ku Ci') Tunnels. 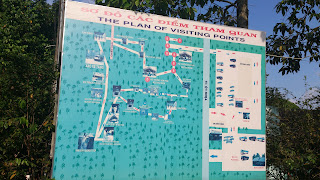 
During the war, Vietnamese guerrillas built this labyrinth of narrow tunnels using them to hide during bombing raids and stage surprise attacks. There are over 200 km of tunnels in the area, all of which were dug using only hand tools. Two sections of tunnel were open to the public and ex-Vietnamese fighters lead tours through the underground hospitals, kitchens and sleeping quarters. Visitors to Cu Chi can also fire AK47s and M16 rifles on a specially designed firing range.


Randomly jot on my note: Cu Chi Tunnels were supposed to be a getway to Saigon. There was no idea who first built the tunnel, and it initially served as hiding bunkers.
The Vietnamese used their knowledge and ability in the jungle to build a camp base in the middle of the jungle during Vietnam War. Using the natural resources as disguise, such as trees, earth, leaves etc, they dug holes, built traps, and almost all bases were dug underground, including the equipment making place, meeting rooms etc. 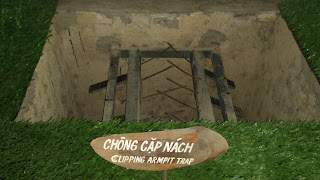 The tour guide led us to a grave-like mud pile, "This is a chimney," he said, and told us an interesting fact (for me it's interesting) about the chimney's function. Bear in mind that the kitchens were underground too, so how did the smoke travel? When cooking, the smoke travels through and on top of the tunnel, and the small holes on the chimney were to let the smoke out. Even so, the smoke would come out in very small amount, then would disperse on the ground like fog.

We stopped at the firing range where visitors can pay for a shooting experience. Tino, Keong and SY went for a try, I was too tired (and the shooting sound was so loud it annoyed me) I sat at the resting place with a shock everytime a shot was fired.

After the rest/shooting, we continued our tour to, my favorite part, tunnel crawling! The tour guide explained to us the length of the tunnel system available for tourist (forgot to jot down), and that part of tunnels have been made larger to accommodate larger size tourists (forgot to jot down the size too). Lights were installed in the tunnel so no worries about the haunted feeling.

Before we went in, again the tour guide advised us to keep moving because the ventilation underground is not good at all and staying in the tunnel for too long can be very hot and muggy, and, of course, to becareful. I was the first in our group to enter the tunnel. In front of us was a group of Japanese tourists who kept talking and yelling and shouting and expressing their excitement. The only word I could understand (and still remember up til now) was 'Su-go-yi!!'  hope I get the spelling right. They were like saying that for hundred times every 1m crawling, along with non-stop conversations between themselves, and not only they crawled kinda slow, they stopped for too many times! Kill me please.

Thank goodness there was an exit after, I think, 50m of crawling, and there was a guard/staff assisting those who wanted to go out. After all the Japanese went out, I was like, "I seriously not feeling enough. I need more!!", so I asked the guard if I can continue the crawling, since the light extended to the next stretch of the tunnel. The guard was surprised, but he made his way for me and simply said "Go ahead!!" :D

However, as the tunnel ahead seemed to be darker than the previous one, and the guard did say the tunnel gets narrower, so I waited for more members from our group to see if they wanted to join me, and after the first five was OK, I immediately zoomed through the tunnel with excitement! The mid way of the tunnel was indeed very narrow, so narrow that I had to literally shrink my shoulder and squeezed my bag into myself tighter to get through!

After the tunnel crawling, we watched the documentaries about the Vietnam War and the tunnel system, and called it a day. It took us two hours to go back HCM City.

Since everyone praises the awesomeness of 'Saigon Centre', after the driver dropped us at town centre, we walked our way to the 'awesome' part of the city. 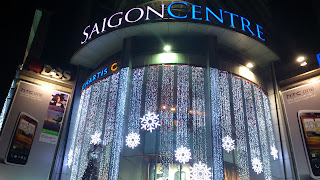 Saigon Centre is located at Le Loi Boulevard, surrounded by some other 'awesome' buildings and heavy traffic. Frankly, I was disappointed. Although the exterior looks pretty awesome like Pavillion, the interior, OK it's more or less like the exquisite and high class shops like Lot 10, but very less shops and pretty boring.

Some funny encounter occurred. We tried to look for a 'convenience store' in Saigon Centre, the information counter directed us to The Spa at the third floor and the 'convenience store' turned out to be the teeny tiny one next to the spa. Came down embarrassed, the guard suggested us to visit Vincom Centre which was officially open on that particular day. 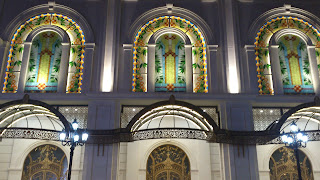 Compared to Saigon Centre, Vincom Centre looks more elegant and magnificent, and since it's newly open, the operating shops were only handful much, but definitely more shops than the former. One more funny encounter: this time around, we tried to look for 'Parkson', and I found one 'Pakerson' in the shopping guide; assuming they have the 'usual' spelling error, we looked for the shop and it turned out that 'Pakerson' is a clothing shop and I was so freaking wrong! =P We shopped for awhile in the convenience store there, and they accept only Vietnam Dong but no USD! (The exclamation mark is because that time I was VND broke and USD rich -_-)

We walked back to Ben Thanh Market for dinner and extra souvenir shopping. Since it's our last night there, we decided to have a better/luxury-er dinner. We chose one of the seafood stalls at the market, and indeed it was our most expensive meal throughout the trip - approx 1million VND, if I'm not mistaken. 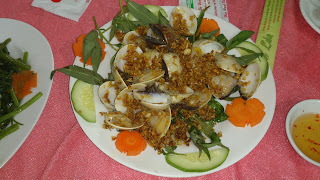 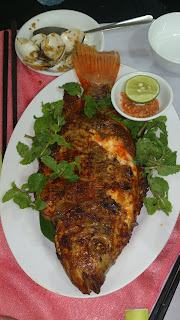