DQ3768 is my grandparents' official car, and we (ermm... I'm not sure about others but I am) are recognising the house by our own instinct (been to-fro the house for countless years), the car and the house itself (so all of us thought we bumped into the wrong house during CNY coz the house was painted in different theme of colors).

According to my mum, AhFai, my cousin, drove the car to Sri Cemerlang for a yamcha session, when he was to get back home, the car was eventually missing. To his surprise, he didn't park the car at any dark spot or corners, AND, come on lah~, the car is... ermm... about 20-30 years old!! I think the car is older than I am. SHIT! StoOpid thief(s)! How dare you stole the Tan family's precious property! I curse you JILAKAT bugger!!!

The car has been really a 掌门之宝 of my grandparents' house. It's still fresh in mind when I sat in the car, with my granma as the driver, drove us somewhere (I forgot where). The car was drove by my granma until she couldn't be able to drive due to her health condition, and being the great transport to my auntie to deliver the hui sit around KayBee town. I don't have very strong feeling towards that car as I hardly drove it (ermm... 3-4 times until now), but, it's still kinda 患得患失 when I knew this news. JILAKAT I curse you to be permanently cacat for the rest of your life bugger thief(s)!!!! 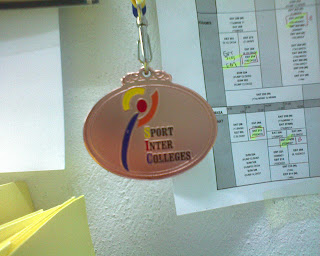 My first medal since entering UniMAP
It's the SIC game I talked about. Well, I'm glad I joined the game instead of the TKD tournament, coz this medal is a solid *Bling Bling* chio material while the TKD medal is a plastic shit. Wakakkaka! AhLeong, one of the tournament's participants, was slightly pissed off when he got that medal. TeeHEe!~
home