January 08, 2009
This would be one of the most adventurous tour I have ever been to in my whole life (until now).

When En Azmi asked me whether to follow him to the famous berek 12 for defib PPM, I was excited as usual. That time, I was in dilemma actually, because En Shaidin ajak me to go to the forensic with him to pass some forms, I was excited about that too! But since it's just passing forms and stuff, I decided to follow En Azmi instead.

At first, I was expecting to meet some 自闭 patients, sitting at the corner staring at the wall or ceiling or sky and termenung.

When I really met them, I was in a complete shock. +.+

Not only they are NOT termenung AT ALL, they are a group of extremely talkative people! And one crucial point is that: they look like they are completely normal; except they show their true color when they start to talk.

The first ward I entered was the female ward. En Azmi took us to the 'visitor area'. They are kept behind iron bars, in a spacious yard, with a canteen-alike room with chairs, and that's it. So we are actually confront face to face with them, but they cannot approach us as they are blocked by the iron bars (doors and windows).

The female side was quite normal. They looked (or perhaps I would say: stare) at when we opened the door and walked inside. They greeted us, and started to talk, and talk and talk. I hardly understood what the heck they actually say, but they just won't stop talking.

Then we went to another ward. This time, the people were more towards the normal stage. I really should aware how ridiculous En Azmi can be! He asked the patients whether we can go in their room anot.. Aduih! (but of course he's just joking laR~) The way one of the guys replied really proved that they are quite normal:

"Cannot! They are girls (As and I)! This is room for boys! They cannot come in!"
Gee~ I was so relieved!

Then we went into the ECT (Electroconvulsive Therapy) room, there's one defib there. It is the therapy room where the specialist will induce low frequency electric stimulus via electrode applied to scalp, or, in other words: shock the patient's brain lor~ 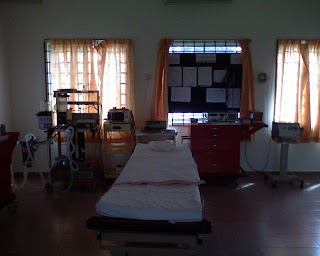 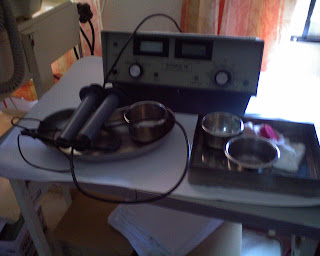 Finally, En Azmi took us to the male ward. Oh GOSH nightmare this time! They are extremely friendly and talkative! One of the patients can speak some VERY simple mandarin, and since he saw me, he kept on saying:"Itu yang pakai spec tu (I'm the only one wearing spec), awak Cina kan? Saya boleh cakap Cina tau! 一二三四我爱你恭喜恭喜恭喜你啊我不鸡到"... and he repeat and repeat and repeat the same sentence over and over again. Aduih~

Then, a mother of one of the patients came in to see her son. The guy salam and kissed her hand, and they started to share the food the mother brought. En Azmi asked the guy why did he come in here. Again, I hardly catched what he is actually talking about, then his mother explained. Rupa-rupanya he was an MA in an institution or something like that in Selangor, 3 months before he graduated, his fiance putus tunang with him. Since then, like this he is. Hmm... Everyone has their own stories right?

Finally, we decided to leave. Before that, En Azmi and Hafiz went into the female ward again for documents thingy. Then there's this conversation really tickles me!

Until today, the only ward I haven't visit in HKB will be the forensic! Gee~
LI