The Chronicles of M&M - Progress

August 18, 2012
I felt sorry for not talking about them for quite some time in this blog, as it is now mainly about my adorable LinLin B, usual life stories and lack of blogging literally. So here we go... 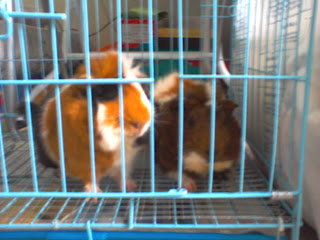 Both Mozzie and Manny have grown so much now, and they ate a lot more too. Now that we mention them, they are one year old!! Of course Moz is 1-2 weeks younger than Man, but who cares~


Moz is growing rounder and rounder now, his ass is HUGE! He now measures 960g.


Although he is the bigger size piggie, but he appears to be 'weaker' than his older bro. For the past two months, he had diarrhea for 1-2 days with unknown reason (since both of them share the same diet and the bro is all well), and the good timing of diarrhea too - right AFTER I change their bedding -_-


Since both of them has grown day by day, modification of their cages is the biggest challenge ever. Hay rack, sleep place, hiding place, food corner etc etc have to be considered of, and also the easiest way for other caretakers to clean after them when I am away.