Balik kampung on Tuesday night by bus for the car's road tax and some bank settlement thingy. 'Everyone' thought my dad came to fetch me (meaning I drive back) or something, which was kinda random and totally amusing LOL.

'ya know every time I come back home, there will be stories about Little One. Please wait patiently, there are tonnes of photos and stories to tell because she's grown, even though it's just a month I don't meet her! ^^

About the promotion thingy, I knew it through FB when a friend shared the promotion brochure picture, and I was delighted as the first promotion date was on the day I would be at home!! Yay!! 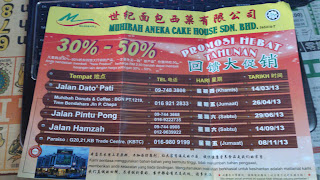 Then I found the brochure on the 'phone charging section' when I got home, double *Yay*!! 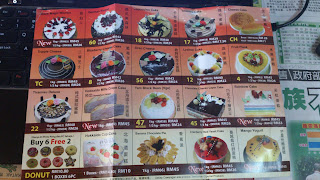 Shared the news with Da Jie, actually to persuade her and discuss which to buy. We sorted to the 'Yam Black Bean' and 'Cranberry Red Yeast Cake'. Wanted to try the 'Black Magic Women' but sis claimed it might be similar with Black Forest; she didn't convince enough with the quality of the Mille Crepe cake; so on so forth ad nauseam.

The first promotion is on 14th March (today) at Jalan Dato Pati, the previous Mitsutake Cake House. I was clueless with the date wondering why wouldn't it be held on Friday, weekend in Kelantan. Da Jie was like, "They do it on weekdays so that not many people can go to purchase mah~ If they do it on Friday, everyone can go, and they gonna rugi so much!! Of course they are not stupid~" This proves I am so NOT a doing business material LOL...

Dragged Little One along when we went out to take lunch from aunty's place and to buy the cake, considering the limited parking at that area. When mom handed over the money and asked how much would it cost, I told her about RM50 for 2 cakes, and she was all shocked and said, "This IS expensive! RM50 is like a regular price already! I won't let you buy if it's RM50, toooo expensive!"

OK so I bought one, the 'Yam Black Bean'. 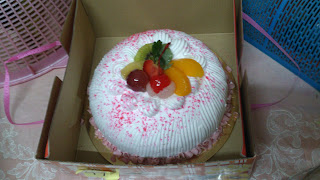 It stated this is a 'veggie' cake, as there is no egg in the cake. Mandarin name is 山药黑豆蛋糕. The half kg costs RM24. The significant difference between the picture and the real thing would be, the fruits on the picture is a lot more than what's on the cake. I love the taste so much, as it is not too sweet, the icing and yam cream is totally awesome! Can't differentiate the 'no egg' part though...

Then, mom went out for some chores and came back home with ----

I have a happy tummy now :) as well as the apa-pun-makan Little One ^^
food