July 31, 2014
Last weekend, Hon had a BBKZ (bei bao ke zhan - Backpackers Club) gathering/staycation at The Shorea, Negeri Sembilan. One friend couldn't make it so I kinda took her place last minute. Yup, I wasn't involved in the first place, and I was a little regret of joining.


We reached Seremban at 10.30am and had our brunch at Yi Poh Restaurant (Jalan Seng Meng Lee, Seremban). 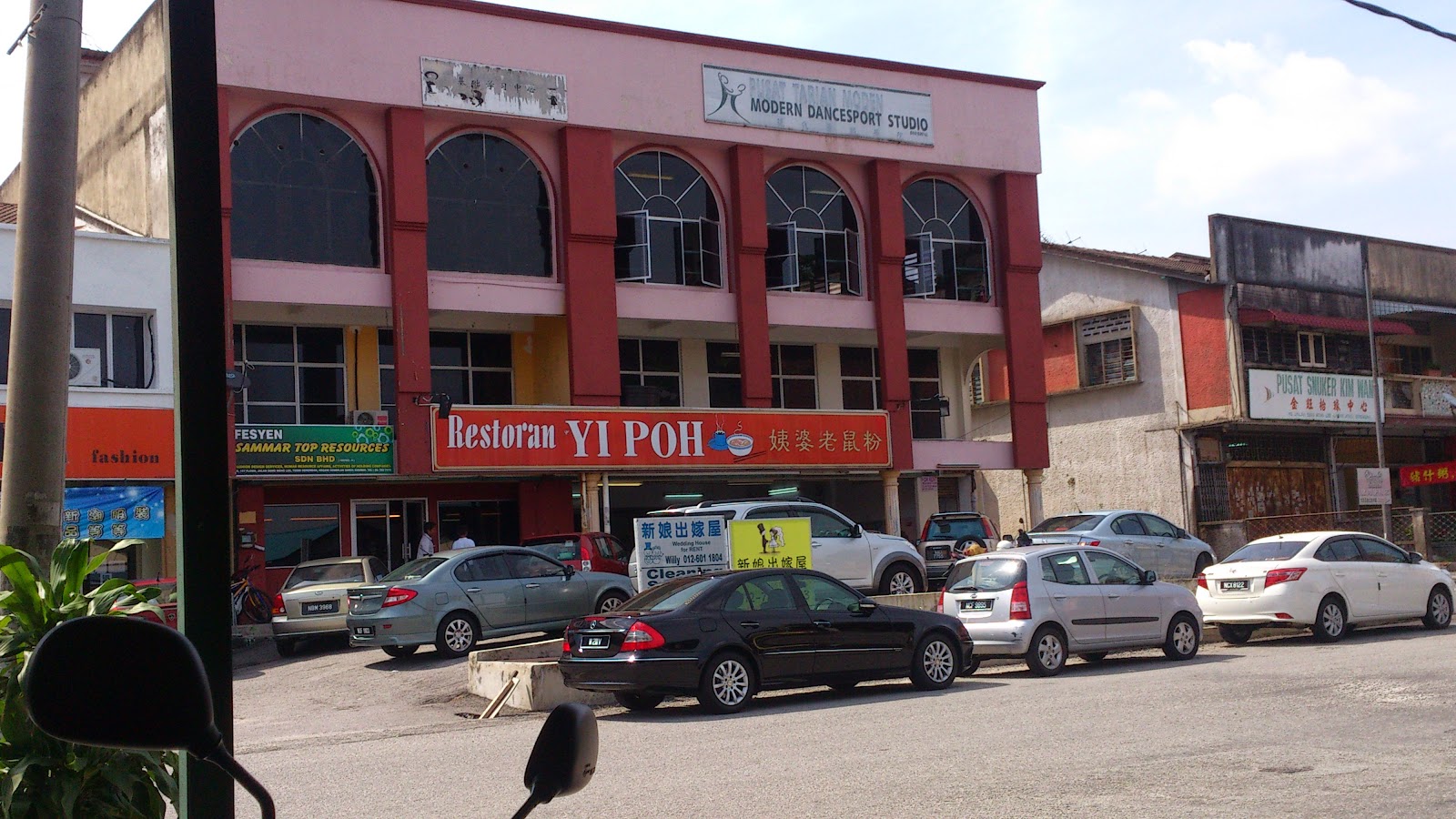 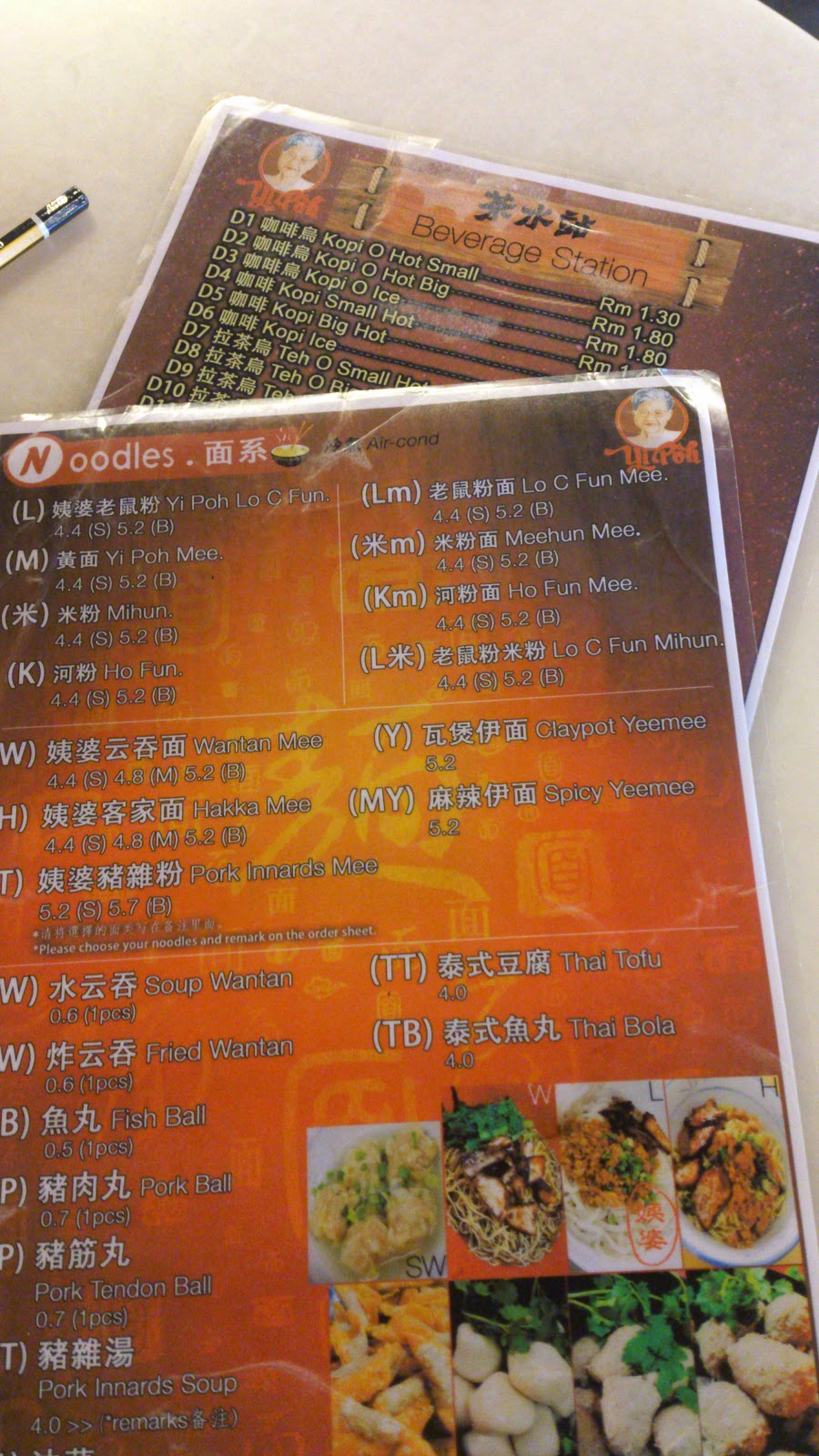 Yi Poh Restaurant is famous of their lou shu fun (literal translate: rat noodle). So I ordered one. 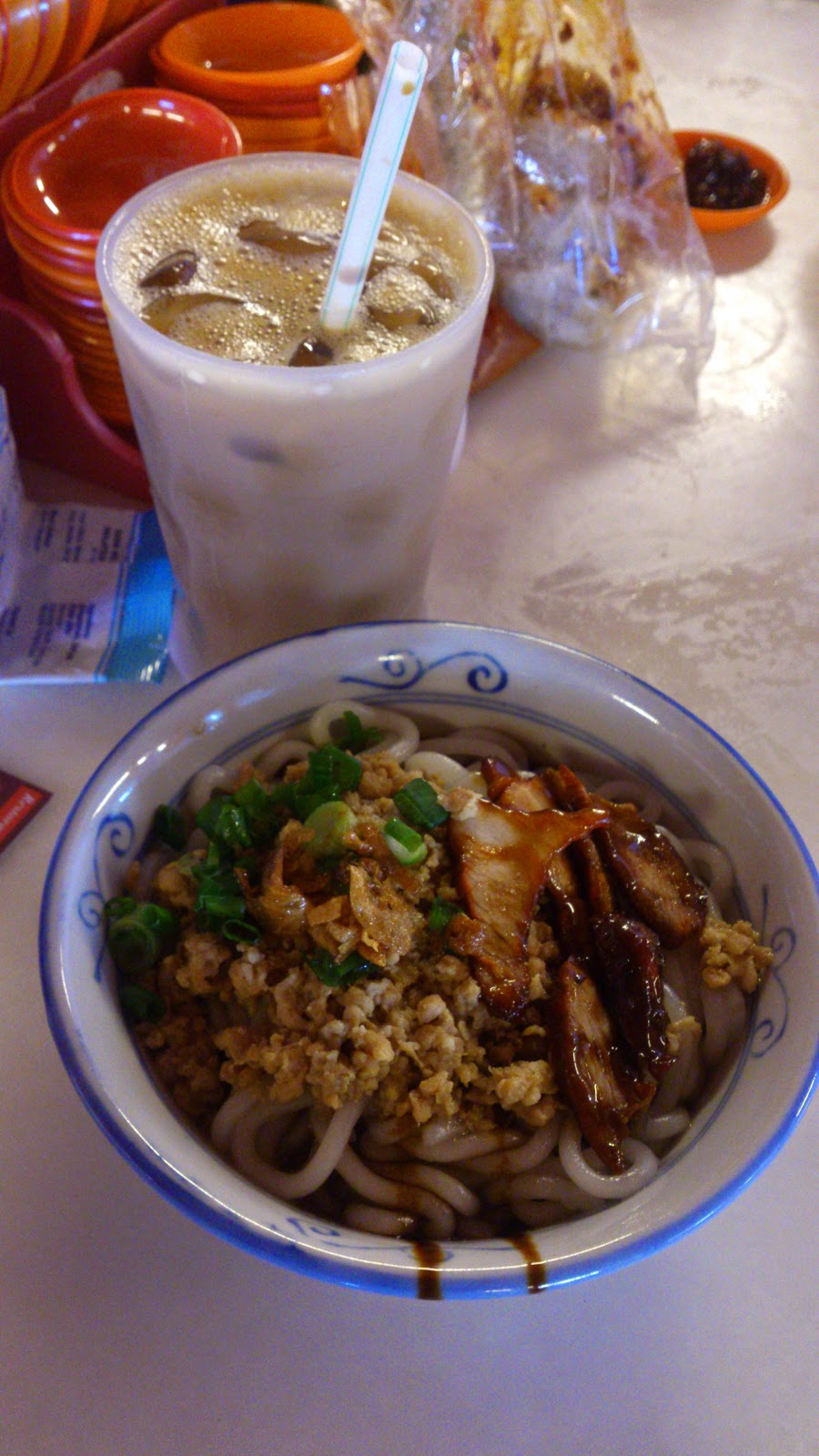 At first, I was skeptical as it didn't look like the usual lou shu fun we have, but I must say, it tastes sooooo good! It seemed like the whole bowl was made up by a single strand of noodle, so long, and so Q chewy. I had a slight upset tummy so I had to pass the final two feeds to Hon after he finished his Hakka mee.

After the meal, we went to the opposite to buy some authentic Seremban Siew Pau as tea time dessert. 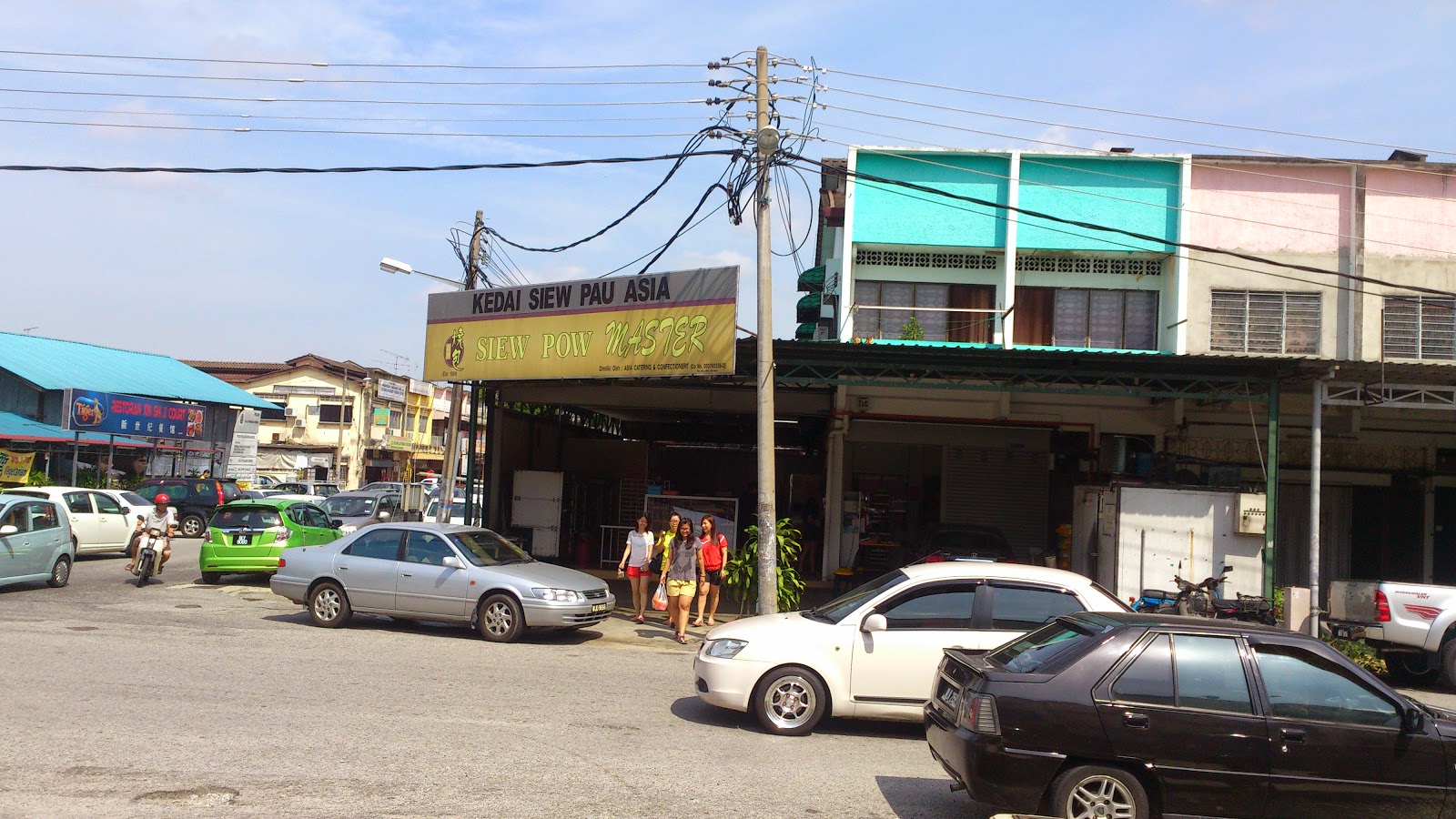 Then, we headed to Jeram Toi for a waterfall dip while waiting buddies from Ipoh and Johor to get to Seremban. Jeram Toi is between Seremban and Kuala Kelawang. Easy access, four lane roads, nice entrance. 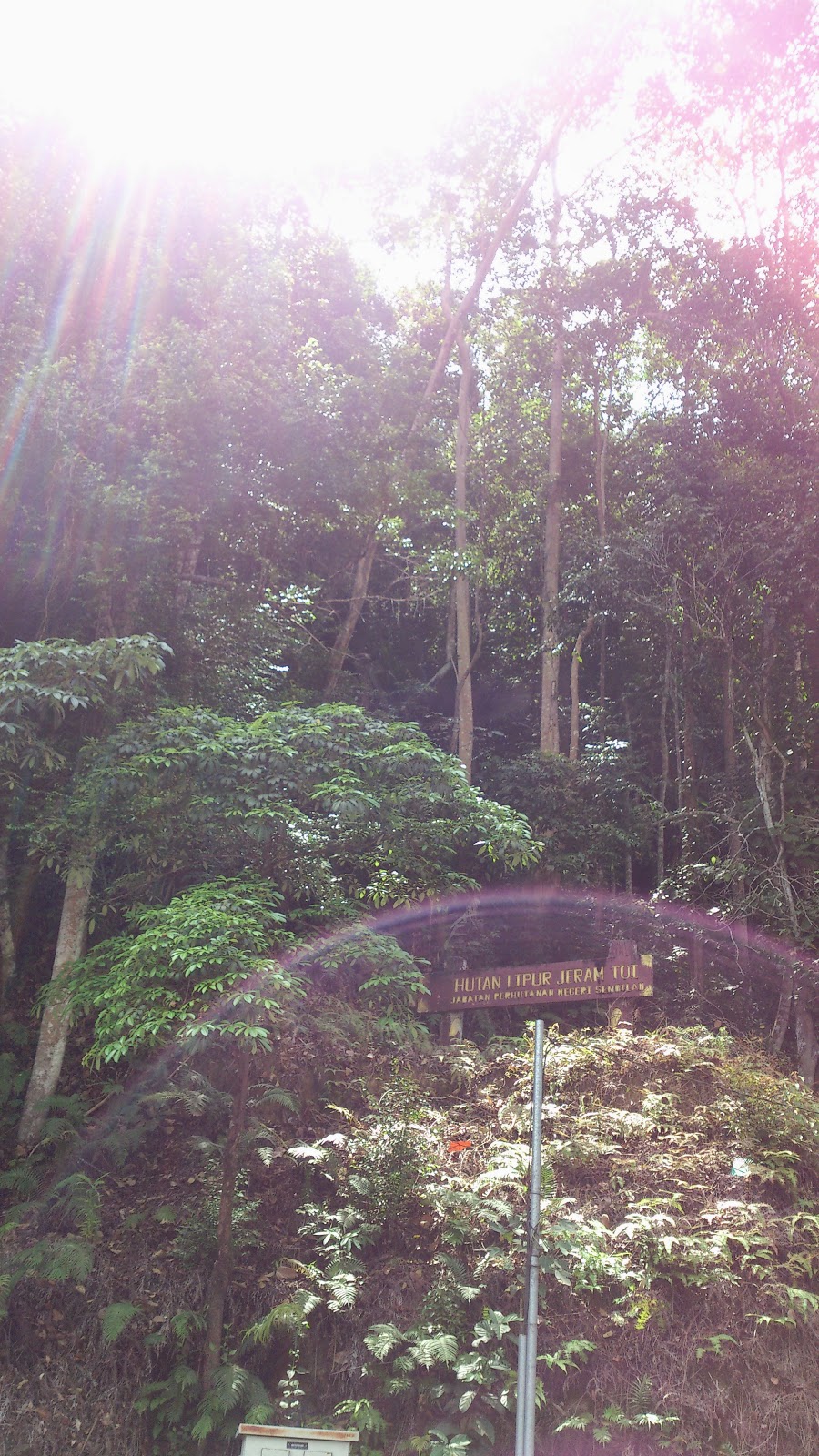 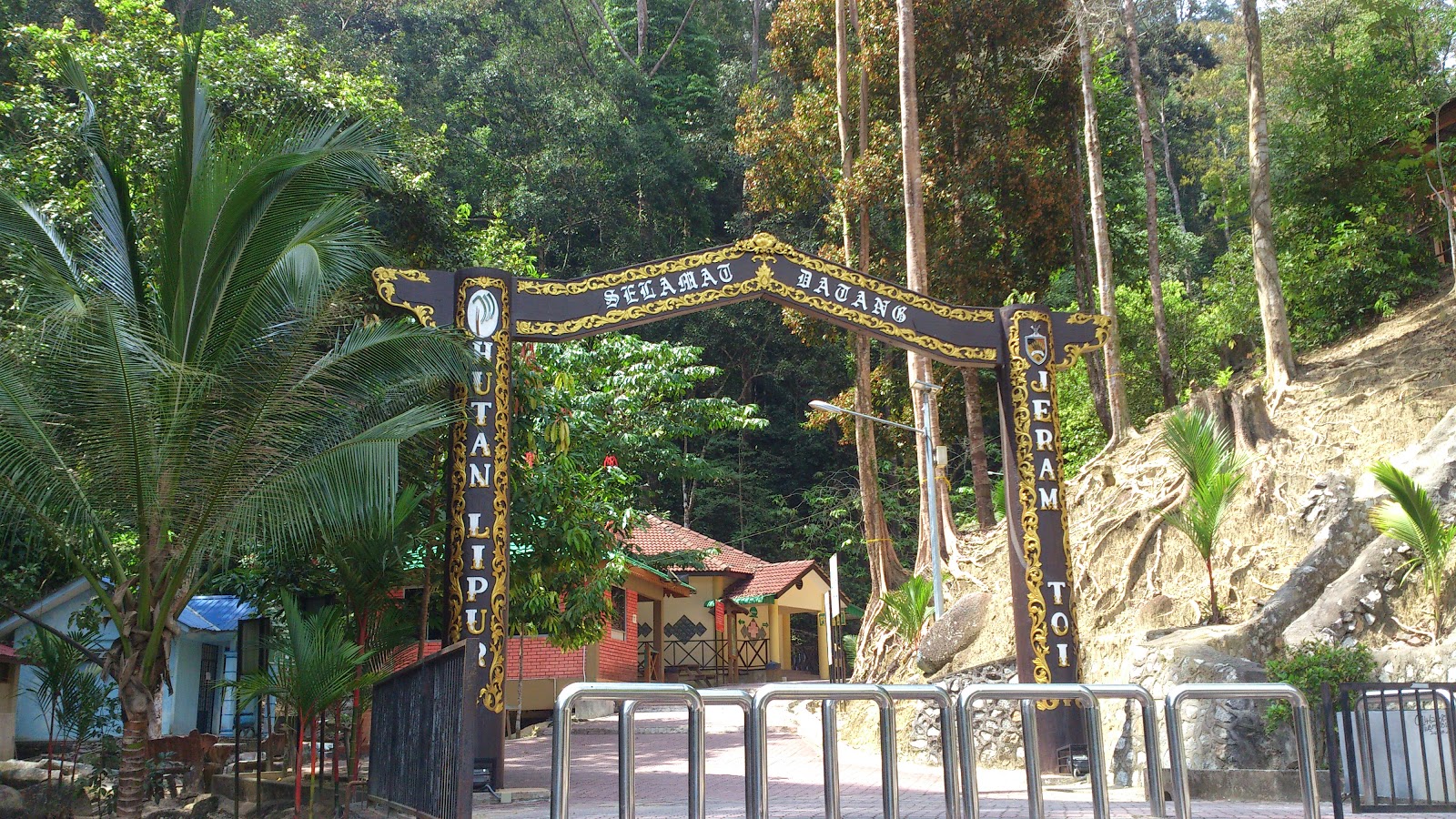 There is a huge pool at the lowest tier of the waterfall, which was not our option as always. Lowest tier means it accumulates all the 'dirty' fluid from the upper tier, plus it didn't look clean or pleasant, so we moved up to the higher tier. Minimal hiking is required on man-crafted stone stairs, intermediate level. 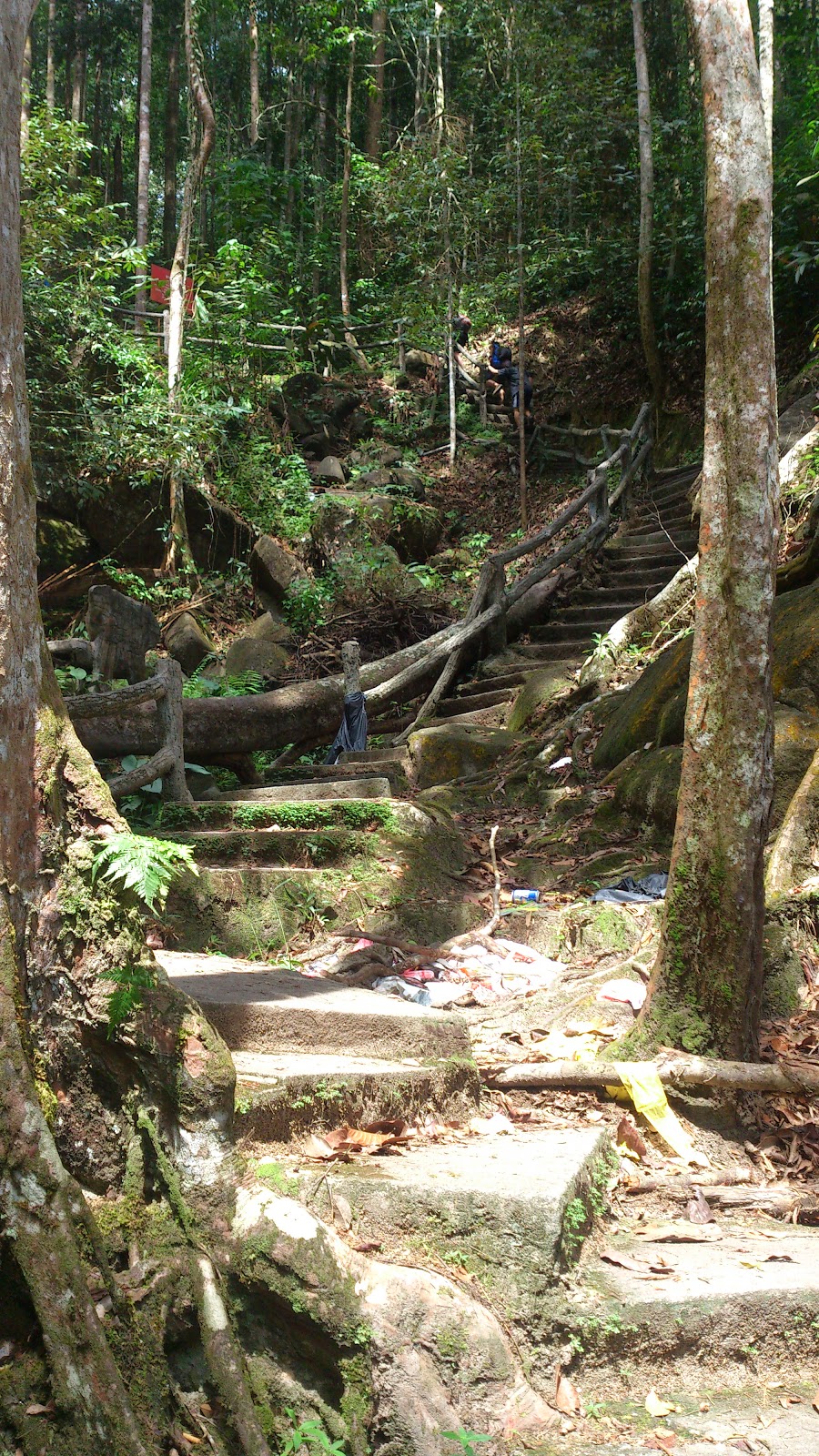 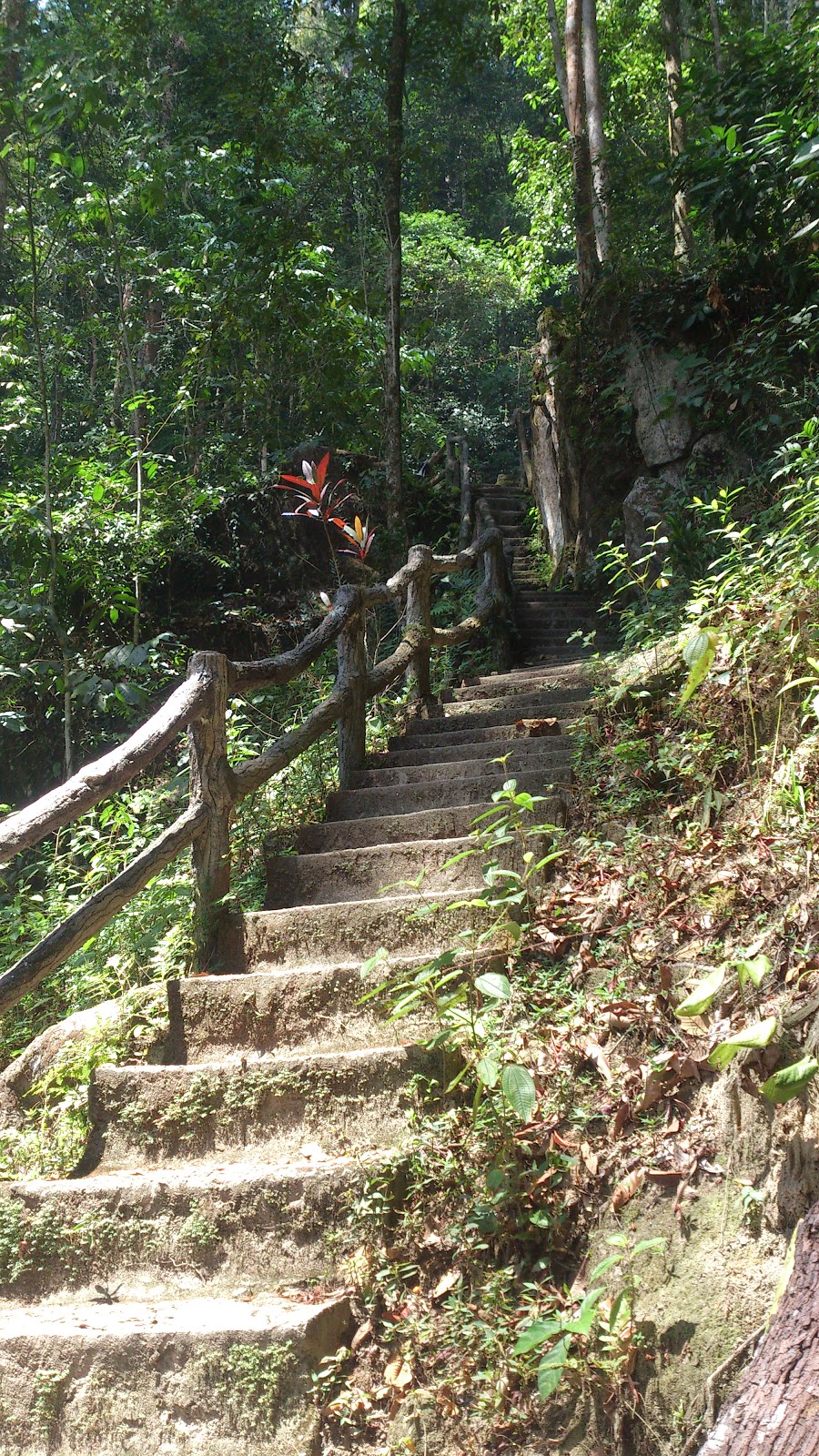 We settled at the third tier, with nice strong beautiful falls but very small pool, enough for two. We wanted to stop at the second tier (limited our hiking distance) but there's some guys doing weird stuff, so tak jadi loh~

However, whenever there's human, there's this eyesore situation... 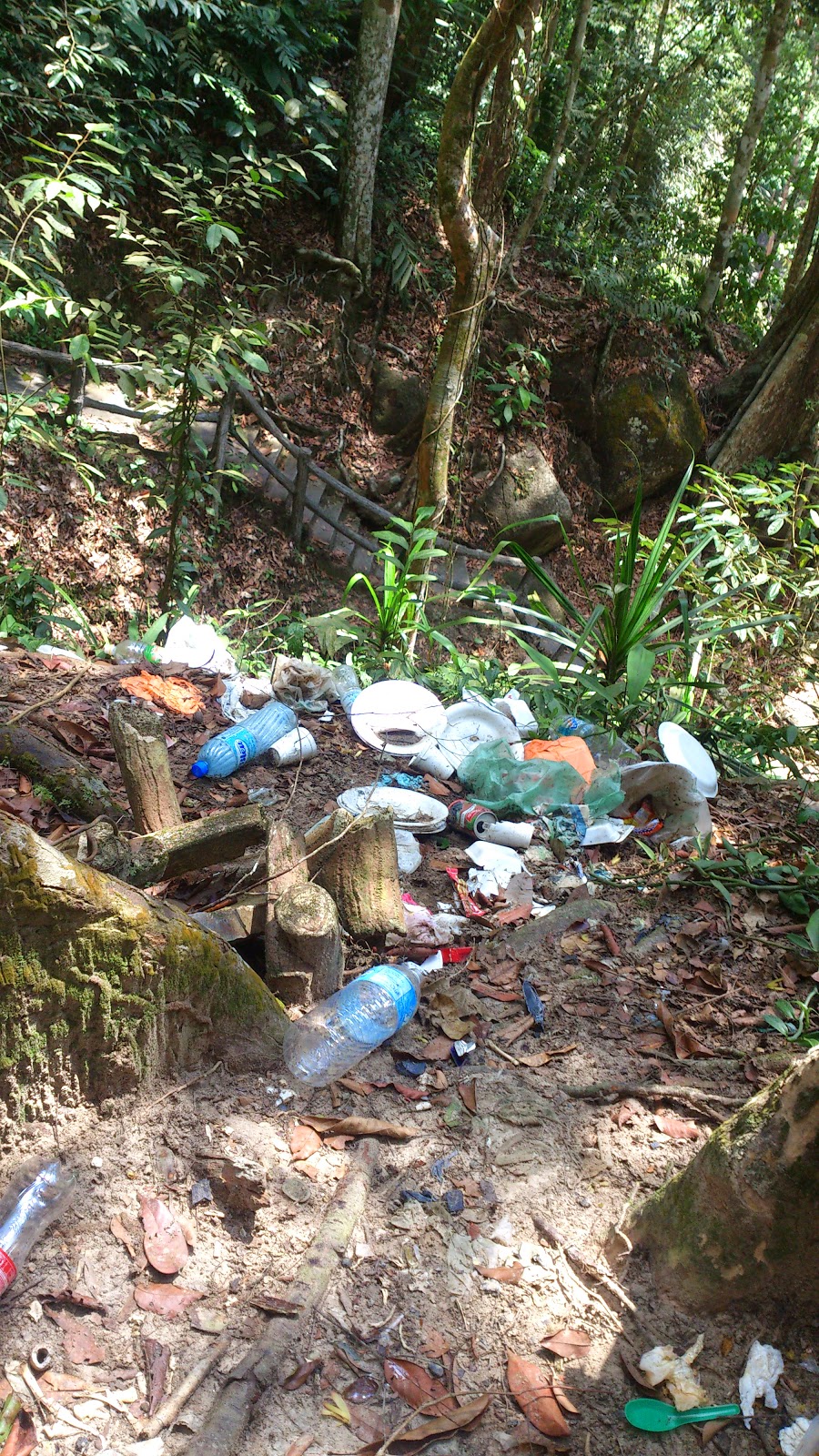 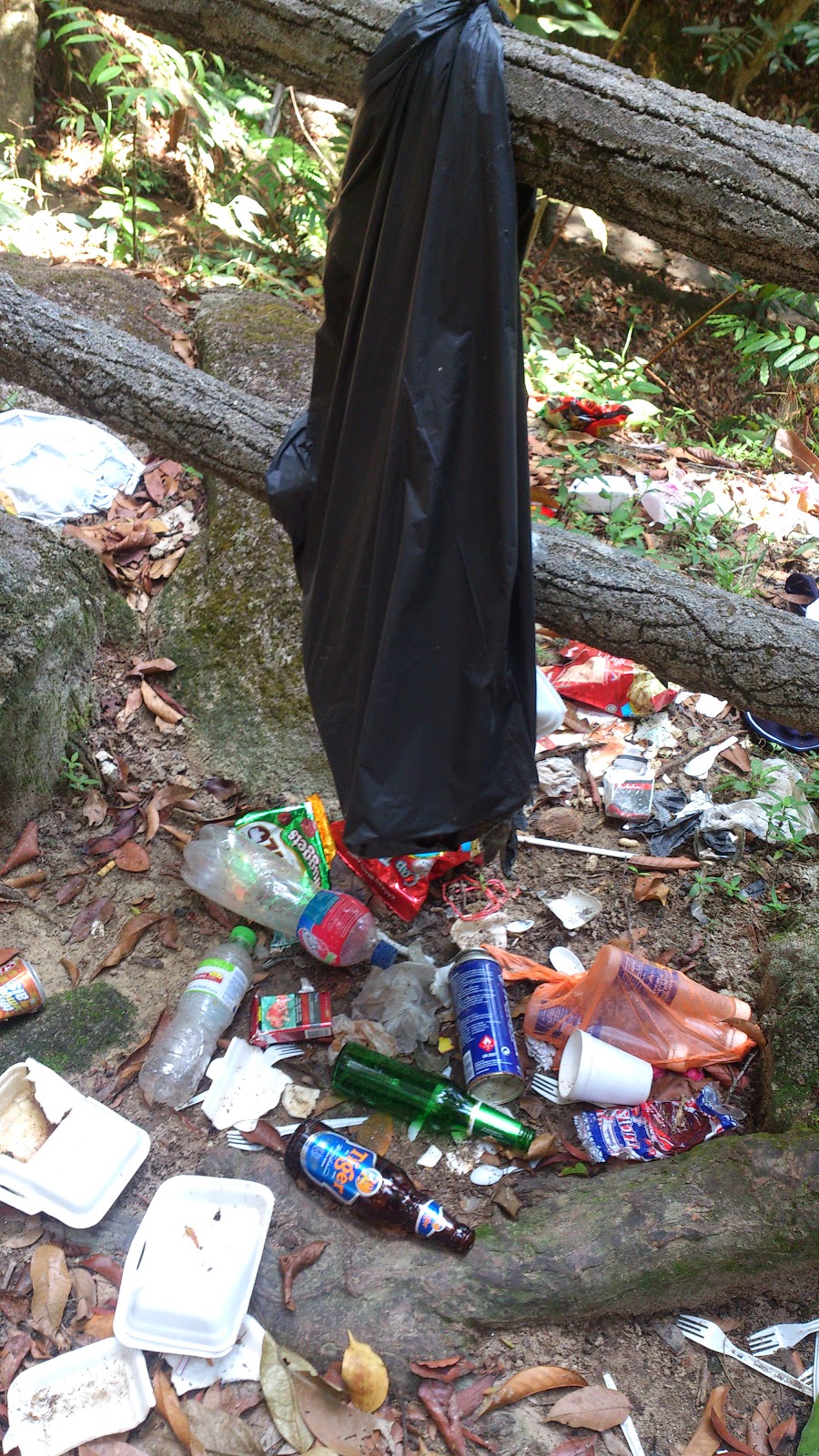 Black plastic bags were hang at almost every tier, and I think some people do have the awareness and throw their rubbish into the rubbish bags, but the bags were ripped, probably by the monkeys, and the rubbish were scattered all over the place. Rubbish were seen at every single tier... All kinds of rubbish!! Please lah visitors, can you please carry your garbage away along with you when you leave pleaseeeee?

Update: Few weeks ago (11 Oct 2014 to be exact), Jeram Toi was closed after four youths contracted leptospirosis or rat urine disease. Hon and I discussed about it and we agreed the park really need to gotong royong or makeover or spring cleaning because it was too damn dirty!! Look at the rubbish!! Such an eye sore!!!


When the friends finally arrived, we cleaned up, changed, headed to the Jelebu town for lunch, and straight to the main agenda of this trip - The Shorea.


Look nice hor? I must admit the view is indeed spectacular, the infinity pool is awesome, but...

...but the management very teruk. Like Hon's title on his review in TripAdvisor: first class resort low class attitude.

Before the trip, there was some mismanagement going on and upsets everyone. I summarized Hon's and Raymond's (this gathering's organiser) TripAdvisor reviews here to illustrate the story:


So many masalah!!! Summore the rate so expensive, we had to pay RM500 per person ok??

The junction to get to the resort is through a Malay housing estate and slowly the road narrowing into a one-car-only road with fruit orchards at the road sides. 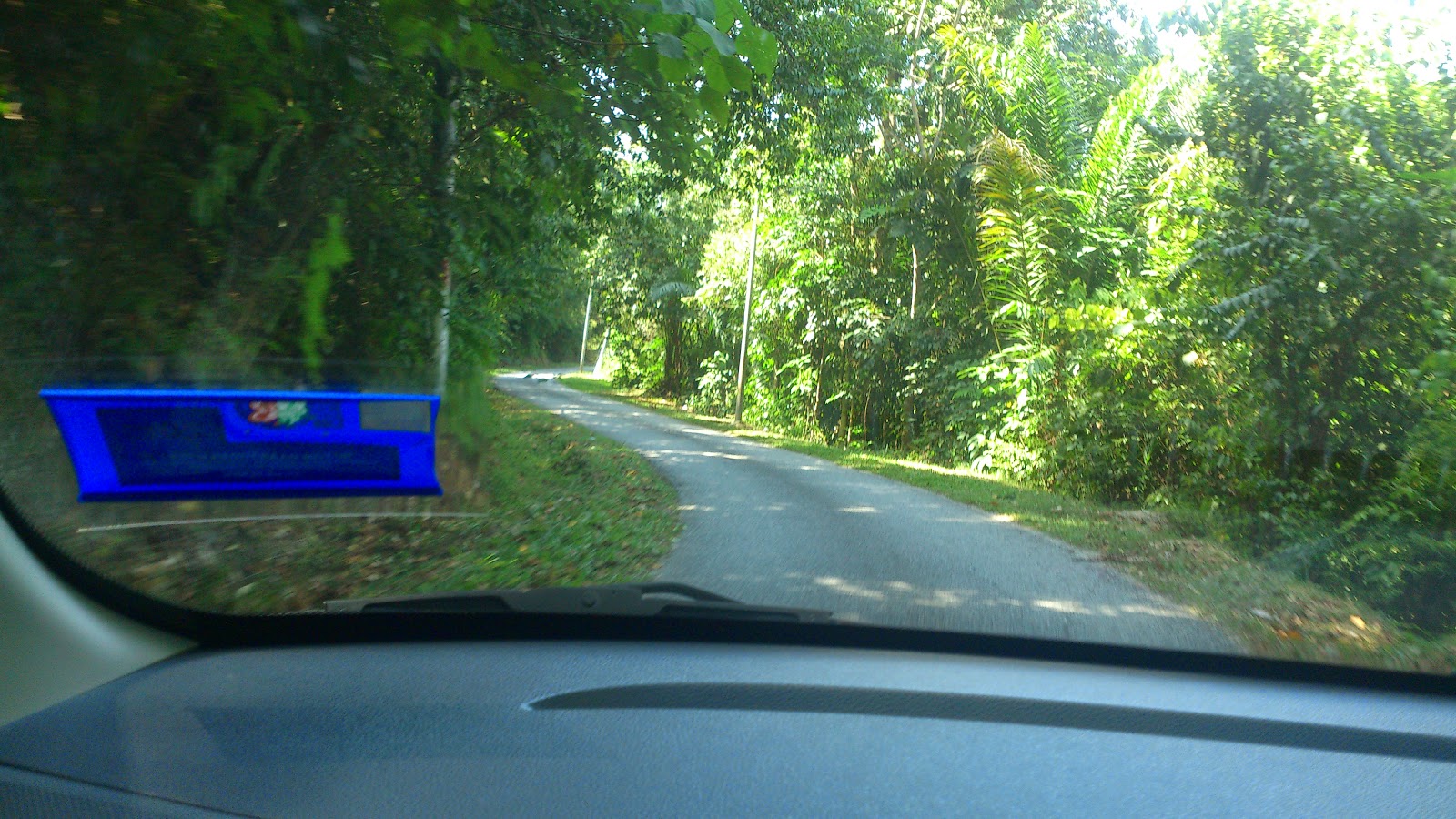 Then drive drive drive until we also get confused and uncertain about the resort's whereabouts, and we stomped on the locked gate with a sign said "The Shore - one forest one resort" at the side... 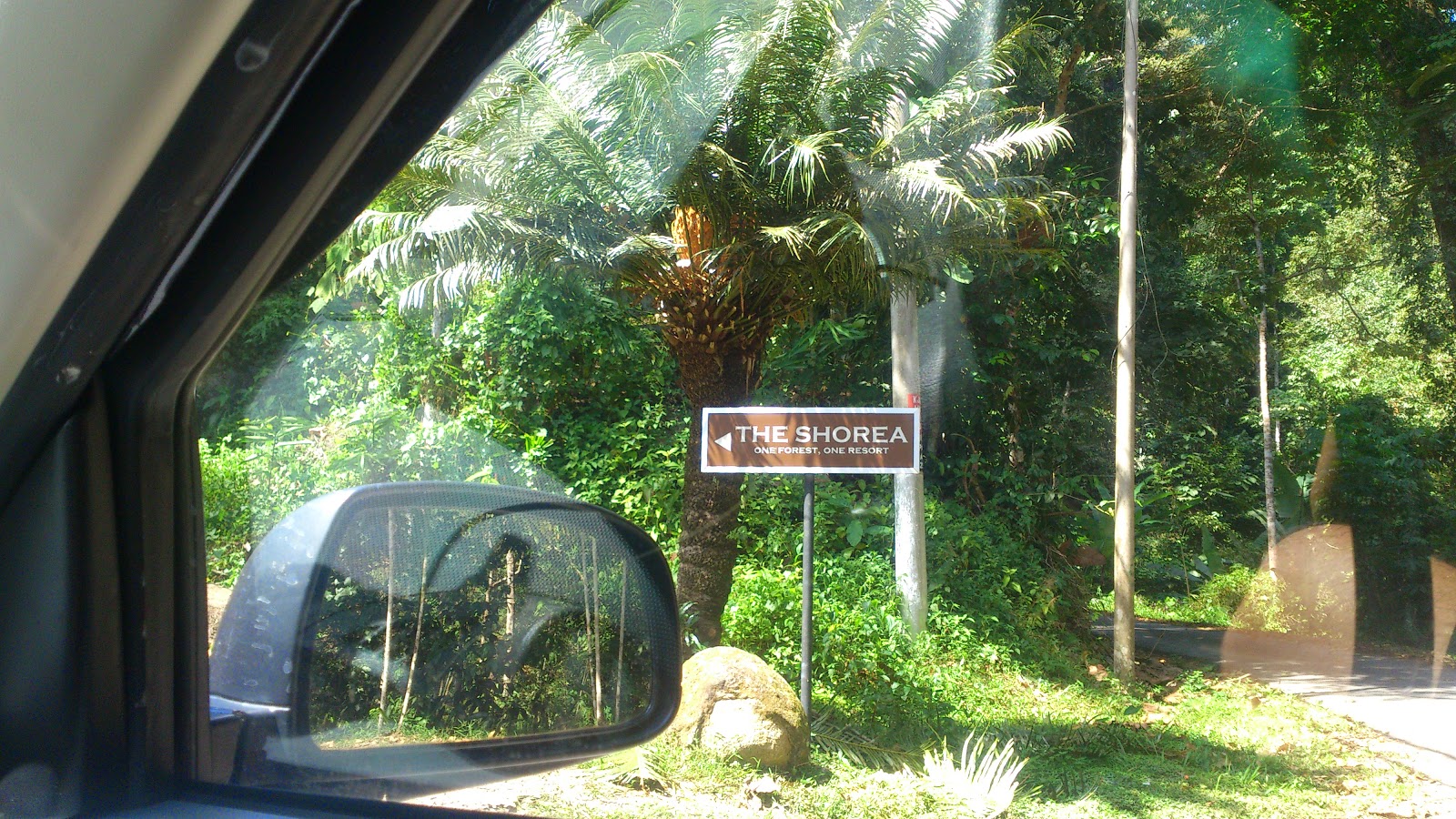 ...which is false advertising because at that forest got few more resorts nah like The Dusun and Awanmulan don't cheat the customers!

I have to say, this is one quite guai-lan resort with a lot of strict house rules (check it out in the Check Rate section in their website), like speak softly after sun down (one guest did gave such review in TA, which the housekeeper told us it's actually the guests in other resorts and the Orang Asli in the forest complaint about the noise); no techno/noisy music and no rowdy party; silence after midnight - some did make sense lah but because the manager is guai-lan so I say they are guai-lan lah~

Then about the gate, in the conversation between Raymond and Elaine, you have to call the housekeeper for them to come open the gate, and you need to follow her to the resort. At that time, there was another lady in BMW wanted to visit her friend in THE SHOREA, which to our surprise coz we thought we booked the whole resort dy!

Finally we arrived the resort. The girl left shortly after we reached.

Again, I have to say, this is indeed a really nice cozy resort. It is in the middle of forest, the infinity salted-water pool is to die for, overlooking the greenish mountain and trees, when it hits the night it is very windy and cold! The bed is super comfy and the pillow is heavenly! (which some people donno how to appreciate) Fresh air, cozy wind, shiok! Our room's bathroom in the Villa Shorea is open air, so you can see the banana trees peeking on you when you sit on the toilet bowl pangsai (which can be creepy in the middle of the night). However, there is no privacy at all in the resort. The villas are interconnected with each other, the walls are built with planks and woods - with spaces in between, and you can see the beds and the people on the bed, so no yai-yai moments between couples. 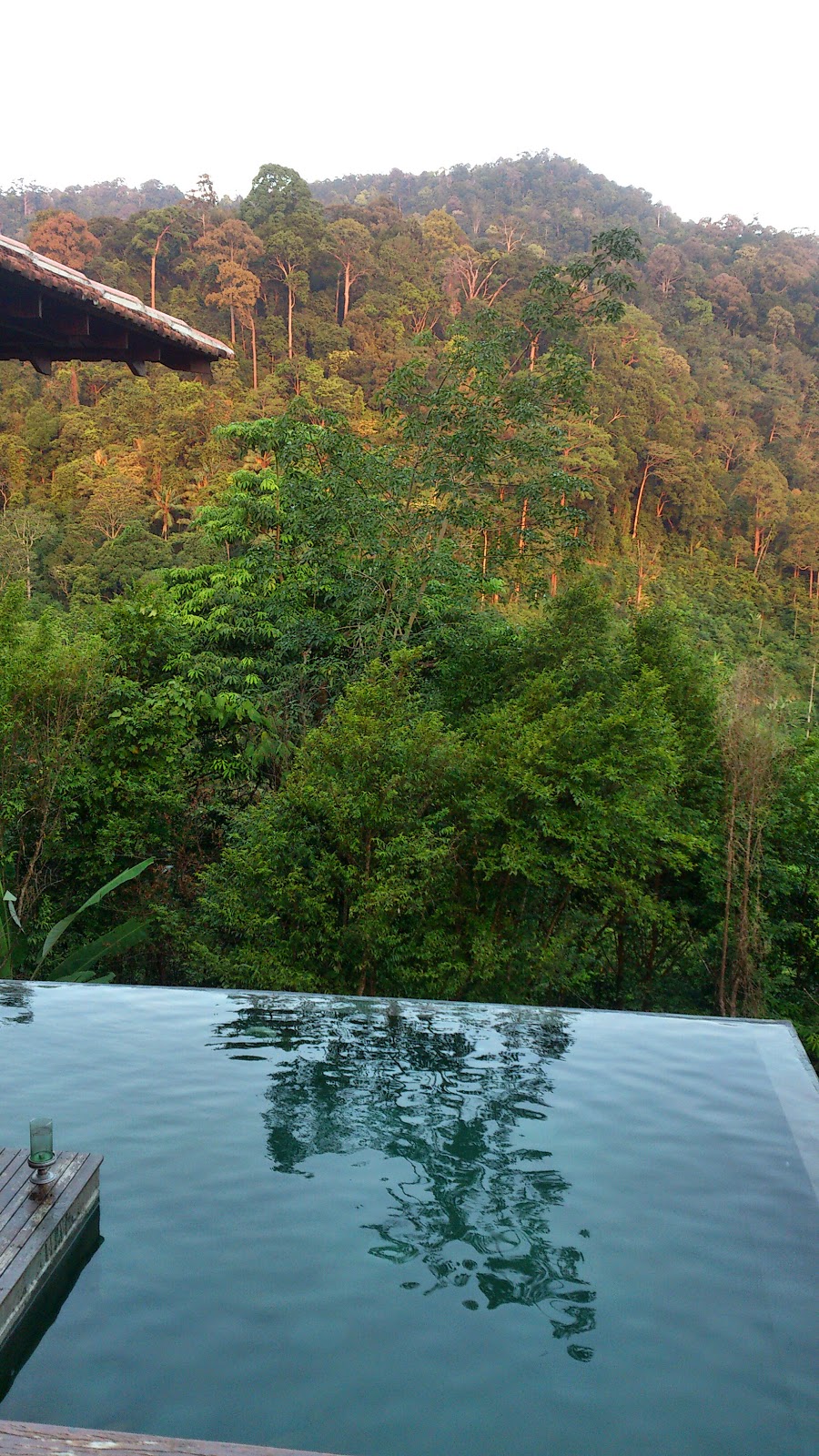 Here comes the sour part. I didn't take the high tea pictures coz I thought there were more stuff, unfortunately all I saw were the local kuihs and simple finger sandwiches and that's it. Summore need to bancuh your own coffee and tea. So-called high tea - just because you use 3 tier pastries stand doesn't make the tea high, not at all... Picture is grabbed from Cherie Ma

Then comes dinner. Please note that what you see is a RM65/pax BBQ dinner for 22 people. 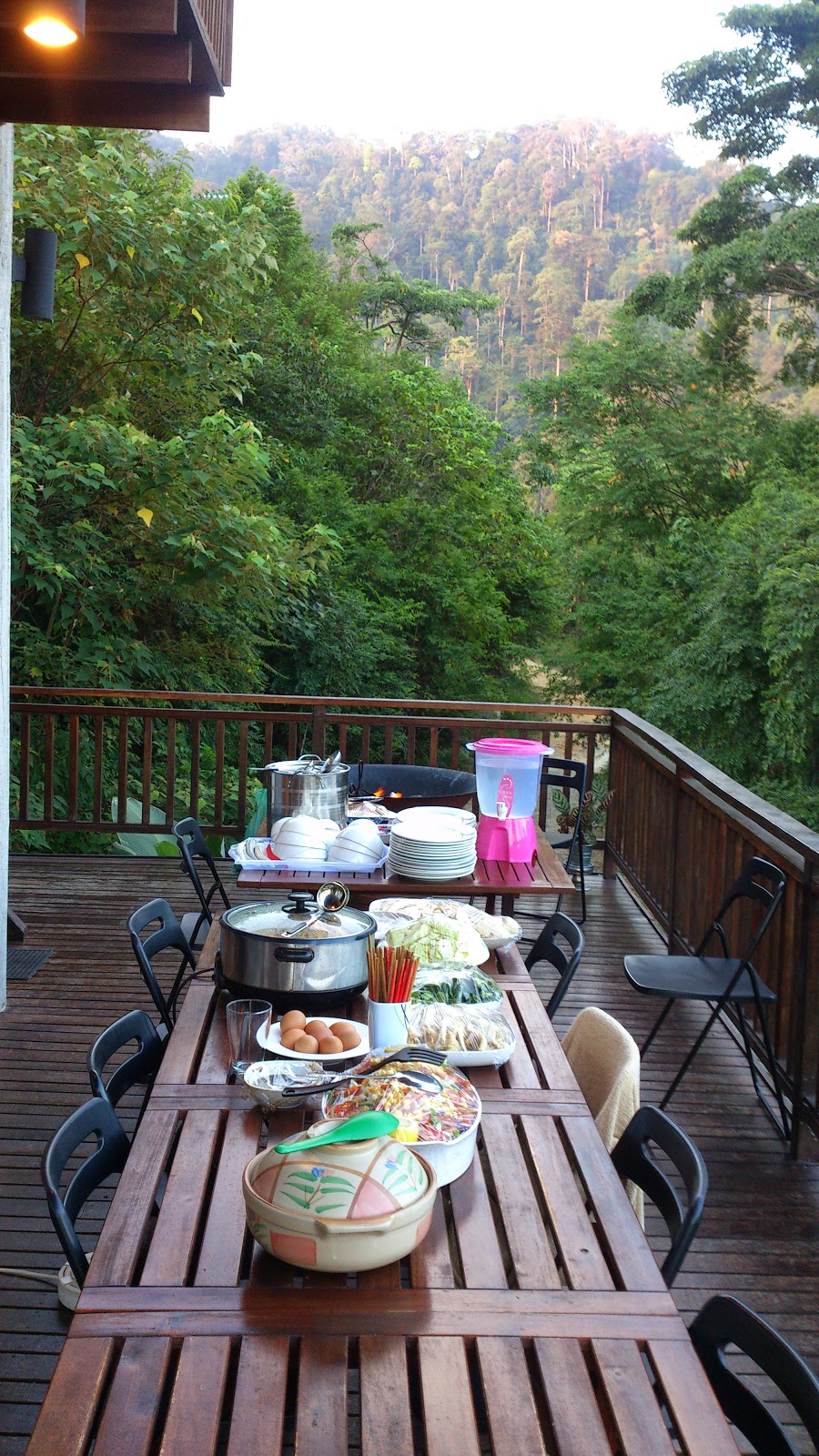 This was the first round. There's a bowl for steamboat and a spare soup in another bowl; one bowl of fried rice; and what I saw was chicken wings, lamb, shrimp etc for BBQ.


The fried rice finished at almost 30 min after dinner started, the portion was just enough for every person to have 2 filling using the smallest rice bowl. The steamboat was OK, but the soup (plus the spare one) was just enough for 4-5 boiling period and finished at about 1 hour while waiting for the food at the BBQ section. Most of us couples shared the food.

From time to time, the day and night shift housekeepers took out food from the fridge to serve. Nothing fancy though, scrappy chicken meat, cheap local fishes, potatoes, potatoes and more potatoes.

Later that night, Hon and Kok Hou (Cherie's bf) got to their creative mind and deep fried all the food, and it was selling fast hahaha.

And you telling me this is worth almost RM1500? Hahaha you go join Raja Lawak I think you can win first prize. It's not worthy even when it costs RM50/pax, and I can't imagine how horrible it will be if we were given the RM50 dinner set.

Breakfast was the usual Nasi Lemak. 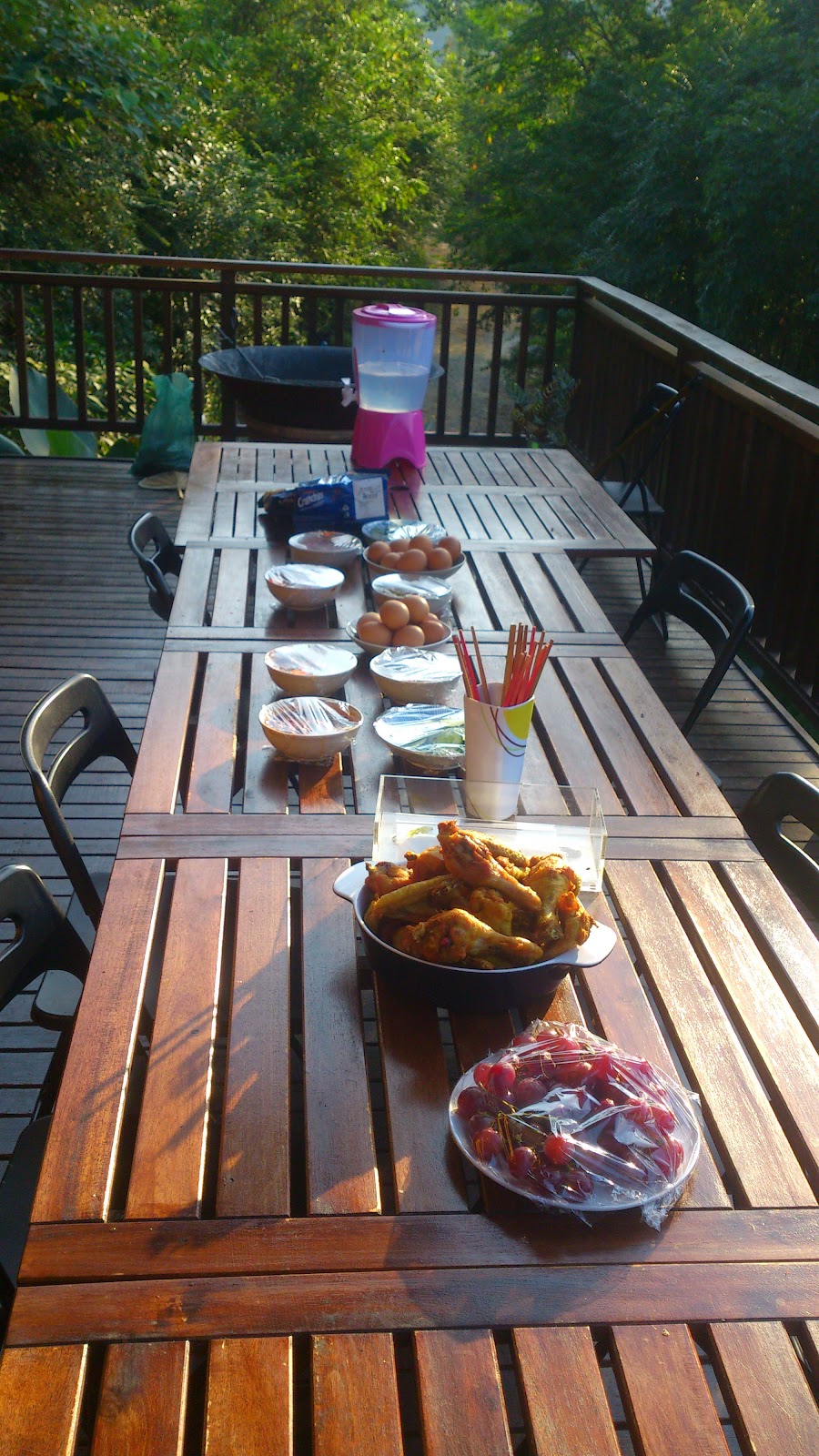 After the housekeepers done preparing and served our breakfast, they were busy preparing lunch for the owner who would come to the resort at noon. We wanted to wait until he/she/they arrived and had a talk, but it was nearing checkout time and batang hidung pun tak nampak. So we left with disappointment and grudge.

We stopped by Seremban to have baked crab as farewell lunch.

No more to the resort, and no more to join 'stranger' group. I felt out of place as I'm becoming more and more socially awkward person. Prefer a close mates heart-to-heart chit chat like what I had with Jas and Shien when Jas was in town hehe.
trip